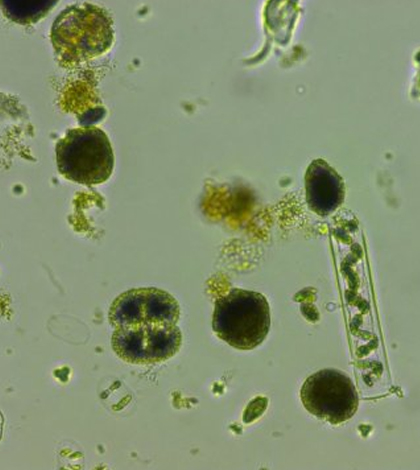 Phytoplankton diversity and photosynthesis have been boosted by warmer temperatures. (Credit: Gabriel Yvon-Durocher)

While some species experience stress or reductions in numbers due to higher temperatures, phytoplankton seem to experience enhanced biodiversity, potentially boosting their ability to survive and thrive in warmer temperatures, according to a release from the University of Exeter. Not only do phytoplankton show evidence of higher biodiversity at increased temperatures, they also seem to experience enhanced photosynthesis, further increasing their ability to utilize carbon dioxide, researchers have found.

Phytoplankton were identified, counted and measured via microscope. Oxygen production or consumption was measured to determine respiration and photosynthesis rates. Conducting their testing in outdoor mesocosms, U. of Exeter scientists found that those warmed by 4 degrees produced phytoplankton populations with 70 percent more species and higher photosynthesis rates than populations from cooler mesocosms, making phytoplankton even better at removing carbon dioxide than before.