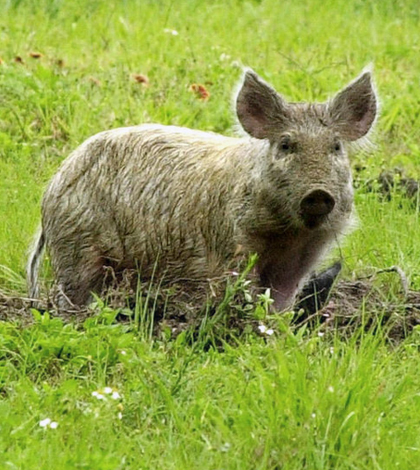 Feral hogs are an invasive pest across the U.S., including these photographed in Florida. (Credit: NASA)

Land managers in Louisiana trying to control invasive wild pigs now have a little more information on their side, thanks to a GPS collar tracking study that shows how far the hogs range in Louisiana marshes.

Wild pigs are among the most invasive animals in the United States. The hogs destroy crops, spread disease and reproduce at a rate that can outpace any eradication effort, and their populations are increasing.

“It’s a daunting task to keep up with, just trying to keep the population down,” said Steve Hartley, the author of the study and a geographer with the U.S. Geological Survey’s National Wetlands Research Center in Lafayette, Louisiana. “The problem has been here for a while and it’s only getting worse.”

Knowledge of how far the pigs travel is useful for managers looking to track down the animals responsible for recent damage. Other studies have shown the size of home ranges for pigs in Texas and Oklahoma, but those populations have to travel farther to their food and water sources. Louisiana marshes are a different environment, where the wild pigs are living right on top of their resources. “They’re eating roots and grasses and tearing up the marsh,” Hartley said. “And of course they don’t have to go anywhere to drink water — it’s right underneath their feet.”

The smaller home ranges were confirmed and quantified in a study that tracked 21 feral hogs through GPS collars. Though most of Hartley’s work revolved around the GIS analysis, he did help with the capturing and collaring of hogs.

The collars recorded each pig’s whereabouts and ambient air temperature every hour over the course of three years. The data showed that male pigs in Louisiana marsh habitats had home ranges of around 900 hectares. That’s much smaller than the 4,100- and 2,900-hectare ranges found for wild pigs in Texas and Oklahoma, and it tells managers who find hog damage that the pigs that did it are likely close by. The study also tested the “Judas pig” method of tracking, in which a feral hog is captured, collared and tracked in hopes that it will lead crews back to a group of hogs, called a sounder. The researchers tracked one pig for day, and it led them to 24 others, suggesting the Judas pig approach could be a useful management tool.

The Louisiana Department of Wildlife and Fisheries estimates that there around 500,000 wild pigs in the state. Licensed hunters are allowed to shoot the pigs year-round and reported killing 161,000 hogs in the 2012-2013 hunting season. That may sound like a lot, but researchers have estimated that feral hogs can recover from having 70 percent of the population removed with just 2.5 years. Female pigs can start reproducing before their first birthday, and can have two litters of up to 10 piglets a year.

When those piglets grow up, they contribute to an estimated $1.5 billion in damage and control costs across the country. Much of the damages are to crops, but Hartley said he think’s more research is needed that looks at ecological damages from the wild pig population. It’s relatively easy to attach a dollar amount to crop losses, but the value of natural landscapes is less clear, Hartley said.

Top image: Feral hogs are an invasive pest across the U.S., including these photographed in Florida. (Credit: NASA)