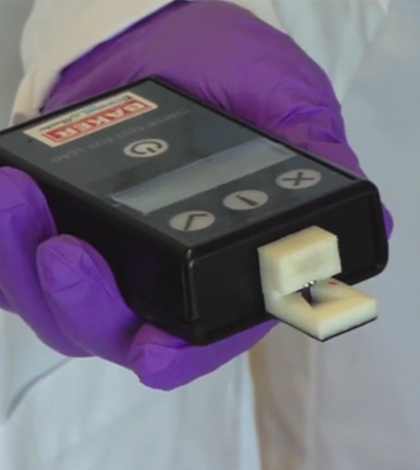 This graphene-based sensing device works like a handheld "canary in a coal mine," detecting even tiny amounts of contaminants in drinking water. (Courtesy of National Science Foundation's Science Nation)

As the dust continues to settle in Flint, Michigan, a town stricken with a human-made public health crisis in the form of poor water quality, researchers around the country are working to find new ways to test water. Right now, most monitoring for water quality takes place at water treatment plants or water supply intake points — not at points of use or along lines of distribution, where the quality matters most.

University of Wisconsin-Milwaukee distinguished professor of mechanical engineering, materials science and engineering Junhong Chen wanted to take this issue on using nanotechnology. The trouble with monitoring water quality at treatment plants and intakes rather than where it’s being used is that a surprising number of negative changes can take place in the water in the time (and distance) it takes to travel from treatment center to the homes and businesses of the people who use it. Toxic heavy metal ions, for example, can occur in the water.

Nanomaterials were an intuitive choice for this problem, because of their novel shape- and size-dependent properties which allow them to function as faster and more efficient adsorbents in water treatment. To avoid lead in the water as we’ve seen in Flint, and other, related safety issues, officials need detection technologies that are accessible and accurate. The new graphene-based sensing platform detects bacteria, heavy metals, nitrates and phosphates in real time. In other words, this breakthrough technology enables real-time detection, without sample preparation, of potentially deadly contaminants — and it makes that possible outside a central laboratory facility with unprecedented specificity and sensitivity. It works well for both single point, handheld testing and in-line continuous flow testing, so it can be used as part of larger protocols that already exist. Most importantly, it will allow field testing that’s immediate.

“The rapid response from our sensor could enable real-time detection that is needed for early warning,” Dr. Chen explains. “For example, more rapid sensing could lead to more time for responding to a potential contamination catastrophe.”

This is just one of many applications for graphene, thought of by many as a sort of wonder material. Graphene itself is merely a configuration of carbon atoms, arranged in a single layer to form a two-dimensional honeycomb lattice. In this unique form, the atoms exhibit electrical properties, and function as a zero-gap semiconductor that make it ideal for use in sensitive, high-speed biological and chemical sensors.

The device situates semiconducting graphene-based nanosheets between an electrode gap. The graphene’s conductivity changes as substances called analytes bind to its surface. This in turn allows the sensor to identify and measure the chemical constituents of these analytes. The surface of the graphene can be functionalized to target specific analytes as well.

“The technology is a platform technology,” Dr. Chen said. “So the device can be engineered to detect specific molecules by selecting a specific probe to attach to the sensor surface. Therefore, the device needs to be customized.”

This feature also eliminates the issue of confused results — something that is frequently a problem in water testing since so many different contaminants can be present in a single sample.

Dr. Chen continued, “We are addressing this issue by selecting a specific probe that prefers binding with the target contaminant in the presence of other interfering contaminants.”

Launching and Growing the Technology As America’s infrastructure ages, monitoring water quality in real-time at the point of use is more important. (Courtesy of National Science Foundation’s Science Nation)

Chen revealed the device and the research publicly for the first time on October 31, 2017, during the American Vacuum Society’s (AVS’s) 64th International Symposium and Exhibition, in Tampa, Florida. For Chen and the team, the device can fill an important gap in existing technology, because it provides low-cost, real-time monitoring of drinking water in the palm of the hand. While there is a worldwide need for potable water that is only growing — especially as disasters caused by extreme weather events such as the recent hurricanes in the Caribbean and the Gulf states which knocked out critical infrastructure — the need is rising.

In fact, only about 0.007 percent of the world’s water is available for human use. Chen and the team hope that real-time monitoring can not only improve water quality all over the world, but provide an early warning system to stave off dangers arising from biological and chemical contaminants in water. The team believes that with further engineering, the device should be able to detect analytes for beverages and food, and may also have biomedical applications.

“The sensing platform could also be used to detect various biomarkers relevant to disease diagnosis,” Dr. Chen remarks. “For example, we have showed that the platform can be engineered to detect E. coli bacteria and Ebola virus.”

Chen’s recently launched startup, NanoAffix Science LLC, will now work to commercialize this water-quality testing technology. The group has already taken the device from design to prototype, and plans to transform the prototype into a commercial product soon.

“Low-cost is a key to enable widespread applications of these sensing technologies,” Dr. Chen states. Someday this device or one similar to it might be in use in Flint, and towns like it, preventing disasters from happening in the first place.

Top image: This graphene-based sensing device works like a handheld “canary in a coal mine,” detecting even tiny amounts of contaminants in drinking water. (Courtesy of National Science Foundation’s Science Nation)