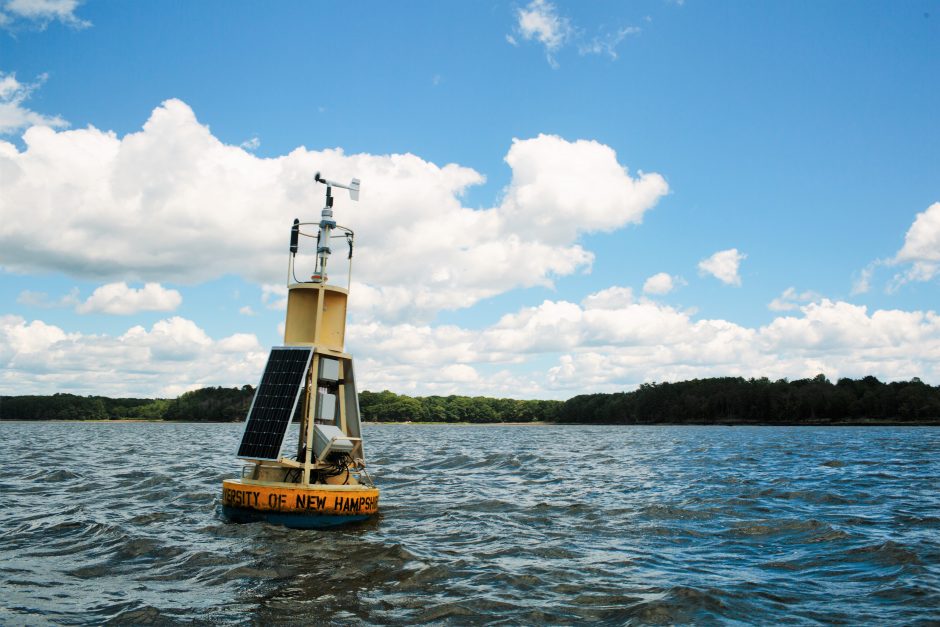 Great Bay National Estuarine Research Reserve stands apart from other NERRs in a couple ways: the Bay is 15 miles inland, unlike most NERRs, which sit on coasts, and it also has some of the world’s highest tides, with an 8-12 foot tidal expression along the coast and 6-8 feet expression in the Bay. “That’s a huge flux,” says Steve Miller, coastal training program coordinator for Great Bay.

Great Bay also has two high and two low tides per day, and at low tide, it’s 50 percent mud flat. “Great Bay has been protected from a lot of development because it’s so far inland and has such a strong tidal expression,” says Miller. “From most of the Bay’s shore you’d have to have a dock hundreds of yards long to keep your boat in the water, which would be very expensive and a little inconvenient.” For this reason, the Great Bay has been spared the heavy development of much of the Atlantic coast.

Great Bay also enjoys relatively good water cleanliness. “The Bay is actually much better than it was 100 years ago,” Miller explains. “Even though populations have increased in the surrounding areas, overall waste management has become better over time, and that has led to better Bay conditions compared to 100 years ago. However, currently stormwater, wastewater and nitrogen loads are a concern.”

Seven rivers flow into Great Bay, covering an area of about 1,000 square miles. The proximity of rivers and large forests made it a favorite of loggers 100 years ago, who wasted no time cutting down enormous swaths of timber for homes and furniture. They also used river clay to make bricks. All the waste from timber cutting, brick making and other activities flowed straight into the Bay.

“That killed the Bay,” says Miller. To this day, there is still a layer of sawdust sediment in Great Bay from the logging 100 years ago. It would still be dead, were it not for the Clean Water Act of 1972, the first time better management practices were seriously implemented. “Sawdust is used for pressboard now, and for wood pellets that are used for heat. Sawdust gets recycled now instead of just getting discarded into rivers. That’s one big improvement that has helped clean up Great Bay,” Miller explains.

There are many pieces in place now that help Great Bay NERR. Environmental monitoring is a big part of tracking the Bay’s progress. As with other NERRs, there is a System Wide Monitoring Program (SWMP), which utilizes protocols for monitoring weather, water quality and some habitat conditions. Tom Gregory, project director at the University of New Hampshire (UNH), oversees SWMP and other monitoring programs in Great Bay. Gregory explains that, “Monitoring in the Great Bay is done through a patchwork of organizations, with the UNH playing a large part.”

Great Bay’s SWMP data gathering efforts include use of YSI EXO2 data sondes. There are four stations, one in the middle of the Bay, three others situated in major tributary rivers to the Bay. The weather monitoring is performed at a weather station in a field near the western lobe of Great Bay using a Campbell Scientific CR-1000 data logger. A R. M. Young instrument is used to gather wind speed and direction data, while Vaisala probe is used for barometric pressure and a Rotronic sensor measures temperature and relative humidity. An Apogee quantum sensor collects Photosynthetically Available Radiation (PAR) data while a Texas Electronics rain gauge measures rain and snowfall. Data at water quality and weather stations are collected using telemetry and are broadcasted with satellite, cellular and radio systems. Telemetry systems in use include NexSens iSIC units (cellular) and Sutron units (satellite).  Like other NERRs, Great Bay uses the University of South Carolina as its data headquarters, situated in the Central Data Management Office. In terms of water sampling instrumentation, Gregory says there are still some YSI 6600 sondes out in the Bay gathering data, but the fleet has been transitioning to the newer YSI EXO2 sondes. Information gathered includes: water depth, conductivity, temperature, salinity, pH, dissolved oxygen and turbidity.

From mid-April to December, the four SWMP water stations are sampled monthly at low tide. They measure nitrate, nitrite, ammonium, orthophosphate, dissolved organic carbon and nitrogen, particulate organic carbon and nitrogen, total suspended solids, and chlorophyll-a. In addition to monthly grab samples, one of the four stations also gets a suite of 13 samples collected over one lunar day of about 26 hours. A Sigma autosampler is used for this effort. “We hang ours off a wharf near the head of tide in the Lamprey River,” says Gregory. Monthly grab samples are collected by hand at approximately 0.5 m below the surface while the autosampler collects samples about 1 m above the river bottom. “Once a sampling station is picked, we stick with it for at least two years,” Gregory says.

The Great Bay sampling effort personnel consists of Gregory, one full-time technician, two UNH undergraduates and a field support specialist who can drive a boat and SCUBA dive with Gregory. The UNH students are partially funded by a federal work study program. In addition to significant support from NOAA for SWMP work, the Gregory Lab also gets support from the Environmental Protection Agency’s National Estuary Program, through the Piscataqua Region Estuaries Partnership (PREP) as Great Bay’s Piscataqua River is part of the program. PREP funds Gregory to monitor more parameters than basic SWMP and do more studies. The government-funded New Hampshire Department of Environmental Services also provides funding to buy instruments. In 2017, funding made purchase possible of several new EXO2 instruments and total algae and fDOM probes. Total algae probes measure chlorophyll-a and blue-green algae while fDOM probes quantify fluorometric dissolved organic matter (how yellow is the water, i.e. tannins).

The Great Bay region is also part of the Integrated Ocean Observing System (IOOS), an organization covering U.S. waters that provides high quality data from a relatively small local lake scale all the way up to a large global ocean basin scale. The data is collected continuously. The Northeastern Regional Association of Coastal Observing Systems (NERACOOS), part of IOOS, has also funded a buoy in the middle of Great Bay since 2005. AXYS Technologies of Canada produces the Watchman 500 which is the “brains” of the buoy, as it controls data logging, sensor scheduling and radio telemetry. The buoy provides in situ nitrate data via a Satlantic SUNA sensor, along with phosphate and ammonium data using WetLabs hydrocycle instruments. The Buoy also uses a YSI EXO2, which has a full complement of probes including all the typical SWMP probes plus total algae and fDOM. They also use Satlantic OCR underwater and above water radiometers, which collect hyperspectral light data.

Gregory and his colleagues have also started a new initiative to measure ocean acidification using a Sunburst SAMI sensor that measures pCO2 in a SAMI instrument. They also have been employing a Satlantic SeaFET, a highly accurate pH sensor. Tom Gregory with the Niskin bottle at the desired depth, Gregory releases the messenger that will close the bottle. (Credit: Emily Lord)

All of these data give Great Bay NERR researchers a constant pulse of the Bay. While, as Miller noted, the Bay has improved a lot since heavy logging activities caused the Bay to be used as a dumping ground a hundred years ago, challenges for the Bay still remain. More building in the area has led to an increase in impervious surfaces like rooftops and driveways around the Bay, which increases surface water runoff and flooding. Miller says they are losing some ground due to these issues. Oyster and clam numbers have also been down.

“I’d love to see healthy alewives runs, healthy bird populations, increase in clams and get oysters back in greater numbers,” says Miller. “We have had a restoration of ospreys lately, which is great.”

“All of those increases improve human quality of life,” Miller explains.

With Miller, Gregory, other highly motivated and experienced staff and students, and the latest in environmental monitoring technology, it seems likely visitors will be watching Great Bay become even greater for years to come.