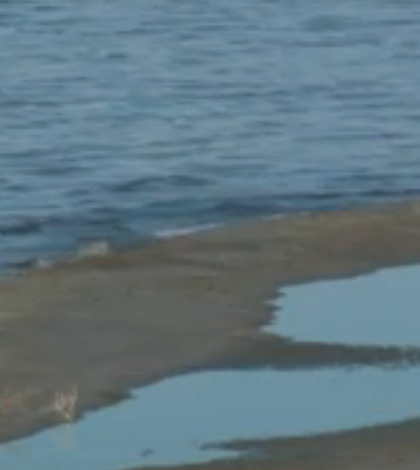 Great Salt Lake has hit its lowest levels since the 1960s. (Still from a video by Fox 13 TV in Salt Lake City)

The north arm of Great Salt Lake is seeing record-low water levels, according to Fox 13 TV in Salt Lake City. Hydrologists studying the declines say that the levels haven’t been this low since the 1960s.

At most fault, scientists say, are low levels of snowpack in mountains surrounding Great Salt Lake. If the low snowpack continues to be a problem, it is very likely that the receding waters seen at the lake’s north arm will make their way to the south arm. The first murmurings of such a development may already be occurring, since water has stopped flowing through the causeway separating the two halves of the lake.

Dropping water levels have outsized effects on Great Salt Lake, hydrologists say, because of the lake’s shallow and flat-bottom basin. This means that there is a seemingly more dramatic effect at the shore, exposing broader stretches than would be at other lakes, with every drop in overall levels.

Lower levels at Great Salt Lake affect everything from wildlife and tourism to air quality in the surrounding areas.

Top image: Great Salt Lake has hit its lowest levels since the 1960s. (Still from a video by Fox 13 TV in Salt Lake City)