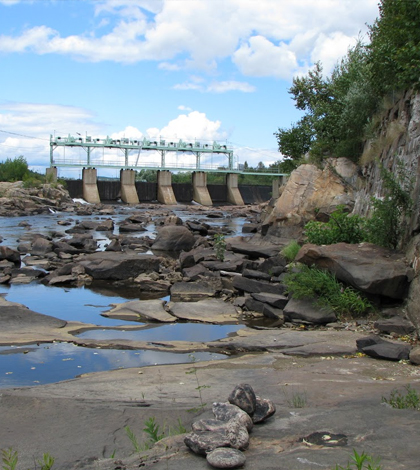 The Chor-Alkali Facility manufactured chlorine for use in paper production from 1898 until its closure in the 1960s. The EPA declared it a Superfund site in 2005. (Courtesy Celia Y. Chen)

The green, slimy algae commonly found coating streambeds may threaten more than unsteady waders. New research from Dartmouth College and the U.S. Environmental Protection Agency reveals that communities of algae and bacteria known as periphyton are transforming the inorganic metal into its more toxic, organic form.

Nine years after demolition began on a controversial wall in a city called Berlin, another wall went up in a town by the same name — this one halfway across the world. The wall in Berlin, New Hampshire wasn’t built to prevent emigration, but to reduce contamination from a long-defunct chemical plant at a paper mill.

The Chor-Alkali Facility was responsible for manufacturing chlorine used in paper production. In 2005, the U.S. EPA added the vacant property to its Superfund list, marking it for cleanup due to the mercury, lead and arsenic concentrations found in local groundwater in spite of the slurry wall and other installations meant to contain that contamination. It wasn’t until 2009, however, that the EPA began a full investigation of the site on the banks of the Androscoggin River.

As part of that investigation, a Dartmouth College team led by research professor Celia Chen worked closely with the U.S. Geological Survey to examine mercury uptake by riverine organisms. They hypothesized that periphyton was converting mercury into methylmercury, an organic form of the metal that bioaccumulates with greater potency than its inorganic form. Mercury normally methylates in anaerobic sediment — an absent factor in the fast-moving waters near the Superfund site — but the presence of periphyton makes the process possible in a greater range of environments. Chen and her team operated across five sites upstream and downstream of the abandoned facility, collecting samples from the sediment, the water column and the creatures that populate it.

“We have to do that in lots of different ways,” Chen said. “We use kayaks, we wade out with seines to catch fish, we literally are on the shoreline looking for some of the aquatic invertebrates like snails and mayflies and crayfish.”

The Dartmouth researchers also gathered samples of periphyton, scraping the ubiquitous organic matter off rocks on the riverbed.

Chen described the work as “kind of meticulous,” saying that the utmost attention was paid to cleanliness when gathering and storing the samples. Rubber gloves and acid washes ensured that any mercury found in a sample was there at the time of sampling, and not carried over from other sources.

While the research from the USGS and Dartmouth found that mercury levels were highest in the sediment and water closest to the site, Chen said she was surprised to find relatively low mercury in most of the biota near the site. However, the periphyton and mayflies showed the highest concentrations, while sampled crayfish and fish contained little of the metal. Small fish living near the site seemed to contain no mercury at all. Downstream, the researchers observed elevated levels of methylmercury in both fish and periphyton, though Chen acknowledges that, without further study, there’s no telling if the mercury came from the Chor-Alkali Facility or another source in the watershed. The EPA’s side of the research looked beyond the banks of the river to determine the scope of the mercury contamination. Their sampling targeted a wider range of subjects, from soil, insects and worms to bats, swallows and bald eagles, and revealed results similar to those uncovered by the Dartmouth and USGS teams.

The EPA was concerned that the worst impacts would be downstream from the site where the water flows more slowly, according to agency researcher Darryl Luce. However, the EPA determined that neither the birds nor bats sampled downstream face an ecological risk. Additionally, Luce said that the site poses little risk to humans as long as they avoid direct contact with the waste and don’t eat fish caught downstream from the site.

The EPA is negotiating with “a potentially responsible party” to stem the flow of contaminants from the site. Luce said he’s hopeful that the EPA will be able to address some of the most affected areas by later this summer.

Chen and the Dartmouth team aim to investigate the contamination further downstream, possibly venturing into Maine. They’ll have to continue working with the EPA and other agencies to secure the resources necessary for continuing the research.

“The Superfund Research Program, part of the National Institute of Environmental Health Sciences, is really the reason that we’re able to do this kind of work,” Chen said. “That’s really important in terms of how we determine whether the way we’ve contaminated the environment is actually getting to other places besides where the contamination started.”

Top image: The Chor-Alkali Facility manufactured chlorine for use in paper production from 1898 until its closure in the 1960s. The EPA declared it a Superfund site in 2005. (Courtesy Celia Y. Chen)