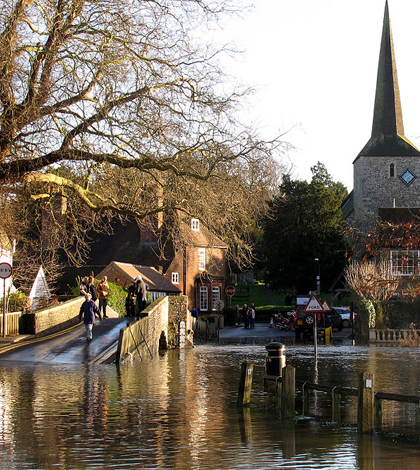 The River Darent during the 2013 flood. (Credit: Stephen Craven via Creative Commons 2.0)

The 2013-2014 winter was unusually severe in southern England, impacting areas such as Somerset, Dorset, Devon, Cornwall and the Thames Valley. Huge storms passed over, causing unusual flooding and several deaths. According to a release from Oxford University, human-emitted greenhouse gases were to blame for the increased storm severity, researchers found. The unusual weather conditions were also found to be related to a thermodynamic factor and a dynamic factor associated with global warming.

Scientists found that the increased rainfall was likely due to the enhanced ability of the atmosphere to hold water, a thermodynamic property, and more January days with westerly air flows, a dynamic property. The researchers looked at the severe storm events from beginning to end in a first-of-its-kind study which included atmospheric circulation effects, rainfall, river flow, inundation, and at-risk properties.

Modeling looked at potential weather for January 2014 with and without human influence. More than 100,000 simulations of possible rainfall for southern England were run by citizens all over the world to yield study results. Hydrological modeling of the Thames river catchment showed atmospheric circulation and precipitation conditions caused a peak in river flow.