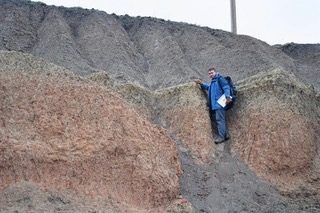 “In the paper, we estimated that a significant amount of CO2, 1.7 million metric tons per year, was likely being added to the atmosphere because groundwater has been tapped so much in recent years. A number of things went into our calculation. I had 40 years’ worth of groundwater data from my career at the United States Geological Survey (USGS). I also had a lifetime of experience with hydrogeology issues. I’m not sure why the idea occurred to me one morning, but with a back-of-an-envelope calculation, in a couple of hours I had a draft of the paper,” says Wood.

As drought conditions have persisted in much of the American West, groundwater is getting scarcer and scarcer. “I especially think of the Ogallala Aquifer,” Wood says. “It’s the biggest aquifer in America. It goes northward from western Texas to South Dakota and supplies a third of the U.S. And it’s disappearing rapidly.”

More groundwater is being pumped out of the aquifer, and thousands of other aquifers, more quickly than it is being replenished by rainfall. The groundwater has 10 to 100 times greater CO2 than surface water due to its subterranean interactions with soil, minerals and bacteria. Though the groundwater would normally store this CO2 for hundreds or thousands of years, when the water is pumped to the surface, the CO2 is released into the atmosphere.

In his back-of-the-envelope calculation, Wood considered the chemical equations that contributed to the amount of CO2 in the water. There was variation depending on where the groundwater came from, as sedimentary, igneous and other rock types resulted in different levels of bicarbonate and CO2 molecules in their chemical interactions with the groundwater. Wood used an extensive study of aquifers in the U.S., published by Konikow in 2013, which found that in the past 108 years, the total amount of depleted groundwater was estimated to be about 1000 cubic kilometers. A study published by Desimone in 2009 gave a median bicarbonate concentration of U.S. aquifer samples to be about 190 mg/L. The Desimone estimation was based on 2003 water samples from eight types of aquifers in 30 aquifer study units of the U.S. Geological Survey, National Water Quality Assessment. Wood estimated that about half the groundwater bicarbonate (95 mg/L) is converted to CO2, a mass equivalent to 68 million metric tons of CO2 that would occur for 1000 cubic kilometers of depletion. Annually, the U.S. depletion would be about 25 cubic kilometers, giving a CO2 contribution per year of approximately 1.7 million metric tons. Wood and Hyndman were the first to estimate the actual amount of CO2 contributed per year. “It’s not remotely as much as the contribution of CO2 from industry,” says Wood. “But it’s a factor.”

Wood believes that the CO2 contribution from groundwater depletion is not our only cause for concern. “In the 1950s and 1960s, we were always obsessed with finding water. Currently, we are worried about contaminating what we have. We developed the ability to extract groundwater efficiently in the 1920s, and we’ve been pumping it out of the ground ever since. We need to think about economics, societal aspects and local sensitivities with regards to water use. With increasing population needs and local use variations, we need to be good stewards of our aquifers, or we will be in big trouble. People ask me if we could run out of groundwater. Could we run out? It’s unlikely, but yes, it is possible.”