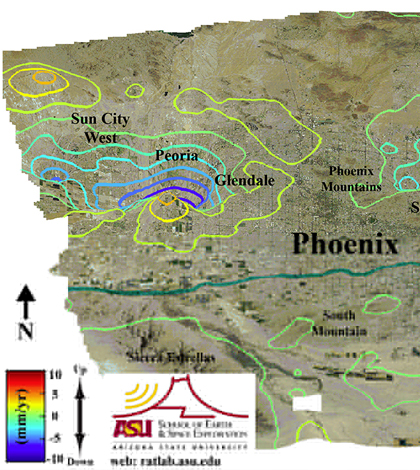 Using synthetic aperture radar capable of measuring surface levels to less than an inch, two scientists from Arizona State University have found that parts of the Phoenix metro area are sinking, according to a release from the school. They believe groundwater pumping is to blame for the drops.

Radar measurements over time have helped the researchers uncover ground sinking at the tune of around 1 inch per year in the eastern part of the city. To its northwest are other centers of sinking land that are dropping a little more slowly, they say.

Scientists note that sedimentary basins of the Phoenix metro area vary in terms of their thickness, as well as other properties. The differences, in part, help to explain why some areas are sinking more than others. Still, researchers say the biggest cause of changing surface levels is groundwater lost from the aquifers below.