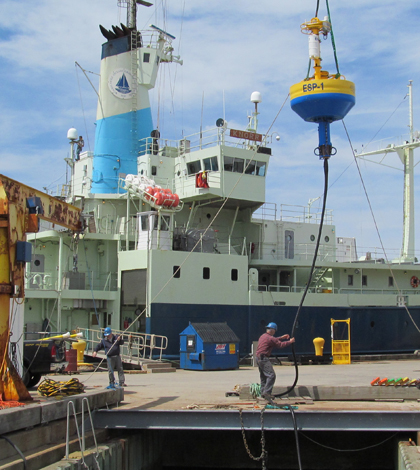 Cutting-edge, cell-detecting sensors in the Gulf of Maine are helping scientists and managers better navigate and predict an annual bloom of toxic algae that perennially threatens the state’s multi-million-dollar shellfish industry.

Since 2011, scientists with the Woods Hole Oceanographic Institution, or WHOI, have worked to develop a regional array of Environmental Sample Processors, robotic instruments that draw water samples and analyze them for the DNA of particular species.

In this case, the so-called ESP instruments (originally developed at the Monterey Bay Aquarium Research Institute) are on the lookout for Alexandrium fundyense. Blooms of the red tide alga produce a toxin that causes the sometimes fatal human illness called paralytic shellfish poisoning that occasionally closes large expanses of the coast to shellfishing.

For the first time, four ESPs will be deployed in the Gulf of Maine this season, with three already in the water and the fourth to come later in the season. Two of the instruments will be equipped with the experimental capacity to detect not just Alexandrium cells but also the toxin they produce.

“The detection of the cells by the ESPs has been accomplished for several years now, so that part of the instrument’s operations is pretty solid,” said Don Anderson, a senior scientist at WHOI. “The detection of the toxin is a brand new capability and its still one that we’re working on with colleagues from NOAA.” A WHOI ESP and buoy on the deck and ready for deployment (Credit: Woods Hole Oceanographic Institution)

The data from the offshore instruments will provide fisheries managers with an early warning of bloom development, which helps guide the shellfish sampling that determines bed closures. Additionally, the instruments could help improve seasonal and weekly forecasts of the bloom’s severity based on a computer model developed at WHOI and North Carolina State University.

The forecasts are based on annual surveys of the Gulf’s sediments for the distribution of cysts from which the Alexandrium cells germinate each year. The model uses each year’s cyst map and archived computer simulations of past oceanographic and meteorological conditions to determine growth and distribution of the resulting Alexandrium cells. This yields an “ensemble” forecast of a range of potential bloom scenarios.

Scientists begin running the model in February and get forecasts out by April to more than 150 fisheries and resources managers. The problem with that schedule, Anderson said, is that there hasn’t been data available to correct the forecast if the bloom’s actual development doesn’t match up with the model’s predictions. That was the case in 2010 and 2013, when the model forecast substantial Alexandrium blooms that never materialized. That may have been the result of an abundance of rain to the north in Nova Scotia, or even melting of ice and glaciers in the Arctic that sent fresher, warmer water into the Gulf and stymied development of Alexandrium, which emerges from its cysts around the same time every year whether conditions are right or not.

“If you have big changes in the surface waters, the organism can be out of sync with the environment,” Anderson said. “It germinated like it always has, but it then swam up to the surface waters that were not supportive for growth.”

An array of ESPs in will help scientists create a real-time picture of the field of Alexandrium cells in the Gulf as the bloom season wears on. The plan is to combine the data on cell abundance with data on the movement and chemical and physical properties of water in the gulf obtained from NERACOOS, a regional network of buoys that measure currents, salinity, temperature and meteorological parameters across the Gulf and Long Island Sound. By integrating information on cells and water quality and movements collected during the bloom season, the scientists hope to continuously validate and update the forecasts produced by the model.

The idea is similar to modeled weather forecasts that, as conditions change, are verified and improved by hundreds of meteorological stations across the landscape.

“That’s called data assimilation and that’s what we need to do in the ocean,” Anderson said. “The ESPs are the oceanic version of the weather stations on land. Then we can say, ‘Wow, the model says there should be large numbers of cells out here. There are none. What’s wrong? We then have to adjust and run the model again.'”