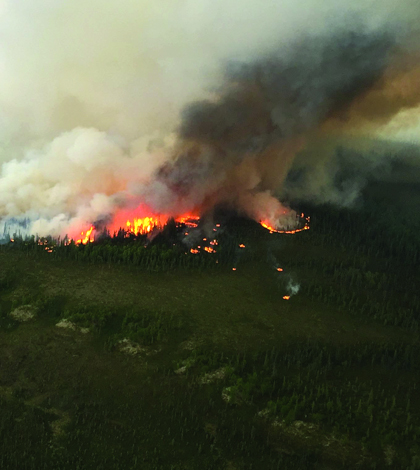 Climate change appears to be raising fire risk in the Arctic tundra, as a recent uptick in blazes have scorched permafrost there. And the impacts of the burning on permafrost are not yet fully understood.

Many scientists are interested in learning more about the effects, among them those at Woods Hole Research Center who are embarking on an expedition to the region in mid-September. Armed with handheld water quality meters, peristaltic pumps and other tech, they’re in for a whirlwind of sampling to log conditions in 25 different aquatic bodies in the Yukon River Delta over the course of just three days.

Their main interest lies in determining how the water bodies have changed following 2015’s Kuka River Fire. The blaze came after a warmer winter meant less snow for the area. The precipitation dried up quickly and a thunderstrike is believed to have sparked the fire.

“Last summer was a crazy fire year for the area,” said Max Holmes, senior scientist at Woods Hole. He has a lot of experience in tundra regions, having worked in parts of Siberia and participated in many investigations to aid the Arctic Great Rivers Observatory. “More area burned last year in the Yukon River Delta than in the last 67 years.”

Early in June 2016, he and others visited the delta to study the active layer of permafrost there. Essentially, that layer is the portion of the frost that fluctuates each year between thawing and freezing.

During the time out in the field, Holmes and around eight other colleagues camped out to study the active layer’s fluctuations. It was a remarkable place to sample following the fire. “One thing about the fire that was interesting, it was just so patchy,” said Holmes. “The lower-lying areas of the tundra was like a patchwork of burned to unburned areas. That helped us compare the areas easily.”

Along the way, Holmes and others made a key find about the Kuka River Fire’s impacts.

“In the active layer, the permafrost thaws each year. But it was considerably deeper in areas that burned,” said Holmes, cautioning that findings are preliminary and that more analysis of the expedition’s samples is yet to be done. “And there was a big pH difference. The aquatic bodies in burned areas have higher pH levels, which was an interesting result.”

The September trip looks to build on those insights by measuring a slew of terrestrial and aquatic conditions. Scientists have an eye toward gauging changes in the Yukon River Delta’s permafrost as well as the gases that its thaw may be helping to release.

Fluctuations of methane and carbon dioxide over the tundra are going to be tracked. And parameters like pH, temperature, conductivity and dissolved oxygen will be gauged with YSI ProDSS handheld water quality meters in each of the 25 bodies of water under study.

“It’s an ambitious trip. Three people for three days, in a helicopter each day, going from site to site. We’ll see how it goes,” said Holmes. “… But there’s a huge amount of carbon in the delta and we’re trying to find out the impacts on permafrost. That’s a big climate question.”

Results of the effort will be used in published scientific papers, he says, adding that Woods Hole’s Polaris Project will also benefit. The project, in some of its programming, engages around 12 undergraduate students to develop their own research and share it with the public at large. Polaris had for some time been focused on work in Siberia but is shifting efforts to the Yukon River Delta starting in 2017.

Funding for all of the projects is being provided by the National Science Foundation.