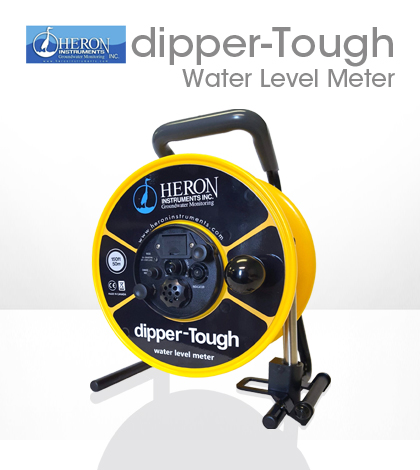 For all the straightforward groundwater monitoring applications that the folks at Heron Instruments help with, there are a few that are far from typical. These include projects that take place near remediation sites or not far from waste disposal operations. Realizing that customers working in those sorts of projects are in need of a more robust option, the company has released the dipper-Tough.

The new water level meter takes inspiration from Heron’s popular dipper-T, while throwing in a host of improvements that environmental pros working in groundwater can really appreciate. The useful drawDown feature automatically deploys the IP68-rated probe and tape, which is toughened with hydrocarbon-resistant Kynar and a seamless connection with the probe, while other features such as accessories and warranty terms make the meter a more excellent choice.

The dipper-Tough comes with the standard static sampling mode, but drawDown provides a lot of convenience to users. Instead of bringing the tape up and down the well to measure where the water level is during pump testing, users can lower the probe into the water at a desired depth and push the mode change button to put the meter into drawDown mode. Start pumping out the water and, once the water goes past the probe, the unit will sound in air. This will signal users to turn the pump off.

With the meter’s third hand, basically an extra stand permitting it to be mounted on top of well casings, groundwater pros can streamline fieldwork even further.

But what pros working in harsh environments really need is a tougher connection between the tape and probe. Since they sample frequently and in harsh fluids, there has been an increased possibility that the two would become separated.

“We have some clients in remediation who ruin their tapes and probes a lot. We worked with them and designed the dipper-Tough with a standard water probe and no link,” said Terri Kernaghan, marketing manager at Heron. “There is no link area, so high turnover or harsh environments don’t affect that.”

Another important feature to note for the high-tensile steel tape is its Kynar jacket. The coating is resistant to harsh liquids and provides another layer of ruggedness to extend the usefulness of the dipper-Tough water level meter. Kernaghan says it can even withstand temperatures up to 110 degrees Celsius.

The meter is warrantied for 3 years. Its tape and probe, already substantially upgraded to provide solid performance in harsh applications, are not warrantied because of the environments they get used in.

A lot of the dipper-Tough meter’s other notable features can also be found on the dipper-T. These include a sensitivity dial, handguide and probe tester. Cables are available in either metric or imperial units, per user needs, and come in lengths of 15 to 150 meters (50 feet to 500 feet). The new meter also comes with a padded carrying case.

For the dipper-T, Heron’s well depth indicator probe is one popular accessory. It signals the meter to sound when the bottom of the well is reached. Another hot-seller is the well casing indicator probe that lets users measure how much steel casing is in a well. Both probes are only available on the dipper-T.