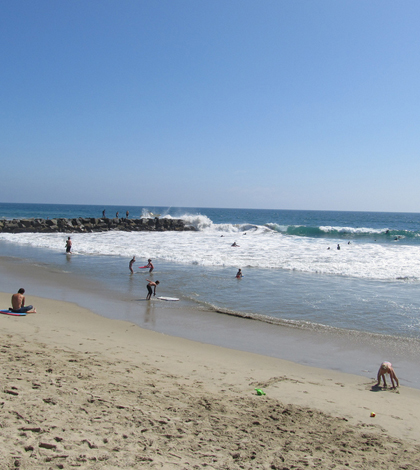 As if California’s drought hadn’t raised enough of a stink from the state’s parched residents, new research shows that the dry weather contributed to higher fecal counts at enclosed bay beaches.

“A lot of the time it’s enclosed beaches that get really bad report cards,” she said. “I was interested in evaluating why that might be.”

Although these shallow “baby beaches” are popular among parents of young waders, the pollution afflicting the bays has little to do with diaper effluence. In fact, it’s waste from birds, dogs and our very own vehicles that’s pouring from drainpipes into bays in a vile concoction known as “urban slobber.”

“One thing that we noticed is that the small drains that surround the perimeter of Newport Bay appear to trap and release runoff in dry weather,” Rippy said. “The drains are extended out into the bay and that’s done in such a way that in high tide they’re covered and in low tide they’re exposed.”

These drains connect to a stormwater system that carries excess rain water off city streets and into the bay. But that rain water transports contaminants as it flows from ground level through a system of underground pipes. Any fertilizer, motor oil or other crap both figurative and literal is washed from the streets, only to make its way to the beaches populated by splashing babes and anxious parents.

The UCI researchers dyed wastewater as it exited drains in the Upper and Lower Newport Bays, then studied how the plumes of pollution behaved. As the freshwater runoff is lighter than the saltwater it enters, it forms a film atop the water rather than dissipating. Exposed fully to the wind, the pollutants often ride a breeze back to shore. The Back Bay in Newport Beach, California. (Credit: D. Ramey Logan, via Wikimedia Commons/CC BY 3.0)

“They’re ‘green’ technologies that are designed to treat storm waters before they enter the storm drain system and are released to the environment,” she said.

Surprisingly, Rippy says another factor has influenced the reduction of contaminants in Newport Bay: the drought itself.

“People have been preserving water [due to the drought],” she said. “Less urban rot is entering the bay, and it appears that the bay is the cleanest it’s been.”

And when the drought (finally) lets up?

“If we want to keep improving water quality,” she said, “we’re going to have to keep preserving water.”