High Ozone Days In U.S. May Increase With Climate Change 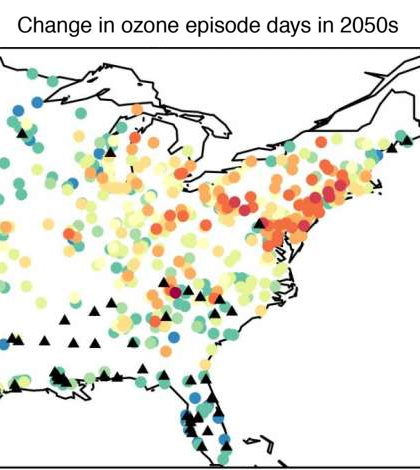 By 2050, there will be a three to nine day increase in ozone-episode days, according to scientists from Harvard University. The days are marked by high ozone levels.

Continuing climate change will result in an increase in summer heat waves, which in turn will cause a 70 to 100 percent increase in ozone episodes, researchers estimate. The severity of the effects will likely vary regionally.

To look at future ozone levels under conditions where global warming continues at its current rate, Harvard researchers teamed up with the National Center for Atmospheric Research to develop a model that uses the known relationship between ozone level and temperature.

While most of the U.S. will get around 2.3 more days of high ozone, some regions, such as the Southwest, the Northwest and California may receive a full nine days more.

In most cases, when surface temperature increases, so does ground level ozone. However, at temperatures in the mid-90s Fahrenheit, scientists saw that relationship broke down and less ozone was produced.