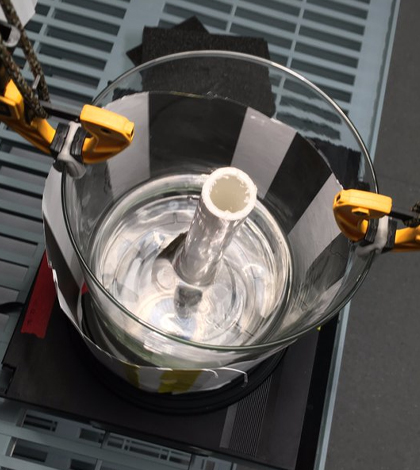 As any Lake Erie fisherman will tell you, walleyes are visual hunters. They like to pursue prey they can see. But in recent years, blooms of algae have clouded the waters walleyes hunt in and the effects of that aren’t yet fully understood.

At the forefront of dissecting impacts to the famous Lake Erie predator are researchers at Ohio State University. They are using a series of experiments to learn more about how walleyes and emerald shiners, common walleye prey, respond to varying levels of visibility.

“Both species rely on vision to find food and avoid predation and are also of high economic importance in Ohio,” said Suzanne Gray, assistant professor in the School of Environment and Natural Resources at the university.

Gray and her collaborators are using a number of behavioral experiments to test how well the two species of fish can see under different levels of turbidity. One of these is a reaction-distance study to determine how close a fish needs to be to its prey to detect it visually.

They do the test by seeing how the fish respond in clear water versus how they do under different conditions of water clarity, such as high turbidity from algae or sediments in the water.

“We expect that when the water is cloudy due to turbidity, the fish will need to be closer to its prey to detect than when in clear water,” said Gray.

Investigators are using another test called the optomotor response test to gauge the visual sensitivity of walleyes and shiners to increasing levels of turbidity. It makes smart use of a repurposed record player.

“Basically, the fish are in a round tank with a slowly spinning black and white screen around it,” said Gray. “As long as the fish can detect the screen they will follow it, but once the turbidity becomes too high and the light level too low, they stop following the screen.”

Throughout the test, the water’s cloudiness is measured using a turbidity meter. Additional water quality parameters are recorded with a YSI Pro Plus.

Looking at results from pilot studies, Gray says that both of the fish species are expected to have diminished visual abilities at higher turbidity levels, whether they’re from increased algae or sediments. But she also notes that the two types of turbidity can change the color and intensity of light underwater in different ways.

This past summer, Gray supervised an undergraduate student who ran the optomotor response test for emerald shiners.

“She found that these fish had a lower visual threshold under algal turbidity than under sedimentary turbidity – meaning that when there was a low level of algae in the water their vision was compromised but at the same level of muddy water they could still see,” said Gray. “This is really interesting and we’ll be doing further studies to try to understand why we found this result.”

A key component of the investigation looks to engage Lake Erie charter boat captains so that researchers can learn how the fishermen perceive the influence of harmful algal blooms on the fishery. One important question is how the boat captains have changed the way they fish because of the blooms.

“The charter captains rely on the walleye fishery, and so we have engaged them in this project so that we can transfer the new knowledge we find to them and they can help us to better understand the dynamics between recreational anglers, harmful algal blooms and the walleye fishery in Lake Erie,” said Gray. “… By next summer, we hope to have developed an app that will really push our citizen science project with the charter captains forward by helping us to collect water color and fishing success data in real time.”

The goal is to wrap up the entire project in early 2018, though Gray and others hope to keep the research going. But there should be some meaningful results to report at that point, as investigators combine all their data.

“… We hope we will be able to pull together our results from the vision experiments and from the citizen science project to be able to say something meaningful about the effects of turbidity on the walleye fishery,” said Gray.

Additional collaborators on the project include Jeremy Bruskotter, an associate professor of environment and natural resources at the university, and Eugene Braig, director of Ohio State’s Extension Aquatic Ecosystems program. Ohio Sea Grant is providing funding for the work.

Walleye and emerald shiners used in the investigation are trawled from Lake Erie using cast and seine nets.