How Green Was My Cyanobacteria: Carbon, Nitrogen, and Phosphorus Cycling in Lakes 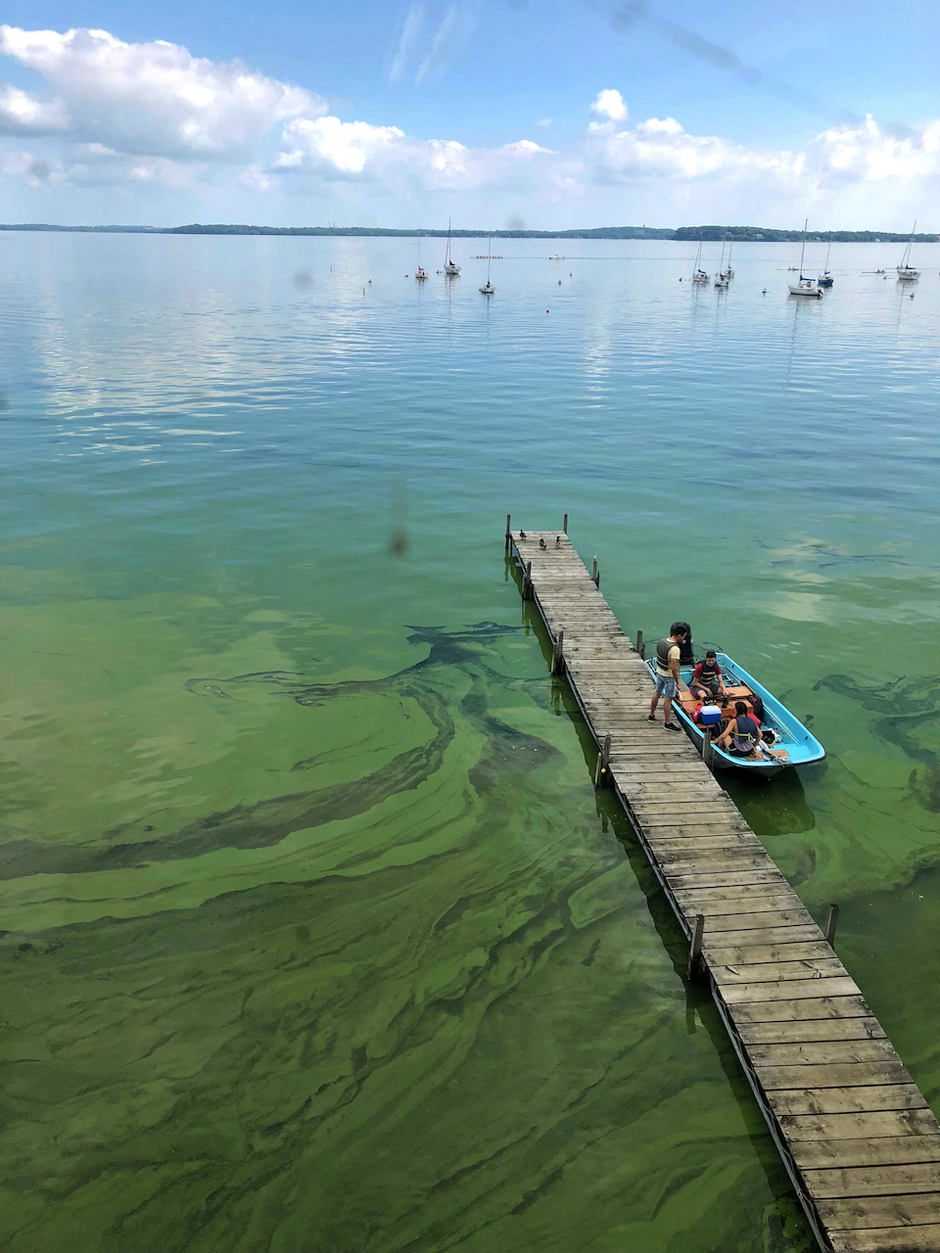 Lakes are subject to many forces ranging from the climate to the presence or lack of individual chemicals and their movements in the lake system. One of the many forces acting on lakes is bacterial action, which is a major player in phosphorus, nitrogen, and carbon cycling in lake systems. These, in turn, influence eutrophication and water quality in lakes.

Trina McMahon, professor of civil and environmental engineering at the University of Wisconsin-Madison, described how bacteria affect cycling of these three major chemical elements in lake systems, and how lake health is impacted. 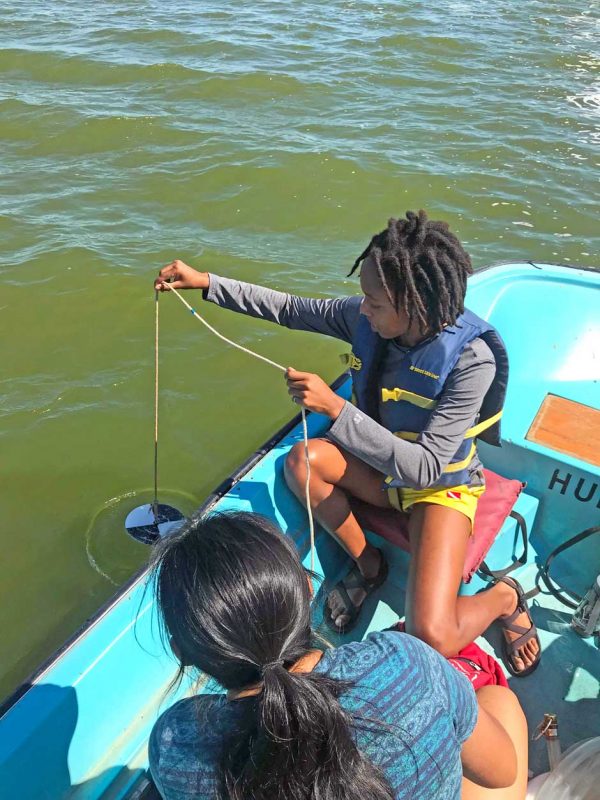 “All cells need carbon, nitrogen, and phosphorus for building DNA and to make cell structures. They are not toxic. Blue-green algae (cyanobacteria) consume them and perform photosynthesis. Insects, fish, frogs, and other animals eat the algae and use its nitrogen and phosphorus to make DNA and proteins. Then when these animals die, the carbon in them gets turned to CO2,” McMahon explained.

The phosphorus, nitrogen, and carbon cycles in lakes are not necessarily independent processes, but are largely related and integrated, said McMahon. “Nitrogen cycling is the most complex, and can sometimes be independent from the carbon and phosphorus cycles, but all three are interconnected inside organisms.”

Phosphorus, nitrogen, and carbon cycling processes in lakes relate to eutrophication and water quality in ways that are both natural and anthropogenic. Lakes tend to naturally get more enriched in phosphorus over time, the amount of carbon available in them for cycling is essentially unlimited, and blue-green algae can even take nitrogen from the air, said McMahon.

Since phosphorus can only come from land, it is the limiting reagent in the lake system. Human activities accelerate the eutrophication process by adding more phosphorus to the cycle, and also by adding nitrogen and phosphorus linkages. Phosphorus can come from agriculture and also from wastewater treatment.

Phosphorus cycling of the lakes can also be considered on an annual basis: seasonal events may cause nitrogen and phosphorus deficits compared to other times of the year. McMahon mentioned that flooding often causes a massive inflow of nutrients, but calm weather and warm temps can cause BGA blooms that would suck up nutrients, and thus, one or the other becomes limiting. 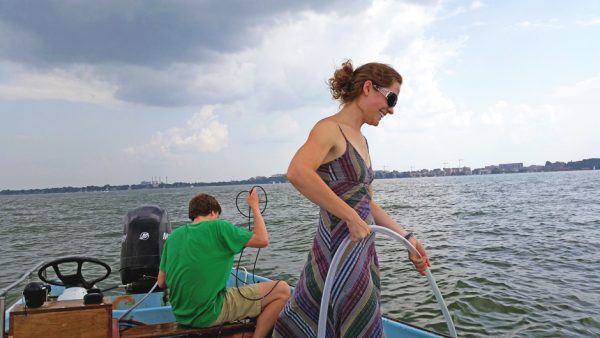 As far as which bacteria are driving phosphorus, nitrogen, and carbon cycling processes, McMahon said some are well understood, but many are not. Algae and cyanobacteria control a lot of the cycling. Some of the bacteria have been well studied. Fonsibacter, for example, is known to be making an impact on cycling and won’t easily grow outside of the lake.

Metagenomics data from the lakes is also employed to look at bacterial genomes and compare them to see if they are from distinct microorganisms.  But even then, many do not have specific identifications; it is just known whether they are similar or different microorganisms. Many have IDs no more specific than a string of letters and numbers. “You can see in their DNA what they do, what functions they are performing: like eating sugars, consuming phosphorus, etc., as the signatures are in their genomes,” McMahon explained.

Some of the blue-green algae/cyanobacteria involved in lake chemical cycling are Microcystis, Anabaena, Planktothrix, and Aphanizomenon. Of the algae, Chlorophyta is known to be important.

McMahon became interested in studying bacterial populations in lakes through her training in engineering and sewage treatment. “We use bacteria to clean water, but not algae or cyanobacteria,” she said. “Bacteria carry out the same functions in both wastewater and in lakes. However, we find that there is 10 to 100 times higher nitrogen, phosphorus, and carbon in wastewater than in a lake.” Nocardia and Zoogloea are typical bacteria in wastewater. Bacteria remove 99% of these chemical species. Accumulibacter, on the other hand, appears in both wastewater and in lakes. Accumulibacter makes polymers out of phosphates and stores them inside its cells.

Information collected in the lakes by McMahon and her colleagues included: concentration of nitrogen species (nitrates, nitrites, ammonia, urea), temperature, dissolved oxygen, and light measurements, as well as DNA data. 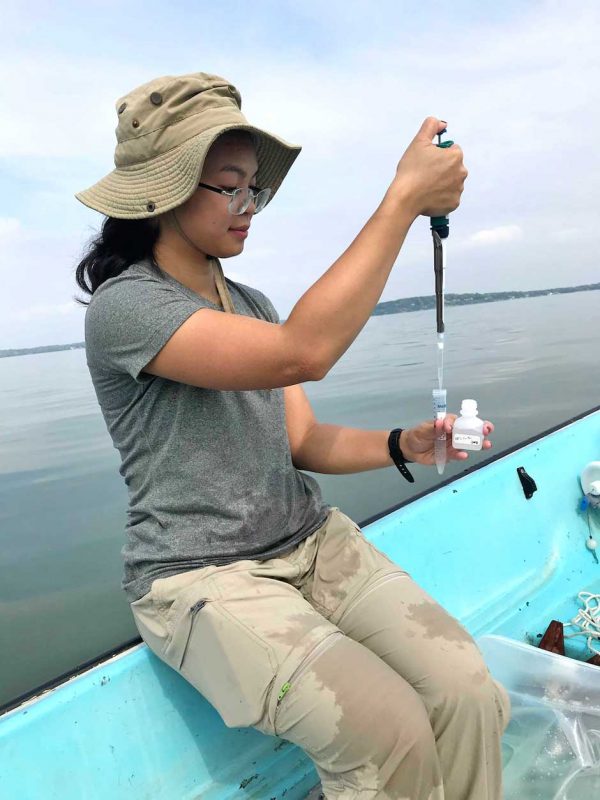 One of the questions McMahon has considered in her research is: what is a healthy lake? “We don’t have a good definition of that yet,” she says. “It depends on what you decide has value. Humans don’t like green water, so to us that is undesirable and clear water is preferred, but what we have seen in lakes with zebra mussels, for example, is that they filter the water and make it clear but that is actually not a good thing, since it destroys the food web and causes fish populations to collapse. Lake Michigan is very clear and clean now because of zebra mussels…but clean has been bad for the fish populations.”

While the question of what a healthy lake is can be subject to some debate, there are some activities people agree are beneficial to lake health. McMahon suggested that keeping zebra mussels out of lakes that don’t have them yet is helpful. Washing boats off between uses and keeping septic tanks from being drained in lakes are good practices, too, as is keeping lawn fertilizer out of the lake. McMahon also recommended not removing lake wood, as it can be a fish habitat.

Sometimes there is a struggle with stormwater runoff going into lakes, but this can sometimes be improved by getting more natural vegetation in the area to slow the water down for soil absorption instead of carrying contaminants to the lake. “Lake associations—neighbors’ grassroots efforts to do native plantings—have had a significant impact,” McMahon noted. “We’ve also found we make an impact disseminating our research to Wisconsin, Minnesota, and Michigan to raise awareness of what people can do to help our lakes.”