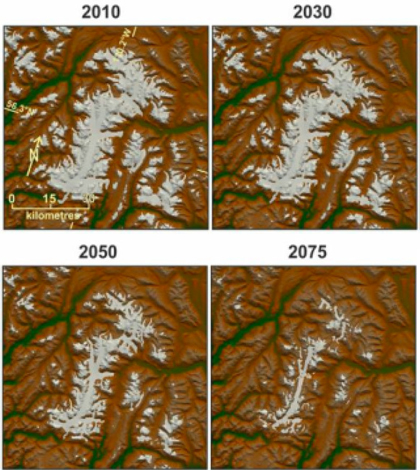 Glaciers are expected to retreat over time. (Credit: Garry Clarke)

Projected glacier loss in Western Canada may be even worse than previously estimated: around 70 percent loss by 2100, according to a press release from the University of British Columbia.

There are 17,000 glaciers in British Columbia and Alberta providing benefits including water for hydroelectric power generation, mining and agriculture. They also provide cool water for natural headwaters and temperature regulation for local ecosystems. Most of the glaciers are in jeopardy. Estimated glacier loss varies by area conditions and is expected to range from 50-90 percent.

Although the glacier cover in some areas may not appear that different, the glaciers are actually thinning at an alarming rate. Many are now only 100 to 200 meters thick and are losing about 1 meter per year. In other regions, the glacier retreat is evident. Eventually areas with glaciers now may begin to resemble mountains like those in Colorado and California which have relatively little ice. The last glacier holdouts are likely to be in Canada’s northwest corner.