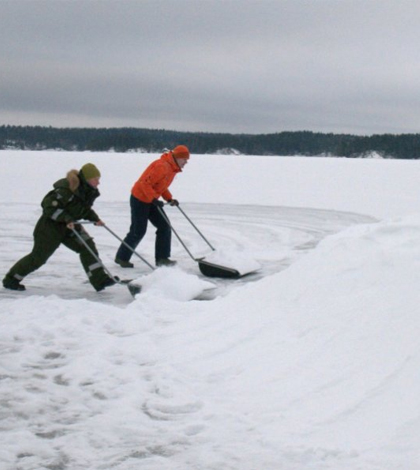 Piling a human-made snowdrift in the breeding habitat of the ringed seal in Lake Saimaa, Finland. (Credit: Mervi Kunnasranta)

A new study shows that human activity can be a force for good in helping endangered animals cope with climate change, according to a University of Eastern Finland press release.

The drifts, formed before the seals’ breeding season, were made using shovels and pushers to provide safe homes for the seals and their pups. In addition to the manmade snow drifts, researchers also planted unobtrusive tracking devices to monitor the seals’ reproductive progress.

The scientists say the Saimaa ringed seals’ biggest threat is their pups’ high mortality rate. To save the seals, they recommend activities that will increase pup survival rates.