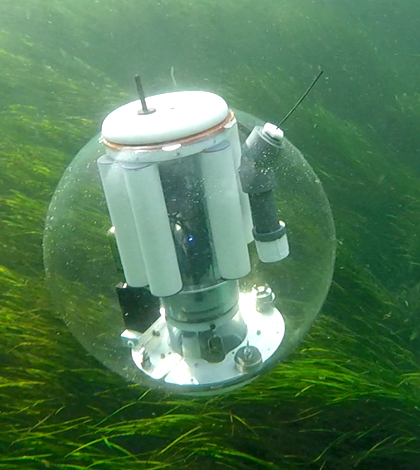 The HydroSphere, a new type of autonomous drifter developed by Planktos Instruments, is looking to change the way that scientists study rivers and other freshwater bodies. The device makes it easier to gather spatial and temporal data in such studies while filling in gaps other monitoring approaches leave behind.

“You have these networks of buoys that have great time series of data,” said Scott Ensign, owner of the company. “But what you really want to do is connect the dots.”

Ensign launched the company back in 2013 with an eye toward sampling in rivers. There are already plenty of ways to study rivers of course, but none that can achieve the kind of data he was after.

The goal was Lagrangian sampling, a type of approach used commonly in oceans to study conditions as they change with the movements of currents and other swirling dynamics. There wasn’t anything on the market that could do that in rivers at the time, and Ensign was in for some challenges as the HydroSphere came to be.

“We spent the first year or so of the project trying to make sure it could go down rivers,” said Ensign, discussing the HydroSphere’s design. In a nutshell, it uses a polycarbonate sphere to house a number of sensors for measuring water quality and a GPS tracker. “So if you’re a ball, it’s easy to be rolled off the bank and back downstream. It’s also effective if it hits debris.”

Sensors within the sphere are recessed, giving them access to the waters nearby. Parameters that they record are similar to those measured by typical water quality sondes. The data can be easily downloaded from the sphere and transferred to a computer, Ensign says.

One beautiful feature of the design is that it allows for a little bit of water to enter into the sphere, easing the interactions that the device has with moving waters around it. It gives it some momentum as it’s pushed downstream by currents. The feature also helps the sphere to be neutrally buoyant, which is something that smaller drifters can’t boast. Because of their designs, usually modeled after buoys, these drifters also have a tendency to get snagged on shorelines. That limits the amount of data that can be gathered.

“It acts as a particle drifting below the surface so it can go far downstream. Compare that to the buoys that flow on the surface, you’re able to go about 10 times as far,” said Ensign. “It’s opened up a whole line of scientific questions. … The longest drift we’ve had so far is 40 kilometers.”

After the HydroSphere has sampled for the desired channel length, there is a cartridge of carbon dioxide that releases from within to bring the sphere to the surface. The user has the ability to program when the cartridge triggers and can then plan out a field trip to retrieve it using the GPS.

Before that, the device floats along while remaining concealed underwater. That provides the HydroSphere with protection from vandals.

“Some of the most surprising things has been watching these things move down river after storms. I was watching one on Google Maps once and I thought someone had taken it out of the river,” said Ensign, discussing a test deployment on a river he’d studied extensively in the past. “One time, after a flood, the flood waters had taken it up near some houses. But 12 hours later it was back in the tidal estuary and it had flushed back down. I thought I knew the system like the back of my hand. It blew my mind.”

The HydroSphere’s tough, polycarbonate construction has also held up well in several deployments, Ensign says. These include rivers in Florida and North Carolina and lakes in Wisconsin.

“That suite is pretty standard. What’s slightly unique is the capability to measure light intensity,” said Ensign. “Imagine the device floating down the river, going up and down as it’s moving. It replicates what phytoplankton are doing and is seeing the light regime they experience. It’s really helpful for estimating productivity in a river. And you can do that with standard limnological techniques, but we’re actually measuring the particle movement through space and time.” Other aspects of operating the device are quite similar to using a water quality sonde, Ensign says. Calibrating the sensors is the same, as is setting up a logging interval. The most important thing to program is the surfacing mechanism.

With their ease of use and novelty, a few scientists are already using HydroSpheres to tackle pressing issues. Ensign tells us that one project led by Nathan Hall, research associate at the Institute of Marine Sciences at the University of North Carolina, Chapel Hill (UNC), is using one to incubate phytoplankton.

“He’s using the HydroSphere as a little lab. While it’s floating downstream, he’s using little mesocosms to measure phytoplankton growth,” said Ensign. “His research is aimed at predicting harmful algal blooms near the Cape Fear River to inform drinking water advisories, to understand the dynamics of the river that allow harmful algal blooms to occur.”

Martin Doyle, director of the Water Policy Program at Duke University, is another researcher testing out the HydroSphere. He is attempting to measure the metabolism of the Mississippi River and others on the East Coast as an indicator of overall aquatic health.

The device was also recently used on Wisconsin’s Sparkling Lake during a collaboration with Emily Stanley, professor of zoology at University of Wisconsin – Madison, to gather data that could be compared to those taken by a FLAMe sampler. The Fast Limnology Automated Measurement platform is a boat-mounted system with sensors set up to sample water quality as fast as boats can go.

“The FLAMe approach captures measurements of a lake at one time. Ours is the opposite,” said Ensign. “… The HydroSphere data can help you interpret the FLAMe data. We’re fitting the pieces of spatial and temporal together to understand those dynamics and what creates that pattern and what does it mean for what’s going on in a lake or river.”

More deployments are in the works for the future. Ensign says that the San Francisco Bay area is at the top of the list. The ultimate goal is to commercialize the HydroSphere, which is currently patent-pending. Ryan Neve, a research technician at UNC’s Institute of Marine Sciences, contributed to its hardware design.