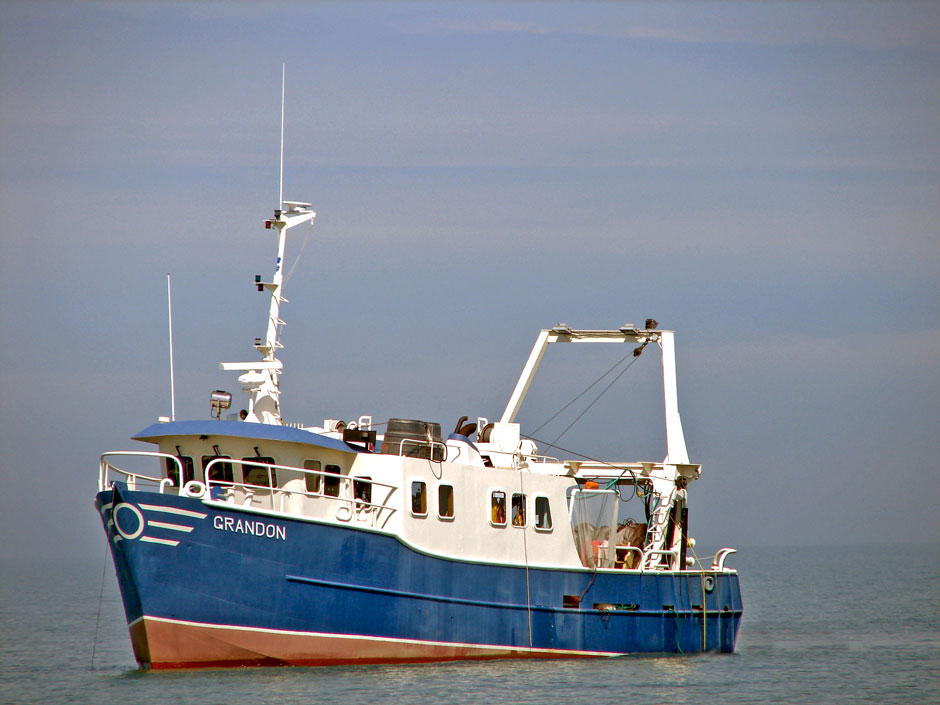 Yellow perch are a species central to the culture and economy surrounding Lake Erie. With the largest commercial fishery and a prolific sportfishing industry, Lake Erie’s yellow perch are a treasured study subject for environmental scientists. Daily bag limits and other public wildlife regulations rely heavily on the work of scientists like Ann Marie Gorman, one of the Fisheries Biologists responsible for coordinating ODNR’s Central Basin Bottom Trawl Survey.

The survey, ongoing since 1990, conducts seasonal assessments of the bottom fish community in Erie. It aims to index annual recruitment and catch-at-age of yellow perch. These data are combined with trawl, commercial and recreational harvest information from agencies around the lake (MIDNR, PAFBC, NYS-DEC, OMNRF) and are used by the Yellow Perch Task Group of the Great Lakes Fishery Commission (GLFC) to generate annual population estimates and recommended harvest levels. The Lake Erie Committee uses this information to set the annual lake-wide quota for yellow perch.

The team trawls for fish for 10 minutes at each sampling site; 57 sites from Lorain to Ashtabula. They catch and identify different age groups and distribute those numbers to estimate and forecast the population for each age group. The same trawls and sites are used each year to allow comparisons from one year to the next. An obstacle the team has come up against is that fish behave differently in the presence of a thermocline or low oxygen conditions at different times of the year, posing a real challenge to execute fair, uniform trawls. “Prior to when I started at the Fairport Fisheries Research Station 15 years ago, biologists noticed that the low oxygen conditions in the Central Basin seemed to have a negative effect on the number of yellow perch caught in our trawls,” noted Gorman. “Since then, we have been collaborating with the Lake Erie Biological Station (USGS), the Aquatic Ecology Lab at Ohio State, the Sandusky Fisheries Research Station (ODNR’s west basin office), and the State University of New York Environmental Science and Forestry at Syracuse (SUNY ESF) to better understand how hypoxia affects the distribution and health of yellow perch and how these changes may impact our annual population estimate.” 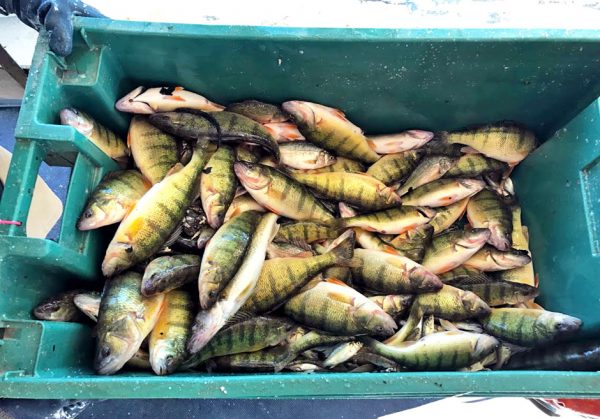 Ann Marie Gorman and her team hope to use yellow perch as a model for other species with similar behaviors and habitat preferences whose relative abundance may also be misinterpreted. (Credit: ODNR)

Observations of hypoxic conditions and lake turnover affecting fish populations tend to be common in Lake Erie. These conditions develop as surface waters (epilimnion) warm in the spring, creating a distinct barrier (thermocline) against the cool, dense water along the bottom (hypolimnion). Bacteria consume oxygen while feeding on dead material like algae in the hypolimnion, resulting in the low oxygen conditions. These oxygen-poor conditions persist each year until strong winds and waves associated with autumn storms mix the layers once again (lake turnover).  The dynamic hypolimnion typically exhibits a hypoxic and sometimes anoxic environment that can significantly disrupt the yellow perch populace.

“Not being limnologists, our initial understanding of hypoxic conditions was extremely simplistic, and we expected to easily classify each trawl as being hypoxic or normoxic for our analysis. When we began taking multiple dissolved oxygen profiles at each trawl, we realized how patchy and dynamic hypoxic areas could be. Sometimes trawls began in hypoxic conditions and ended in normoxic conditions, indicating that we crossed a horizontal hypoxic edge and potentially an aggregation. Sometimes the same spot was hypoxic at one point in time and normoxic a few hours later,” explained Gorman.

The thickness of the hypoxic layer is an essential component to these analyses. The trawl typically fishes the bottom 1.8 m of the water column. If the hypoxic layer is thinner than the height of the trawl, the team may trawl through a fish aggregation at the vertical edge. This could result in a contradictorily high catch at a site that appears to have low levels of dissolved oxygen at the bottom.

“Hypoxic conditions (how low the dissolved oxygen gets, how thick the hypoxic layer is, how long hypoxia lasts into the fall, and how far hypoxic conditions are spread spatially) are worsening and occurring more frequently, even in the shallow west basin,” explained Gorman. “By developing a method to standardize catch rates for the influence of hypoxia, we hope to improve the accuracy of annual population estimates.”

The fluid location of the hypolimnion layer is also crucial to the survey team’s catches. Similar to water sloshing in a bathtub, the low-oxygenated shelf moves and shifts below, typically lying anywhere from 2-12 feet from the lake’s bottom. To avoid low dissolved oxygen, yellow perch may aggregate nearshore of where the thermocline intersects the lake bottom (i.e., the horizontal edge) or above the hypolimnion (i.e., the vertical edge).

“We became especially concerned in August of 2008 when we caught over 10,000 age-0 yellow perch in one 10-minute tow,” explained Gorman. Click To Tweet“This was the second highest age-0 catch we’d ever had, but it was surrounded by catches that were well below average. We later determined that we had trawled across a hypoxic edge and that we had hit a large aggregation of fish.” 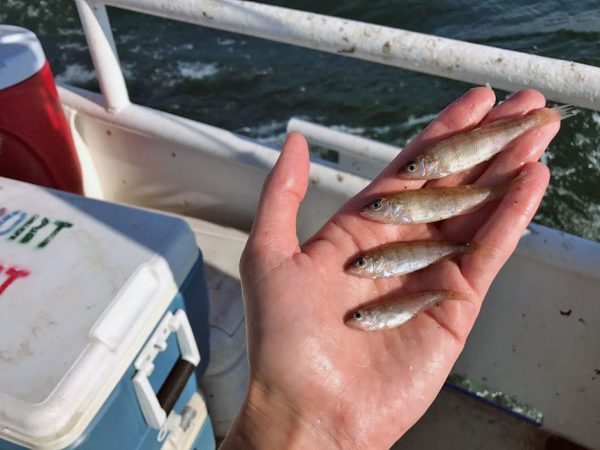 Including that trawl would have ranked that year’s class in the top 15th percentile. However, as tracking progressed through that year’s class of age-1 and age-2 fish, further data determined it should only rank in the 40-60th percentile. That portion of the population would have been severely overestimated and could have led to an unnecessarily elevated quota and harvest had the anomaly been heeded.

“We anticipate that understanding the behavioral response of yellow perch to hypoxia will help us improve our annual population assessments, although the dynamic and patchy nature of hypoxic conditions has made this an extremely difficult task,” said Gorman. “We are working with collaborators to generate a more sophisticated approach for handling this issue.”

Currently, the team uses the YSI ProDSS Multi-Parameter Water Quality Meter to record temperature and dissolved oxygen profiles at the beginning and end of every trawl. Trawl surveys are dependent on periods of stratification (i.e., pre, during and post-stratification surveys), and they also use this instrument to verify lake turnover.

They collaborate with Ohio State and Sandusky Fisheries Research Station to develop models to assess the link between catch rates and the presence or absence of hypoxia along with the thickness of the hypoxic layer. They are working to pair this site-scale information with a lake-wide 3D model of hypoxia, which can be found at https://www.glerl.noaa.gov/res/HABs_and_Hypoxia/hypoxiaWarningSystem.html

“Our goal is to improve our annual population estimates through a better understanding of the relationship between yellow perch distributions and hypoxic conditions. We are collaborating with Drs. Libby Marschall and Ben Marcek at Ohio State to model yellow perch habitat using environmental variables including temperature and dissolved oxygen. Results from this work will help us determine if modifications to our survey locations could improve annual population estimates.”

The team has collaborated on and continues to assist with several offshoots of this research. Dr. Karin Limburg (SUNY ESF) is a co-PI on an NSF grant to develop novel approaches for exploring the spread and impacts of deoxygenation in fish species from Lake Erie, the Gulf of Mexico, and the Baltic Sea, including the use of otolith microchemistry, eye lens chemistry, and environmental toxicology.

“We anticipate research from Ohio State in the very near future using acoustic telemetry tagging to assess fine-scale behavior of adult yellow perch in relation to hypoxic conditions. Results from this work could help us better understand how far away and how quickly yellow perch can respond to hypoxia and what levels of hypoxia they can withstand and for how long.”

The Central Basin Bottom Trawl Survey will continue to assess the relationship between hypoxia and yellow perch distributions until a sophisticated method is developed for addressing the potential effects of hypoxia on population assessments. They are committed to fair harvesting and lake-wide population reporting and look to further the understanding of local ecological trends based on oxygen levels and other environmental and aquatic factors.