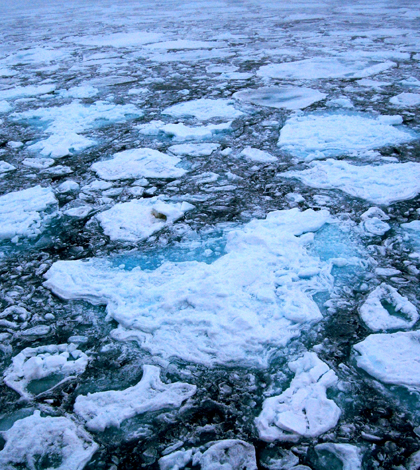 Among the issues that make climate change such a pressing global challenge are feedback loops: processes caused by warming temperatures that, once underway, accelerate the warming that caused them.

“It’s a really quite dreadful feedback loop, and it doesn’t look like the natural processes are going to stop it,” said Leslie Field-Barth, CEO of the non-profit Ice911 Research Corporation and a consulting professor of electrical engineering at Stanford University.

Though the ultimate solution is to replace greenhouse-gas-emitting fossil fuels with renewable energy, that might take more time than we have, Field-Barth said. She thinks this is one place where humans can step in and give natural systems an artificial boost, using materials to promote ice formation and make it more reflective. She founded Ice911 to pursue that goal, and she’s partnered with polar instrumentation experts to develop novel sensors systems to measure impacts and effectiveness of the approach.

Throughout six years of lab and field tests from mountain lakes in the Sierra Nevadas to Canada and a private pond in Minnesota, Field-Barth and her team of volunteers have tried materials and methods from covering ice in sheets of various materials to adding sandlike hollow glass spheres to ice and snow.

Their research shows that adding some simple materials to water is effective and less disruptive than sheets. Though they’re keeping their most promising material under wraps for now, Field-Barth says it’s simple and “utterly safe.”

“As far as anybody who’s looked at this and knows the materials we’re putting in there can tell, we can’t see a negative ecological impact from it, so that’s very exciting,” she said. To test how well their additives affect ice formation and albedo, Satish Chetty, of Beyond 66 Solutions and Ice911’s chief technology officer for instrumentation and field testing, developed an in-situ sensor station that provides continuous data on ice thickness and reflectivity in both untreated water and test chambers containing various materials.

The Solar Weather Ice Monitoring Station consists of a buoy supporting solar panels for power with a batter backup, a Linux computer for command and data handling, a 30-foot temperature string with sensors every 6 inches, and high-resolution cameras.

Each camera looks out over four sensor-equipped arms that extend from the buoy meant to cover a separate test bed. Each arm carries a solar radiation sensor pointed down at the ice that gives an idea of how reflective the surface is. Data from those sensors can be compared with readings from another radiation sensor on the central buoy that points upward to measure the incoming radiation. A sunset over a frozen mountain lake in the Sierra Nevadas from a SWIMS onboard camera (Credit: Ice911/ Satish Chetty)

Though recent field tests have included an off-buoy weather sensor, Chetty said they plan to have one integrated into the buoy for a potential test in Greenland in 2014.

Having a system to collect continuous data on the ice conditions is valuable because it ensures that they’ll be sure to capture periods of thaw and melt without having to repeatedly head out onto the ice with a handheld pyranometer. Those are important times because they’re hoping to show that their additives freeze earlier in the year and melt later.

Having sensors running 24 hours a day has revealed some surprising ice behaviors that they otherwise would have missed, including ice giving off radiation in the middle of the night.

“We saw some voltages registering on our sensors, and we said definitely this has to be a sensor fault or a software fault,” Chetty said. “But it would happen on a very particular cold night with certain parameters, and we found out that the ice actually gives off heat under certain environmental characteristics.”

So far, the data from a small-scale experiment show that water with the additive freezes 1.45 times faster, lasts 1.77 times longer in sun and has a higher albedo than the control.

Chetty said they’d like to expand the system to include more sensors underwater, including cameras and radiation sensors. That would allow them to see the structure of forming ice, as well as see how much radiation is passing through the ice and additives and into the water, in addition to how much is coming in from the sun and bouncing off the surface.

Field-Barth said that the dream dataset would include information on all of the heat and energy and mass fluxes entering and leaving the study area, allowing for a calculation of mass and energy balances.

“That would delight this engineer’s heart,” she said.