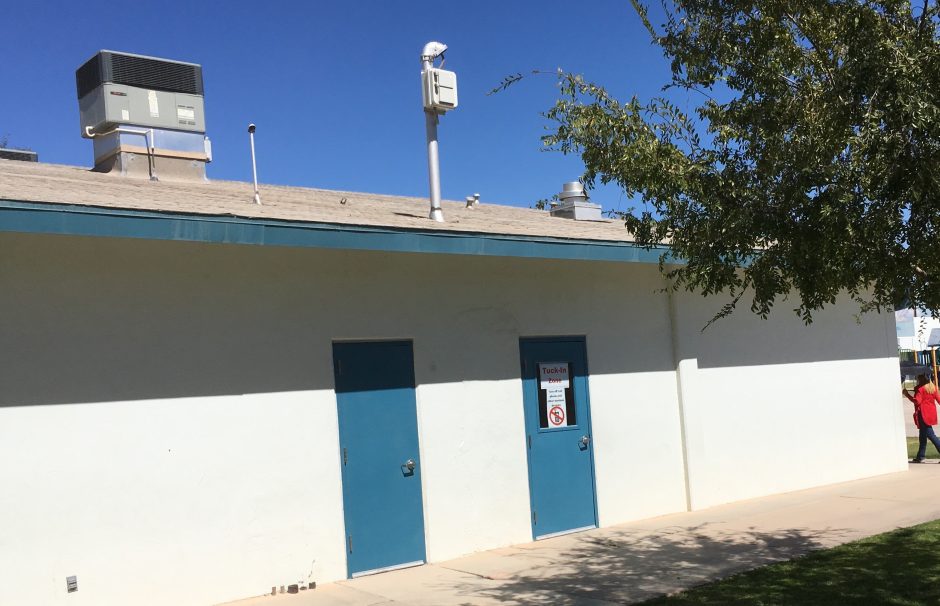 A monitor located on the roof of a public school in Heber, CA. (Credit: Comite Civico del Valle)

The county is subject to many air pollution sources such as field burning, unpaved roads, several industrial facilities and its close proximity to the Salton Sea. The City of El Centro, California, which is located in the county, has the fifth-worst air quality in the United States, according to a study by the American Lung Association.

While there are several different types of air pollution, particulate matter (PM) is a main concern in Imperial County. PM is a mixture of extremely small particles and liquid droplets that get into the air. When inhaled, PM can affect the heart and lungs and result in serious health effects. In Imperial County, the health effects are becoming more evident to its most vulnerable citizens. The California Environmental Healthy Tracking Program has reported that Imperial County has the highest rates of emergency room visits and hospitalization for asthma among children.

“Particles that are less than 10 micrometers in diameter cause the most problems,” said Alexa Wilkie, program manager from the California Environmental Health Tracking Program. “They can get deep into your lungs and even your blood stream. Data shows that PM measuring less than 10 micrometers is present for six months or longer in Imperial County.”

Efforts have been made to monitor the air quality. Five regulatory air monitors are placed throughout the county to measure general ambient air quality and determine if the county is in compliance with federal and state standards for regulated pollutants. These monitors provide important data but aren’t placed to provide information on a single pollutant. Specifically, they aren’t placed where there are known high levels of PM. In addition to this, five monitors aren’t able to provide the data for an entire county that spans 4000 square miles. Residents wanted monitors located in areas closer to their homes and schools that would specifically provide PM data. Because the regulatory monitors can cost more than $100k, acquiring more stations isn’t feasible.

Out of the need for more community-level data, the Imperial County Community Air Monitoring Network was formed. The network was built through a partnership between The California Environmental Health Tracking Program, the Seto research group at University of Washington and the Imperial County community organization, Comite Civico del Valle. With funding for a four-year study from the National Institute for Environmental Health Science’s Research to Action Program, the network purchased 40 Dylos DC1700 air quality monitors for small monitoring stations. The DC1700 is a light-scattering particle counter. The Imperial County monitoring stations include the DC1700s, temperature and humidity sensors and microcontrollers that transfer data to the internet. Residents can now sign up to receive air pollution alerts.

While the five regulatory monitors provide ambient air quality for the county, the installation of the 40 monitors provides community-level PM data the residents requested. The community is now armed with data for the areas where they live and travel throughout the county.

From the outset, one of the most important aspects of the network’s success was the involvement of the local community. Through the establishment of a Community Steering Committee, residents were recruited to help select sites for the monitors and develop the priorities for the project.

“One of the goals of the project was to provide the community with real-time data they need to protect themselves from exposure to PM pollution,” said Wilkie. “The community can now check real-time data online and take action to avoid exposure when the PM levels are high.”

In addition to keeping residents informed, the network has also gathered important data that can drive action.

“There is a lot being done locally by community members involved in the project to try to initiate actions that will mitigate pollution,” said Wilkie. “Our local partners, Comite Civico del Valle, have provided local leadership on many initiatives. Their advocacy efforts have contributed to the passage of legislation such as Assembly bill 617 sponsored by California Assembly Member Eduardo Garcia.”

The bill seeks to increase monitoring efforts and impose stricter penalties on polluters.

For now, the Imperial County air quality monitoring project is ongoing and shows how the right monitoring equipment and available data can make positive impacts in our communities.