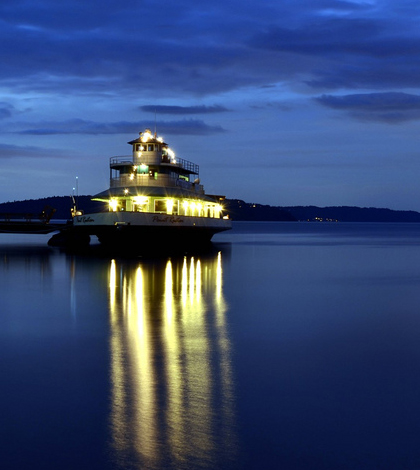 A ship docks one evening on Puget Sound. (Credit: Micah Sheldon/CC BY 2.0)

In Puget Sound, scientists at the University of Washington have completed two studies looking at changes in the waterway’s foraminifera. By studying the single-celled organisms that live on the sea floor, the researchers say it is possible to learn more about the Sound’s changing water quality.

The two investigations both relied on analysis of data collected from Puget Sound by others at the Washington Department of Ecology. These included metrics on water quality and the surrounding environment as well as sediment samples.

Both studies looked at the two major groups of foraminifera. One produces shells of calcium carbonate, while the other has shells consisting of tiny grains of sediment stuck together. Both types of foraminifera shells readily preserve in the sediment and document the environments in which the organisms live.

Scientists say that some species of foraminifera are highly sensitive to environmental stress, and disappear rapidly when trouble arrives. Others are more tolerant, thriving where most do not and acting as opportunistic colonizers in areas like sewage or industrial waste outfalls. A variety of foraminifera (or forams) — single-celled, marine organisms that live on the sea floor. (Credit: Burke Museum of Natural History and Culture / University of Washington)

In all cases, scientists at U. Washington found that the diversity and numbers of foraminifera living in Bellingham Bay and the two inlets have gone down over the years. The declines are consistent with others that have been measured in snails and other larger, similar animals.

Researchers found that many sites in Bellingham Bay and Bremerton are now dominated by particularly pollution-tolerant species of foraminifera. In addition, very few foraminifera were present in 2008 samples from Bremerton’s Sinclair Inlet.

But one of the most surprising findings to the scientists was that there was no correlation between foraminifera and individual pollutants, like mercury and other classes of contaminants analyzed. They add that the decline in the diversity of foraminifera and rise of pollutant-tolerant species continues despite cleanup efforts that have been going on in both Bellingham and Bremerton since the mid-1980s.

The next question for researchers, then, is to figure out what is causing the decline. Since pollution levels are within accepted limits, the expectation is that the cause must be an external one.

While that work is underway, scientists have been able to lift a clue just by inspecting the foraminifera shells. Many of the calcium-based shells show signs of breaking down, including holes and missing pieces. That suggests that more acidic waters could be hurting them.

In Bellingham Bay, where there is a lot of agriculture and logging, as well as a paper industry, decomposing organic matter could be causing more acidity. The scientists say the same interactions could lead to lower oxygen levels in the water as well.

With knowledge of the disintegrating foraminifera shells, the state department of ecology is considering what additional data should be collected to ensure the health of the specific study areas and Puget Sound as a whole. Dissolved oxygen levels, as well as pH, measured at the bottom of the areas would be helpful in making those determinations.

The University of Washington scientists say that their two studies only provide a snapshot in time of the health of the areas they looked at. In the future, they are planning other investigations into the foraminifera of Commencement Bay and other areas within the Puget Sound watershed.