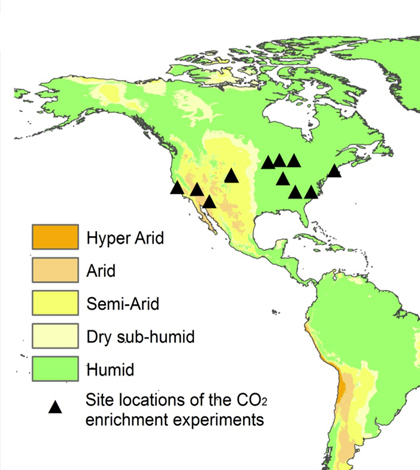 When scientists saw greener vegetation in satellite images of drylands around the world, they began searching for a cause. Some proposed the extra color could be due to increased precipitation, but the two were not always found together. In a meta-analysis including 45 studies from eight countries, researchers posited that increased concentrations of atmospheric carbon dioxide increases plant water-use efficiency and drives vegetation greening on a global scale.

The team found that when atmospheric CO2 was experimentally increased to 1.2-2.0 times the ambient level, soil water availability increased by 17 percent in drylands and 9 percent in non-drylands. The authors said that other factors such as precipitation, invasive species encroachment and land-use change may influence greening on a local scale.

As the concentration of CO2 in the atmosphere rises, plants become more water-efficient because they no longer have to keep pores in their leaves called stomata open for as long to photosynthesize. Stomata are sites of gas exchange where plants take in CO2 and expel oxygen, losing water in the process. Since plants lose less water, they are able to leave more in the soil for others to use.