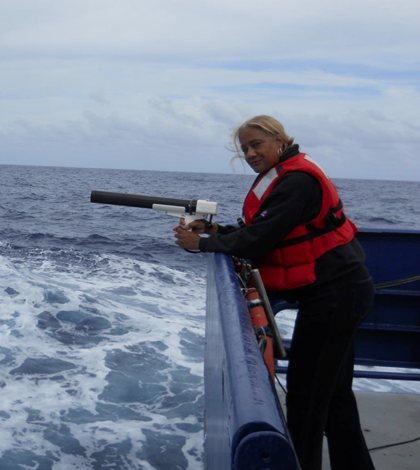 Jacquelyn Hams aboard the R/V Revelle in the Indian ocean with an XBT, a torpedo gun-like instrument for measuring ocean thermoclines

Since the 1980s, scientists have increasingly recognized as globally important an occasional tropical weather cycle that originates in the Indian Ocean and has influences on El Nino events, Indian monsoons and pineapple express storms in North America.

And thanks to one teacher’s time on a research vessel, this weather cycle is also influencing students in a Los Angeles community college.

Jacquelyn Hams, associate professor of earth sciences at Los Angeles Valley College, spent two months in 2011 aboard the R/V Revelle in the Indian Ocean collecting data on the Madden-Julian Oscillation, a 30- to 90-day cycle that sometimes circles the globe and contributes to global climate and weather patterns.

“The whole idea was to ride out one of these MJOs, and we did ride them out. It was quite an experience,” Hams said. “It was rough, but I’m really glad I was a part of it.”

Hams earned her place on the ship through the NOAA Teacher at Sea program, which pairs instructors with research vessels to develop lesson plans based on the scientific missions. In this case, the scientists aboard the Revelle were participating in Project DYNAMO, or Dynamics of the Madden-Julian Oscillation.

DYNAMO was an international campaign that included ships, aircraft and stationary platforms that facilitated meteorological and oceanographic measurements from a variety of instruments.

The campaign gave Hams a pile of scientific data that she’s since brought back to Los Angeles and built into the curriculum for her introductory oceanography courses. Integrating her experiences into classroom lessons has gone a long way toward engaging general education students who might be taking the only science course that they’ll ever take.

“When you see your teacher on a ship in the Indian Ocean looking at real radar data — for a general education student, in my opinion, it’s a lot better than having a teacher stand up there and show you a PowerPoint or something that may or may not be useful,” Hams said. Hams has used data from DYNAMO to create lessons on plate tectonics, thermoclines, atmospheric layers and ocean currents. The tectonics lesson is based on an image of a volcano chain on the seafloor she captured while operating the Revelle’s echo sounder. The image is tagged with latitude and longitude, which gives students the information they need to fly to the location in Google Earth and use the program’s plate boundary layers to answer questions about the formations.

For the lesson on layers of the atmosphere, Hams gives students a graph of data from a radiosonde attached to a weather balloon launched from the ship. At first glance, the graph is complicated, with layers of data on wind speed and direction, relative humidity and air temperature all plotted against elevation.

“That’s the one where I have to lock the doors before people run out,” Hams said. “They see that and they just freak.”

But by focusing on the line that represents air temperature and watching it change with elevation — first cooling and then warming slightly — the students can picture where the troposphere begins to transition into the stratosphere. In addition to having the classes work with data she helped collect, Hams lays out the online assignments alongside photos of her at the helm of instruments onboard the Revelle or an earlier trip to Antarctica. That helps show community college students where hard work can take you even if you aren’t a student (or instructor, for that matter) at Harvard.

“You have to compete with everything,” Hams joked. “I know they text under the table.”

Image: Jacquelyn Hams aboard the R/V Revelle in the Indian ocean with an XBT, a torpedo gun-like instrument for measuring ocean thermoclines