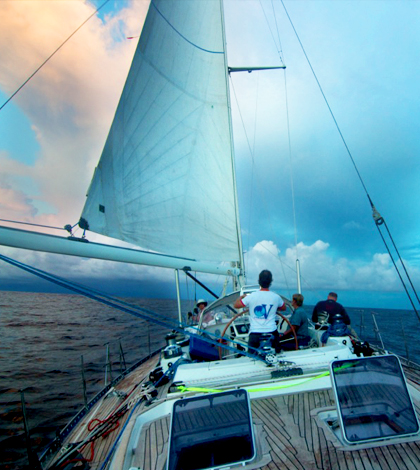 From the heart of European cities, to protected coastal habitats, and even the ground beneath our feet, citizen scientists have shown time after time that, with a little professional guidance, they’re more than capable of gathering scientific data for any number of applications. Last year, a research expedition aboard a standard sailing yacht raised hopes that sailors across the world could help scientists monitor the seas on the cheap.

“I’ve been a sailor my whole life,” said Federico Lauro, microbiologist at University of New South Wales and the research expedition’s scientific leader. “My father, Giorgio Lauro, was a judge for the America’s Cup, Louis Vuitton Cup, and the Olympics just to name a few.”

To put his experience into perspective, Lauro is a national sailing champion in both Italy and Australia. He served his military duty in Italy on board a sailing ship. “So when it came to combining sailing with science, it wasn’t such a great leap, especially considering that there are thousands of yachts cruising around the world at any given time, and all of them are more than willing to help contribute to this research,” he said.

The research expedition was designed as a proof of concept, aiming to showcase the cost-saving and data-gathering potential of monitoring from sailing yachts. The savings were exceedingly apparent: After four months and 6,500 nautical miles aboard the S/Y Indigo V, the research voyage cost less than two days working from an oceanographic research vessel. Monitoring also proved manageable from aboard the Indigo V. The researchers measured salinity, temperature, dissolved oxygen and pH. They also collected water samples upon which they performed genetic analyses of marine microbes, and scanned for trace metals and fluorometry. “Basically, we were looking at how well marine microbes were fixing carbon — and ‘exhaling’ oxygen,” Lauro said.

Participants in future projects would perform similar sampling tasks, though lack of expensive, specialized equipment could hinder their ability to analyze samples. Furthermore, typical sailboats can’t house as large a crew as a research vessel. Lauro noted that only eight people could fit aboard the Indigo V.

An average day on the research expedition weighed more heavily toward work than play, Lauro said.

“All ocean crossings revolve around the watch shift schedule,” he said. “Every cruiser does it their own way, but at all times, someone must be up and monitoring conditions.” Teams of two carried out four- to six-hour shifts around the clock. Between watch shifts, the scientists and crew gathered and processed water samples and took care of more menial chores: cooking, dishwashing and general tidying-up. “There isn’t much leisure time, but we did find some time to squeeze in a movie as a special treat,” Lauro said.

Besides a busy schedule, several unforeseen events challenged the expedition and its crew from the beginning.

“S/Y Indigo V was a newly purchased yacht at (the) start of the Indian Ocean cruise, so we had quite a bit of teething problems,” Lauro said. Those problems included three breakdowns of the Indigo V’s autopilot mechanism, which led the crew to hand-steer “from Cape Town to Mauritius, and then from Maldives to Phuket, and then all the way down to Singapore — much to the consternation of the crew,” Lauro said. A storm coming out of Cape Town pitted the Indigo V and its crew against 60-foot swells, just before the sailboat weathered the tail end of Cyclone Phailin, the second-largest cyclone to make landfall in India. The expedition also had to hunt down the proper permits and funding — the acquisition of which Lauro called a “universal problem when planning expeditions” — but universities in Australia, Canada, Denmark and the U.S. kept the project afloat with some initial financing.

Neither wind, nor rain, nor mechanical failure kept the sailors from appreciating the simple pleasures of the sea, however. Lauro listed a few instances when the scientists and crew got to meet their nautical neighbors up-close.

“We were adopted by a pod of curious Bryde’s whales and they followed us for a few hours,” Lauro said. “They are nearly as big as our boat!

“We spotted a very large great white in the Southern Ocean, and we were lucky enough to catch up to a few pods of dolphins that played on the bow until they got bored with it and then disappeared just as quick as they arrived.”

With the expedition a success, Lauro said the research team has already procured some seed funding and found sailors interested in participating in future expeditions. “We expect to see [that] the first yacht equipped with our instrumentation will be out cruising by the middle of next year,” he said.