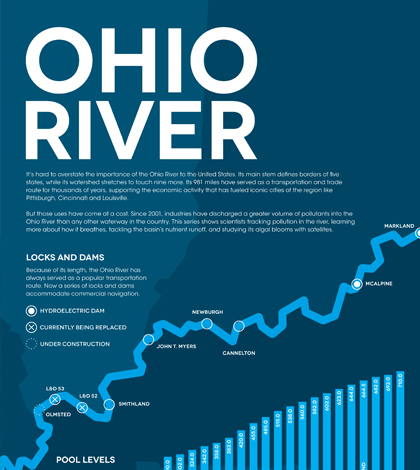 Our summer 2015 print edition focused on the Ohio River, one of America’s most utilized waterways. We tried to portray some of the important uses that the river serves, as well as some of the ongoing efforts put forth to keep it in a beneficial state for cities that thrive along its banks.

Along the way, we touched on the work of the Ohio River Valley Water Sanitation Commission and some of the efforts it supports to monitor the waterway that stretches more than 981 miles. We talked with experts from Marshall University who are tracking the river’s chlorophyll levels from space using Landsat imagery. This effort coincided with another going on at Marshall using dissolved oxygen levels to calculate the Ohio River’s metabolism, or the ratio of organisms in the water that consume oxygen to those that produce it.

Our coverage also looked at things going on near or below the ground, like water flux, that affect the Ohio River’s health. Some of these could be helped by a GIS-based tool developed by Iowa researchers that can be used by watershed managers, both along the Ohio River and the Mississippi River, to enact more effective runoff mitigation practices among other things.

We also had a little fun, publishing a special crossword with terms that incorporated fun facts and history of the Ohio River. Our team also put together an infographic covering things like pool levels, locks and dams and statistics on the waterway’s pollution loads. Check it out below.