Inside the Struggle to Designate Lake Erie’s Water Impaired 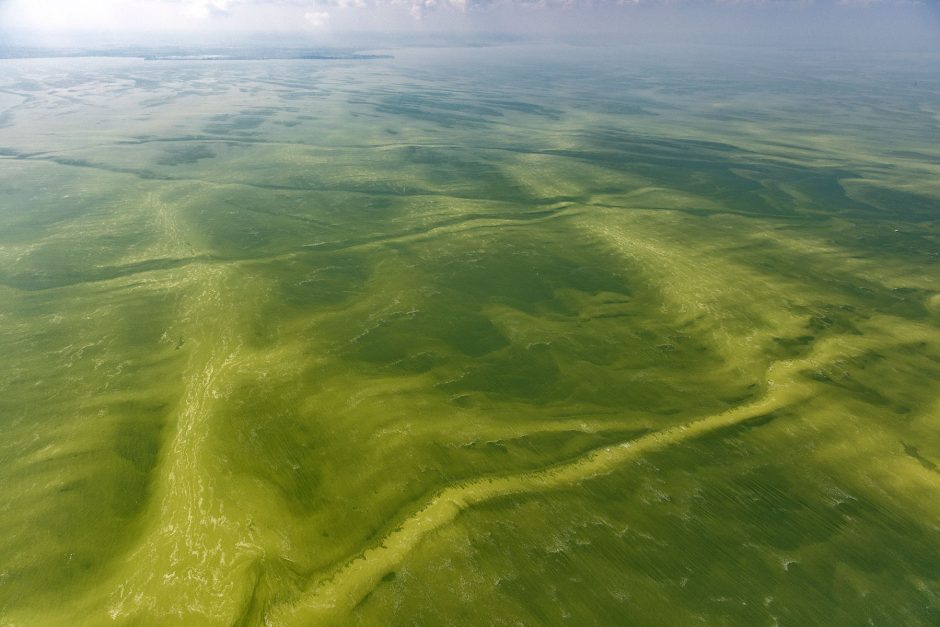 Since the mid-1800s, Ohio has been a locus for industry. As the state cranked out steel, rubber, automotive parts, appliances, glassware, and refined oil, its economy grew—but pollution also became a serious problem. Factories dumped refuse into rivers and into Lake Erie, agricultural runoff ended up there, and city sewers also emptied into the lake. By the late 1960s, the Cuyahoga River had caught on fire, and the shores of Lake Erie were lined with dead fish as algal blooms flourished in its waters.

The fiery river and the presumed “death” of Lake Erie prompted changes at both the local and national level. Leaders in Cleveland worked to improve the sewage system and monitor water quality more effectively. They also helped lobby for national change, and in 1972, Congress passed the Clean Water Act (CWA), which regulated industrial dumping more closely. Also in 1972, Canada and the United States entered into the Great Lakes Water Quality Agreement with the aim of reducing the levels of pollutants going into the Great Lakes.

All of those early efforts notwithstanding, fighting pollution in Lake Erie has been anything but a slam dunk. In fact, the state of Lake Erie’s water has been a subject for political debate and policy battles in Ohio for some time now. In March, proponents of stronger regulations won an important concession when the Kasich administration finally announced that it would declare western Lake Erie’s open waters impaired. Following years of opposition in favor of agricultural concerns, this was a major reversal.

Pete Bucher, the Water Resources Director of the Ohio Environmental Council, corresponded with EM about this issue.

Ready for a change

The impairment declaration is a major change, although it doesn’t carry specific fixes with it.

“I think it is a big change because previously only the shorelines had been designated impaired, now that state has said the open water are impaired as well,” explains Bucher. “Although no immediate change comes from the state doing so it will continue to drive home the point that more needs to be done. We’re hopeful it will drive more resources to northwest Ohio to fund a concrete plan of action.” 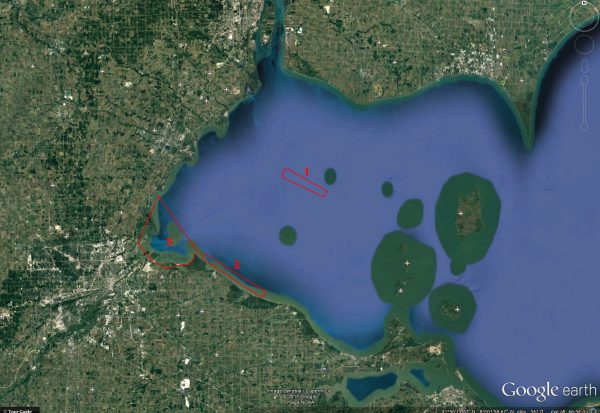 Pilots from Aerodata have been flying over Lake Erie this summer to map out the general scope of Harmful Algal Blooms (HAB) throughout the western basin. In addition to these amazing photos, during the flyovers, additional images are taken by a hyperspectral imager (mounted on the back of the aircraft) to improve our understanding of how to map and detect HABs. The lead PI for this project is Dr. Andrea VanderWoude. (Photo Credit: Google Map by Aerial Associates Photography, Inc. by Zachary Haslick)

The need for a concrete plan of action is fairly plain. Despite decades of advocacy, water quality problems that have continued to plague Lake Erie, and have gotten worse in recent years.

“Ohio has struggled with harmful algae for a long time,” Bucher describes. “Increased rain events have only made things worse in recent history. This is best illustrated by the fact that since 2011 we have seen the three largest Lake Erie algal blooms on record (2015, 2011, 2017).”

Eutrophication is perhaps the biggest water quality issue for the lake and its tributaries as it stands right now.

“Excess nutrients, specifically excess phosphorus, is the problem causing harmful algal blooms,” details Bucher. “These nutrients enter the Maumee River through tributaries and eventually make their way to western Lake Erie. This phosphorus coupled with the warm, shallow water in that portion of the Lake creates a perfect storm for these large algal blooms to form. These blooms disrupt tourism, recreation, harm businesses and pose a public health risk if they produce toxins.”

The 2014 Toledo water crisis was one event that helped force this change in position from Ohio leadership; with millions depending on Lake Erie for drinking water, toxic algal blooms are a major threat. In August of 2014, Toledo’s Collins Park Water Treatment Plant was overwhelmed by microcystin, an algal toxin, and poisoned tap water was distributed among 500,000 homes and businesses in the area. The water was declared unsafe, and the National Guard was brought in to deal with the emergency.

“[The 2014 Toledo water crisis] was one of two recent events,” clarifies Bucher. “11 months earlier Carroll Township residents, in Ottawa County, were told not to drink their water for nearly three days for the same concern of microcystin in their water supply. The challenging thing for the City of Toledo is their water intake is in a location where the algal blooms often amass in the fall. So when the algae does produce toxins it makes things that much harder for their water treatment facility.”

Now that there has been a designation, the Ohio EPA had an open comment period for the entire draft 2018 water quality report that closed on May 4, 2018. The final report was then submitted to the US EPA for their approval.

With the CWA is coming into play, the US EPA might play a larger role in the process—but that will depend largely on how Ohio deals with the problem. The US EPA won’t intervene unless Ohio is failing to implement effective conservation practices.

“The US EPA will have to approve the state’s list of impaired waters as well as the plan of action to improve the various water quality issues,” states Bucher. “In terms of Lake Erie, the state has indicated they don’t intend to develop a total maximum daily load (TMDL) for the western Lake Erie basin watershed which often happens after impairment. In this case, the US EPA’s role may be shaped by the separate, but related, lawsuit filed by the Environmental Law & Policy Center pending in U.S. District Court. I’m confident we can develop an Ohio plan to put us on track to fix Lake Erie, but if we don’t see real funding solutions and a plan to implement conservation practices the US EPA will create the playbook for us.” 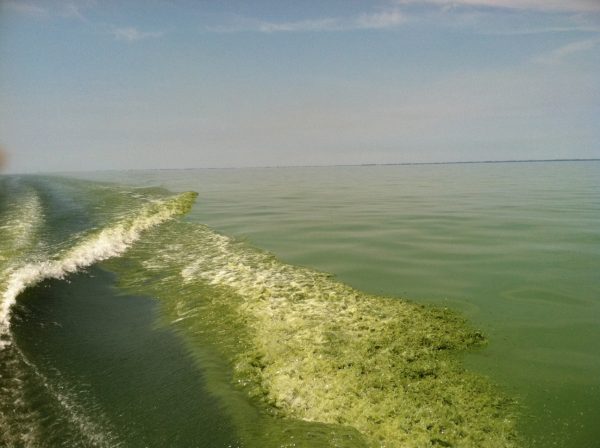 Currently, the Ohio EPA does a large amount of water quality monitoring and research on Lake Erie, as well as Ohio State’s Sea Grant College program, Bowling Green State University, the University of Toledo, and Heidelberg University. Next in the process will be the development of actionable solutions.

“I think every stakeholder needs to collaborate to find real solutions to curtail our state’s nutrient runoff issues,” remarks Bucher. “Heavy rain events will likely not go away in the near future so we need to find ways to keep nutrients on the farm field without forcing producers out of business. To truly reach our state’s 40% nutrient reduction goal, we need a large-scale program that has the resources to implement best management practices on every acre of land in the basin. Without the resources to implement such a plan and measure progress, we will likely see Lake Erie and local communities inundated by yearly large-scale algal blooms for the foreseeable future.”

And while the impairment designation details have yet to be decided, tighter rules for anyone releasing nutrients into the lake or its tributaries, including agricultural concerns, seem inevitable. Part of this process will be identifying polluters and pollutants as part of a transparent public process.

“Leading up to this decision there have been some new proposals made to try and get us on track to reducing nutrients in Lake Erie,” details Bucher. “The first was proposed funding from two Ohio State Legislators that would create the Clean Lake 2020 Plan consisting of up to $500 million over five years for best agricultural practices to be implemented as well as support for local soil and water conservation districts. The second legislative proposal has yet to be released but has been advertised by the Director of the Ohio EPA as a bill with two main goals as it relates to nutrient reduction: a statewide phosphorus permit limit for wastewater treatment plants, [and inclusion of] fertilizer on the list of ‘agricultural pollution.’ Additionally it would direct the Ohio Department of Agriculture (ODA) to establish rules for ‘watersheds in distress’ that are caused by fertilizer.”

Following up with this story this week, EM learned that talks on the Ohio EPA proposed omnibus bill have now stalled between the Kasich administration and the legislature. The proposed bill included two nutrient pollution provisions. The “Clean Lake 2020” plan has begun to move forward this month in the form of Senate Bill 299 and House Bill 643. 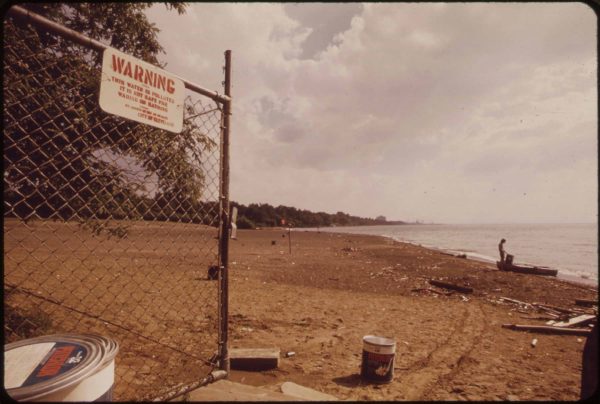 “This is a smaller funding package than originally announced and it is a short-term option that will allow the Kasich administration to spend in different areas to combat the harmful algal bloom issue this year if passed quickly,” Bucher explains. “There is a longer-term funding proposal that would address nutrient pollution and water infrastructure repairs. These resolutions are Senate Joint Resolution 6 and House Joint Resolution 16. If these measures passed they will have to also pass a statewide vote to issue bonds for these projects. It’s unclear how popular these measures are, but the Clean Lake 2020 Plan will likely succeed, testimony in committee [started on May 15].”

In a strange turn of events, the Kasich administration has also just reversed its position on the designation. How this will affect the issue is unclear.

“Governor Kasich has been quoted saying he does not believe the open water of western Lake Erie are impaired even though the Ohio EPA just declared them as such,” adds Bucher. “This was surprising and confusing.”