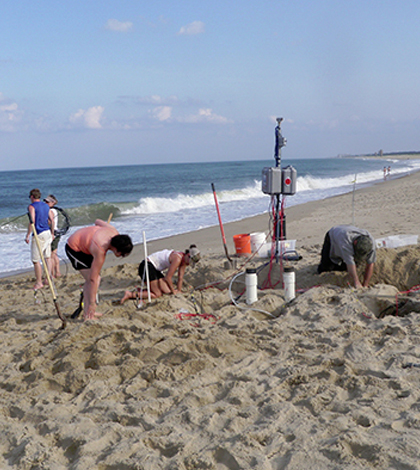 Researchers install instrument arrays in the beach at Herring Point, Cape Henlopen. The instruments were buried in the unsaturated zone to monitor the movement of groundwater in response to waves running up and down the beach. (Credit: University of Delaware)

We see a lot of things when we visit beaches — like seagulls, shells or sand castles. But it’s what we don’t see that may be most important for ensuring the quality of the vacation we have. That is, the exchange that occurs between the salty ocean water out in the open and the fresh groundwater, held in nearby coastal aquifers, flowing down below.

Though it seems like water mixing with water might not be such a big deal, it actually matters more than you’d think. This is because the groundwater coming off of land can contain high levels of nutrients, like nitrogen and phosphorus from agricultural activities, that simply aren’t found in such high concentrations in ocean water. If there is too much nutrient-rich groundwater getting to those nearshore waters, they can spur the formation of algal blooms or lead to fish kills.

In a year-long investigation looking at the issue, researchers at the University of Delaware have charted the fluctuations that go on between saltwater and groundwater in a coastal aquifer during different times of year. The effort was carried out at Delaware’s Cape Henlopen State Park, where scientists set up multiple groundwater sampling wells in a transect running from below the tide line up to the sand dunes on a beach.

The stretch of beach was a good spot to use for the investigation because it had served as a study site for others conducted by U. of Delaware researchers in the past. This let scientists build on discoveries of the past and gave them a nice starting point for the research.

“The overarching idea was to understand how the physical factors — tides, waves, fresh groundwater flowing into the coastal aquifer — influence groundwater flow and distribution of salt in the biogeochemically reactive zone that is the beach aquifer,” said James Heiss, a doctoral candidate studying coastal hydrogeology in the university’s Department of Geological Sciences. Heiss is also the lead author of a paper detailing results of the work, published in the journal Water Resources Research. Other factors under consideration were the slope of the beach and seasonal sea level anomalies. There were 10 groundwater wells used in the effort, from which scientists gathered samples using pumps to pull water to the surface. This was pretty straightforward unless the tide was high. In that situation, researchers had to run tubing under the sand until it reached the target well and then pump water vertically and then out horizontally.

After gathering the samples, each one was assessed for its conductivity, which is a marker of salinity.

This type of sampling continued over the course of a year, with consideration for the variability of tidal stages, tidal range, and changes occurring due to the water table height on land. The study period was fortunate to overlap with the arrival of Hurricane Sandy, permitting researchers to assess the effects of a storm on coastal aquifer dynamics.

But the effects of the storm, which were short-lived, were fairly minimal, Heiss says. There was a small spike in the freshwater coming in and the changes in salinity were not as large as were expected.

“Overall, the seasonal trend we observed was unaffected by that event,” said Heiss.

As for other results of the work, Heiss says that there weren’t many changes in the salinity distribution over the tidal cycle. But when stretched out over a longer time period, to two to four weeks, the spring tide (occurs twice a month) had a higher mixing activity associated with it than the neap tide.

“The mixing is important because saltwater is different than freshwater, the mixing of groundwater. That is different chemically,” said Heiss. “We’re trying to understand how the physical system, the flow, the transport of salt, affects the biogeochemistry of the beach. To understand that, we have to understand the physics, what sets up those conditions to drive those reactions.”

Next steps for Heiss’ work are to focus on the chemistry of the coastal aquifer. This will help beach managers better understand the importance of beaches in controlling the chemistry and health of marine ecosystems.

Top image: Researchers install instrument arrays in the beach at Herring Point, Cape Henlopen. The instruments were buried in the unsaturated zone to monitor the movement of groundwater in response to waves running up and down the beach. (Credit: University of Delaware)