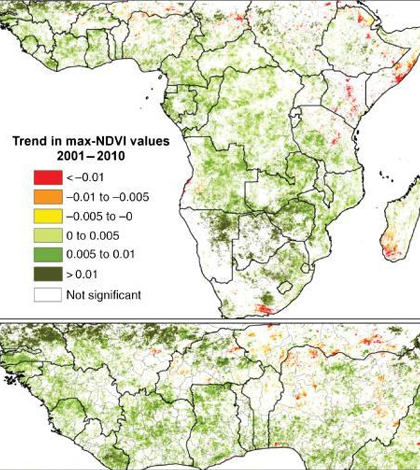 Plenty can change in a decade — even the climate of an entire continent. A European research team led by the University of Leicester studied 10 years of satellite data and found significant shifts in rainfall trends across Africa during that period.

Available online in the International Journal of Climatology, the study mapped rainfall and greenness throughout the continent, revealing reduced precipitation in the Congo, Nigeria and Madagascar, but increased greenness in other areas such as the Sahel zone. The findings highlight rainfall variability in Africa and the benefits of improved meteorological coverage in a region with relatively little.

“Our role in this project was developing a way to monitor the natural resources in Africa from satellite data,” said Heiko Balzter, director of the Centre for Landscape and Climate Research at the University of Leicester, and co-author of the study. European and African organizations alike sought useful climatological indicators that could be derived from satellite data, Balzter said, so the early stages of the project were spent talking to representatives from many of those organizations to better understand their needs.

“We found out that they want robust indicators,” Balzter said. “They do not want any overinterpretation, something quantitative that does not jump to conclusions, but actually just provides evidence for policies.” International cooperation was a hallmark of the study. The European Commission funded the project, while satellite data came from the National Oceanic and Atmospheric Administration. African rain gauge stations provided additional data for the rainfall maps, and methods developed from the study were shared with meteorological organizations in 53 African countries.

The researchers developed a method that simultaneously examines rainfall and vegetation greenness. When both rainfall and greenness diminished in an area, climate change is likely a driving force. However, when rainfall increased in areas with decreasing greenness, non-climatic factors such as land use change and agricultural expansion may be responsible.

Despite a history of intense famines, much of western Africa, including the Sahel zone and the Central African Republic, showed increased rainfall and greener vegetation from 2001 to 2010. Parts of eastern Africa, such as Madagascar, Nigeria and Kenya, experienced browning vegetation and less rain during the same period. In the tropical Congo, unusual dryness has lowered river flow, reducing the carrying capacity of the country’s primary transport routes.

“We didn’t quite expect to have so many areas where rainfall has changed in that 10-year period,” Balzter said. “It’s kind of nice when you find something that’s in your data, when you show something, because equally we might have found that there was nothing but noise in the data.”

Balzter stressed that he and his co-authors were not attempting to interpret the causal relationships between the observed shifts and climate change. Parts of Africa are already known for their variable climate, fueled by temperamental weather phenomenon. Monsoons determine the climate in much of western Africa, while Indian Ocean surface temperatures hold sway over the east.

“Ten years is not really long enough to say that this is long-term climate change, and what the future might hold,” Balzter said. “The importance of the paper, in my view, is that we have a method of how satellite data can be routinely processed to continue providing and updating maps like this in the future.”