The Buffalo River winds through Northern Arkansas for 150 miles; 135 of which are contained within the Buffalo National River under the care of the National Park Service (NPS). The iconic river is culturally important to the state and region, and that’s part of the reason why United States Geological Survey (USGS) scientists are working hard to determine why 70 miles of the river had algae in it last year.

Aquatic biologist Billy G. Justus, of the Lower Mississippi-Gulf Water Science Center (LMG WSC), spoke to EM about the studies on the river and the algal issues.

“We are officially the USGS Lower Mississippi-Gulf Water Science Center,” explains Mr. Justus. “The LMG WSC consists of five states: Arkansas, Louisiana, Mississippi, Alabama, and Tennessee. Collectively we conduct all forms of water investigations, such as surface- and groundwater quantity and quality studies within the region. In my role as a biologist, I research how biological assemblages are affected by water quality and water quantity.”

“To some extent, all three studies that USGS is currently conducting in the Buffalo watershed investigate nutrient sources and pathways,” details Mr. Justus. “Potential nutrient sources likely include a combination of human sources from recreational use, pets, septic tanks, livestock, and fertilizers. By pathways, we mean how the nutrients reach the river from a given source—through surface water such as tributaries or groundwater as in springs or subsurface flow.”

Currently, the team has three studies on the Buffalo or its tributaries: the Big Creek study, the filamentous algae (FA) study, and the Mill Creek microbial source tracking study. However, the USGS has collected data from the Buffalo as part of larger studies such as the National Water Quality Assessment Program for a number of years.

The Big Creek study was the first of the three studies to start and sampling began in May 2017. This study is designed to determine how nutrient water quality and biological conditions compare in sections of the Buffalo River that are upstream and downstream of Big Creek. In 2013, a confined feeding operation began producing swine in the Big Creek watershed. As for the two remaining studies, a history of high nutrients and bacteria prompted the Mill Creek study which began in March 2018, and the increased occurrence of nuisance algae prompted the filamentous algae, which began in June 2018.

The USGS is not taking on these issues alone, however. Collaborations with the National Park Service (NPS), the Arkansas Department of Environmental Quality (ADEQ), and the Arkansas Game and Fish Commission have led up to the three studies.

As part of the Big Creek study, USGS and NPS conducted nutrient water-quality sampling approximately monthly at two sites upstream, three sites downstream, and a site on Big Creek from May 2017 through February 2019. Samples of periphyton, algae that grow on the stream bottom, have been collected at the six sites quarterly. Nitrogen and phosphorus constituent concentrations at the five Buffalo River sites upstream and downstream of Big Creek have not been statistically different. USGS is yet to receive periphyton results, but that part of the analysis is anticipated to begin in the near future. 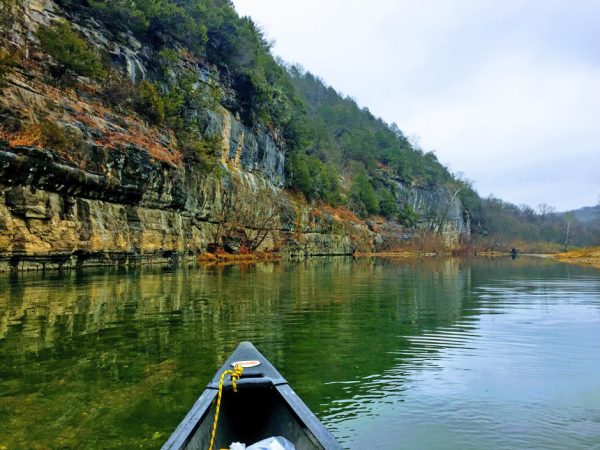 Preliminary results for the Mill Creek study suggest that bacteria in Mill Creek, which feeds the Buffalo, likely come from multiple manure or waste sources.

“Obviously, there are many different species of animals in that location, but because Mill Creek has a small watershed, we focused the analyses on what we considered to be the most prominent and likely sources of (animal) waste—cattle, poultry, and humans,” remarks Mr. Justus. “In the case of humans, problems associated with sewage treatment related to broken or lacking infrastructure had been previously documented.

For the third study, USGS, with help from partner agencies, has been studying why filamentous algae seems to be increasing in the Buffalo River. Nutrient sampling is being conducted at 25 sites that include springs, shallow wells, and sites on the mainstem Buffalo River. Sampling for the FA project which began in June of 2018 is now scheduled into at least 2020. The USGS anticipates that it may take five to six years to determine what variables are responsible for the increases in FA.

“Going forward, we have to determine how nutrients in the river and gravel bars change between fall and winter during times of low human-river use, and spring and summer during times of high human-river use,” Mr. Justus says. “We must also determine how nutrient concentrations in the river and within the gravel bars change following storm events. Once pathways are determined, we could use microbial source tracking to tease out the animal and human nutrient contributions.” 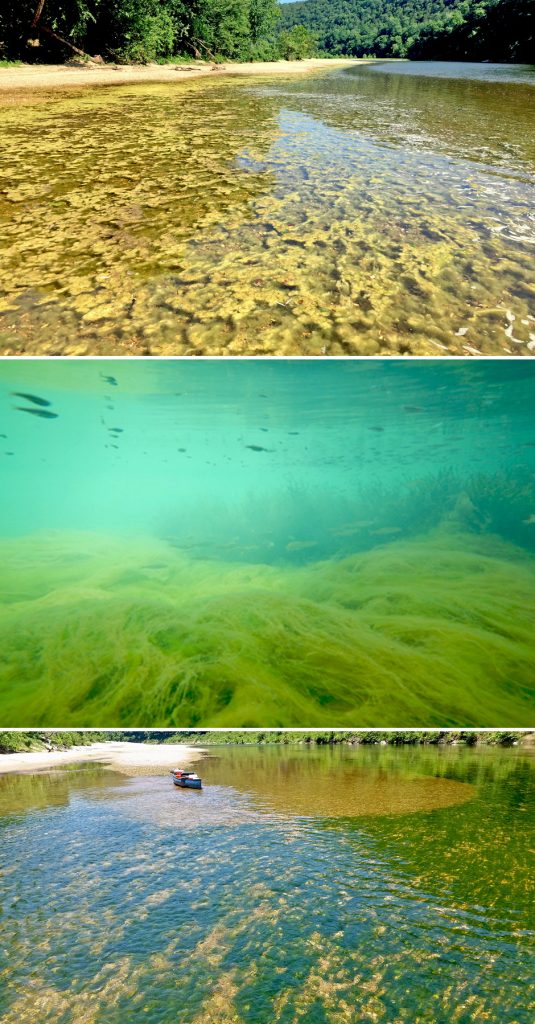 To get these results, the team will need to capture seasonal variability in water quality, collect stormflow/flood samples, and conduct dye tracing over two to three years. Depending on what the sampling revealed, any potential MST study would require one or more additional years, with additional time for formal data analysis, interpretation, and report writing.

Mr. Justus points out that, at the densities that have been documented on the Buffalo in recent years, FA can be viewed as a symptom of suboptimal nutrient-water-quality conditions, in a human context much like a fever.

“Unfortunately, it could be a sign of the onset of a chronic decline,” states Mr. Justus. “The data we have collected suggest there are likely multiple nutrient sources, livestock and human sources, for example, and it also seems that, in this Karst environment, groundwater pathways may be equally important, if not more important than, surface water pathways.”

Although USGS conducts a large range of studies, few people are aware of what the agency does, or of its history.

“USGS was established in 1879, and conducts science investigations for and with many federal, state, and local government agencies as well as non-government partners,” said Mr. Justus. “The USGS provides scientific information on a variety of topics including water, energy, minerals, ecosystems, biology and natural hazards. When it comes to water, we monitor and study streamflow, groundwater, water quality, and water use and availability. Basically, we provide the science that helps decision makers effectively manage the Nation’s water resources.”