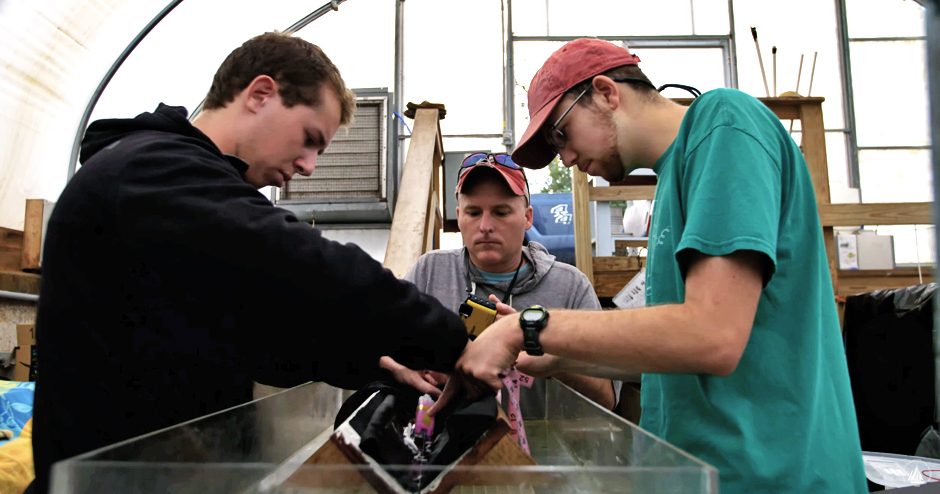 The team tags a squid. (Credit: Screenshot from video via WHOI)

To conduct behavioral research on aquatic species especially invertebrates with softer bodies, tagging and tracking has been a persistent challenge. This is particularly true for species which are often elusive in the first instance. Woods Hole Oceanographic Institution research assistant Seth Cones spoke to EM about recent testing of a new sensor and tagging technology that might make this challenge a bit easier.

“The version of the tag that I’m currently working on was a work in progress in summer 2018,” explains Mr. Cones. “It was an ongoing collaboration with our mechanical engineer from the University of Michigan who would send tags out here for testing, and I would test them and indicate how they were affecting the squid behavior, and recommend changes. So we had many iterations, but now we’ve finalized a version of the tag.”

The goal of the tag is to measure how the animal’s acceleration or activity levels are changing with different parameters such as pressure, temperature and light. 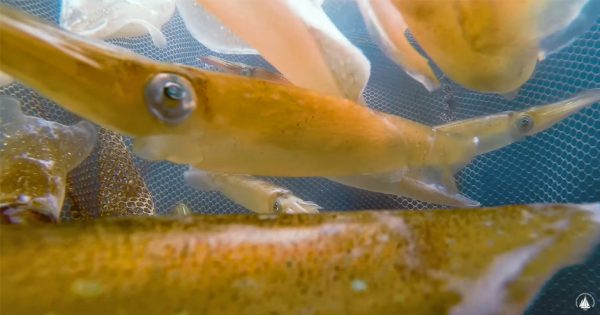 Squid swim in the lab. (Credit: Screenshot from video via WHOI)

“There are many different sensors on the tag,” details Mr. Cones. “There’s an accelerometer that measures at Hz frequency along the x, y, and z axes. There’s also a gyroscope and a magnetometer so we can actually measure the animal’s orientation in the water column and measure its acceleration at all times. There’s also a pressure sensor, a temperature sensor, and a light sensor bundled together and time-stamped. We’re also in the process of testing an oxygen sensor, so that’s hopefully one of the new additions to the tag in the coming year.”

These kinds of data help scientists determine, for example, whether the animal is more active towards the deeper areas of the ocean or the surface.

“That’s one basic example because squid are known to have vertical migrations throughout the day up and down the water column,” states Mr. Cones. “For example, William Gilly found that Humboldt squid were making deep dives into a layer of the ocean where oxygen levels are lower than those at the surface. Squid are very highly aerobic, highly active organisms, so one of the main questions that study posed was, how are the squid remaining active in this low oxygen environment, and why are they making these deep dives there? One of the theories is that they leverage these low oxygen environments to seek refuge from predators that cannot live in low oxygen.”

By integrating these light, pressure, and oxygen sensors, the team hopes to make their own work more comprehensive and gather more baseline data about this cryptic species. 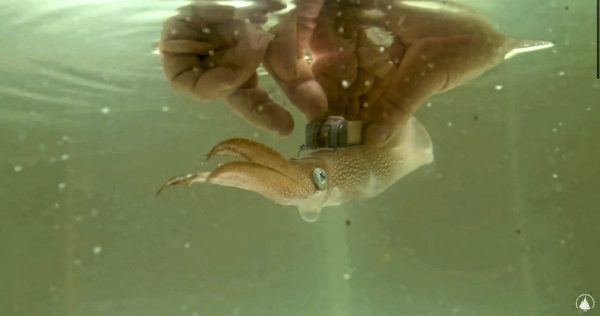 A tagged squid in a tank. (Credit: Screenshot from video via WHOI)

“It sounds really basic, but we don’t really know what the squid are doing,” comments Mr. Cones. “It’s really hard to physically observe a squid in their natural environment, because they do these great migrations up and down the water column, but also because it’s expensive and impractical to go out and observe a squid for hours at a time. We have to try these new tags and logging sensor technologies to get accurate estimates of what the squids are doing.”

Creating a tracker for squishier species

Thus far, the team has not worked with octopus and has instead focused on jellyfish and squid.

“It’s a little easier to tag squid than an octopus because while both are considered cephalopods, squid have a clear, internal shell called a pen,” remarks Mr. Cones. “It gives them much more structure than an octopus, but it doesn’t mean that they’re not good at blending in, which makes it very hard to have direct observational studies out in the wild.”

One of the bigger challenges for the team has been ensuring that they are able to retrieve their tags after deploying them. 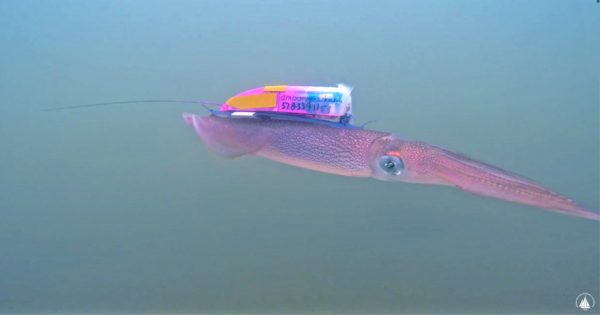 Close up shot of tagged squid. (Credit: Screenshot from video via WHOI)

This is where the neutrally buoyant design comes into play.

“The tag base and the housing that holds the sensors are, together, neutrally buoyant,” remarks Mr. Cones. “If you were to just throw it in the water, it would suspend in the water column. But when they separate, the part that has the sensors in it is positively buoyant, so it stays close to the surface and we can use the radio beacon to retrieve it.”

The researchers started with short deployments of about an hour and extended those to four or five hours once they were confident they could retrieve their tags. They were also, to some extent, at the mercy of the luck of the squid boat’s catch.

“The squid depicted in the photos is probably the smallest one that I would tag,” remarks Mr. Cones. “Most of the other squid we tagged this summer were up to 50 percent larger than that squid. I don’t know if it was really conveyed properly that the tag itself is neutrally buoyant, so although it looks like a big backpack, it is not heavy in a terrestrial backpack sense.” 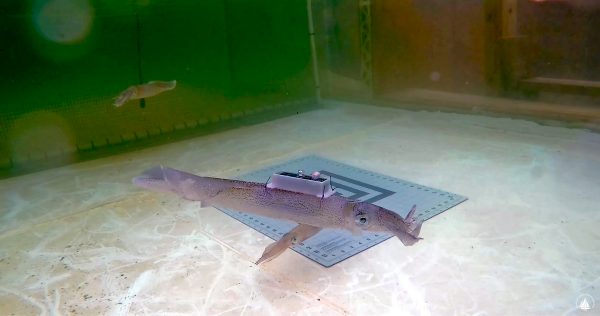 A tagged squid swims among untagged squid for comparison. (Credit: Screenshot from video via WHOI)

The team conducted five local deployments with the tag in summer of 2018 in the more enclosed environment of a local estuary to test the release mechanism of the tag before conducting any open ocean deployments.

“I’ve just started the process of analyzing data, and I’ve been working with Assistant Professor Alex Shorter of the University of Michigan, a mechanical engineer, to input machine algorithms under these tags in the lab in a tank that has constant video recording. In other words, using concurrent video and sensor data to annotate and classify different behaviors, we can see how different swimming gaits (for example, finning, resting, jetting) correspond with orientation and acceleration data,” Mr. Cones says. “This way I use lab experiments to create the basis for the machine learning algorithms, so when we don’t have the visual confirmation, we can predict with a high success rate what that squid was doing.”

Squid behaviors are somewhat analogous with the ways humans sit, walk, jog, or sprint, and collectively these movements make up a kind of “swimming gait.” The team is learning that some squid behaviors are easier to delineate than others.

“If a squid jets, you get this very short, lasting spike in acceleration,” Mr. Cones describes. “Something like that’s pretty easy to quantify, but things like the difference between finning and flapping might be a bit harder. We did about 13 taggings in the lab this summer, so we have a pretty good data bank for all the different behaviors we’re interested in: resting, finning, flapping, and jetting. Hopefully, in the next couple of weeks, we’ll be able to start the process of creating an automatic classifier or machine learning algorithm to start looking at that field data.”

A particular point of pride surrounding this project is that the team is helping to make much of the software open source, and remains open to sharing the tags with other researchers so they can apply the technology on different tag studies. 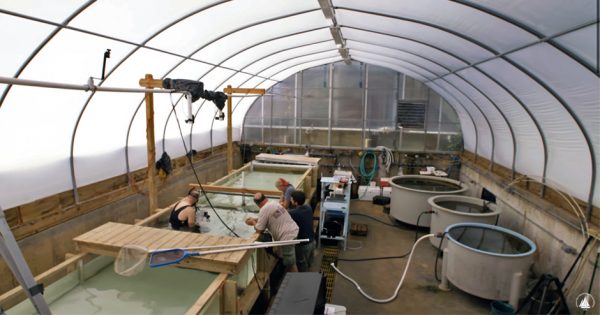 Testing the tags in the lab. (Credit: Screenshot from video via WHOI)

“The cool thing about our tag is that it’s two parts, so you can modify the base to fit your specific species,” states Mr. Cones. “We’re hoping ultimately to share these with other researchers and have already donated two to the University of Azores. We’ve flirted with the idea of maybe tagging other commercially important species like dogfish. But we’re going to have 30 of these tags, and we really want to make this fleet available to other researchers with other scientific uses studying other species.”

“These tags do a great job of actually seeing how the animal’s behavior is being influenced by it’s external, surrounding environment,” adds Mr. Cones. “Seeing how it’s behaving under different light conditions, different temperatures, and hopefully soon how it’s behaving under different oxygen conditions. So for all of these reasons, it’s important to get these baseline data so we see how these organisms will respond to a change in environment with global climate change and ocean acidification.”

Testing in the field

Recently the team visited the Azores off Portugal to test the tags on larger, deeper diving species rather than the smaller, local squid they initially trialed them with.

“We planned to tag 5 to 10 vein squid, a much larger species,” comments Mr. Cones. “That was our next step for these tags, and that’s why I made a fleet of them earlier in the year. Although there is not an oxygen minimum layer in the Azores, we wanted to get the baseline data showing how these deep-diving squid behave under varying temperature, depth, and light intensity levels.” 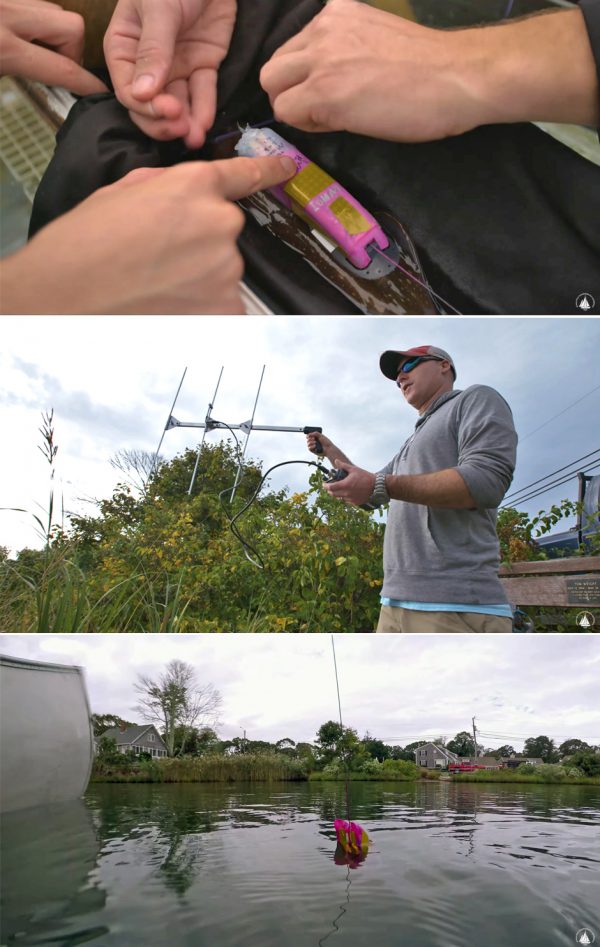 The team was limited to about six boat days by weather but ultimately tagged 11 squid, with all the tags returned.

“We got the first few tags back and then we felt pretty comfortable deploying multiple tags at once,” comments Mr. Cones. “At first we did several tag deployments in the morning and then just prayed that they popped back up the next day, targeting 24-hour deployments to get a full day/night cycle within the battery and radio beacon life of our tags.”

Compounding the complexity was the fact that the team wasn’t sure exactly where tags were going to start popping up.

“We were conservative in the beginning as to how long we were deploying them just in case we had to go miles and miles to find them,” remarks Mr. Cones. “But they actually all popped up within a few square kilometers. They had fairly high site fidelity which made retrieval easy.”

The team placed the tagged specimens in the water, and they immediately shot straight down to 300 or 350 meters.

“They didn’t like being isolated in a well-lit environment, that’s for sure,” states Mr. Cones. “Our thoughts were if they can make it, if they can survive the initial 10 to 15 minutes after tagging and reunite with their school at depth and return to that low light environment, they would fare very well because we had observed tagged and untagged animals in an aquarium. There were no tagging effects on the actual squid; they were swimming completely undisturbed, so that was exciting.”