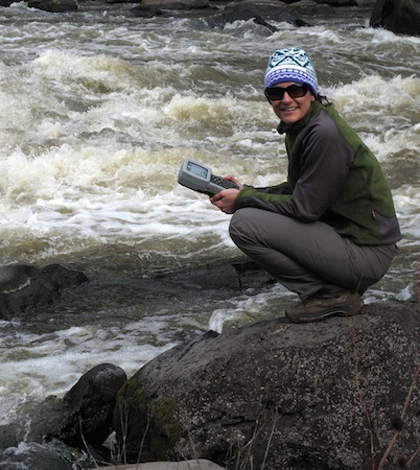 Compared to most coastal river systems, the Klamath River is upside down. It starts slow, wide and high in nutrients among farmlands of eastern Oregon. As it flows through northern California toward the Pacific, its basin narrows and turns mountainous, its bed steepens and its water quality improves.

A recently published study tracked water quality in the Klamath River as it followed its backward path. It’s among the first year-long records of how the river changes from season to season as it flows through farm fields, five reservoirs and forested canyons.

A plan to restore the system’s formerly prolific salmon runs seeks to remove dams on four of those reservoirs along the Upper Klamath River. The new study could serve as a baseline for understanding how future work affects nutrients and algae blooms that plague the river.

“The goal was to describe the conditions on a seasonal and longitudinal basis with the dams in place,” said Allison Oliver, study author and post-doctoral fellow at the University of Alberta. “It wasn’t to make predictions about dam removal or track how dams in and of themselves were causing algal blooms.”

Oliver, who conducted the research as a doctoral student at the University of California, Davis, collected monthly water samples at eight sites along the river from May 2010 to June 2011. Sampling in the winter sometimes got a little hairy, but it was important because there was otherwise very little data available on nutrients and water quality during that time of the year. The weather turned some three-hour drives between sampling sites into six-hour drives and made access a chore. Winter sampling was difficult but filled an important data gap

“Some of the sample sites are down a four-wheel-drive road that gets wet and turns into two feet deep of muck,” she said. “Then you have to climb out on icy rocks. It was pretty gnarly sometimes.

“A couple of them I did on crutches. That required some recruiting of additional help.”

“As you moved downstream from the headwaters, the reservoirs had a increasingly ameliorating effect on water quality,” she said. “They basically acted like processing units, consuming nutrients.”

But that wasn’t always the case, as each reservoir’s behavior changed throughout the year. In the high flows of winter, for example, some reservoirs appeared to add to the nutrient loads of downstream segments. Though the study doesn’t make any recommendations on restoring fish populations, Oliver said its a good segue to a closer look at how nutrients could fit in to restoration goals on the Klamath. Managers want to reintroduce salmon above the lowest dam, where water temperatures routinely stay warmer than the species prefers. Lowering temperatures is a common goal in the fish habitat restoration world of the West, but the Klamath has few cold water sources (springs, for example) to cool the river above the site of the lowest dam.

Instead, restoration managers could exert greater control on the system by looking to nutrients, which combine with high temperatures to create the eutrophication effects that are bad for fish.

“I think it’s important to show that in some places if you want to do successful fish restoration, you also need to focus on things beside temperature,” Oliver said.