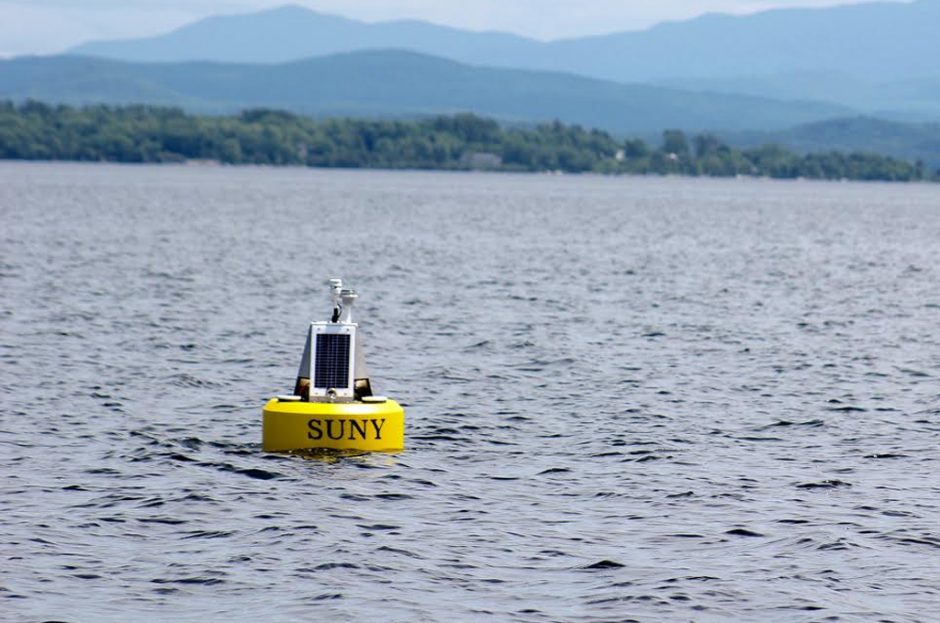 Since the 1990s, manual sampling trips on Lake Champlain have gathered data on its dynamics every few weeks. But the measurements they’ve gleaned are sparse when you consider faster-paced changes that the lake could see in a future of predicted climate upheaval.

To help fill that gap and meet a host of other needs, scientists at the State University of New York (SUNY) — Plattsburgh have deployed a new lake data buoy on the water body. It is only the second such monitoring platform launched in Lake Champlain, after another that logs in Missisquoi Bay.

The new cellular data buoy, sitting not far from Valcour Island, is providing previously unavailable data on the lake in real time. These are helping research and education at the university, while also helping to improve National Weather Service forecasts and making things a little safer for local fishermen.

“One of the things we’re looking at is whether or not the monitoring we’re doing on Lake Champlain is adequate enough to pick up climate change,” said Eric Leibensperger, assistant professor of environmental science at the university. “… Another aspect is that we don’t have that much open-lake buoy data. There was a buoy in Missisquoi Bay, but this one is in the main part.”

The location gives investigators a prime spot to track how its thermocline changes, which they’re doing with a NexSens TS210 thermistor string. It runs from the water’s surface all the way down to the sediments and is a whopping 50 meters long. Additional data on the water’s temperature, pH, dissolved oxygen and conductivity are gathered by a Eureka multi-probe. Leibensperger says that previous efforts to document Lake Champlain’s thermocline only reached from the sediments to 6 meters below the surface. And the data he shared with us showed in great detail the extreme fluctuations that the lake can experience thanks to wind and an active seiche.

“In a particularly windy storm, the thermocline can mix — right now it’s around 13 to 15 meters — but it fluctuates a lot, on the order of 20 to 30 meters,” said Leibensperger, comparing what’s going on now to the previous effort that relied on a marker buoy and the short thermistor string. “We have the weather measurements, so now we can relate those changes in wind speed to changes in the thermocline depth.”

Those wind speed and direction measurements are gathered by an Airmar 200WX weather station that also logs data on air temperature and barometric pressure. They are proving useful in helping an ongoing investigation at the university that’s looking to learn more about the dynamics of zooplankton movement.

The work has SUNY — Plattsburgh researchers going out periodically with plankton nets to sample above and below the thermocline.

“This is not my specialty, but they (zooplankton) move up and down to find food and hide from predators. We can look at the depth of the thermocline and relate it to those biological samples we’re extracting,” said Leibensperger. “The buoy is also close enough to our boathouse so we can take classes out.” In addition to those research and educational uses, measurements from the NexSens CB-450 lake data buoy are helping National Weather Service forecasters who previously didn’t have enough data on air temperatures, water temperatures and wind speed to calibrate their models. The improved forecasts mean that fishermen and boaters who go out on the water don’t have to wonder as much about the accuracy of weather estimates.

“I kind of see it as a win-win-win situation. We use it for research purposes as well as lake management. It helps the National Weather Service, but also aids public safety,” said Leibensperger. “Data are used a lot by local anglers. Local fishermen regularly visit our website to see conditions on the lake. We’ve had success in reaching a lot of different people.”

Measurements from the lake data buoy are available on Leibensperger’s university website. The portal showcases current conditions the buoy is reporting and features graphing tools that make it possible to view historical data.

The open accessibility is a step in the right direction, as it’s odd to hear that data are lacking on Lake Champlain. Despite being one of the more famous lakes in the United States, Leibensperger explains that the water body is in a tough spot.

“It’s kind of in that region where it’s well studied and not well studied at the same time,” said Leibensperger. “We could use a lot more data than we have.”

In the future, researchers are looking to upgrade the weather sensor to also gather data on solar radiation and humidity. Knowledge of those parameters could permit the development of an energy budget for the lake.