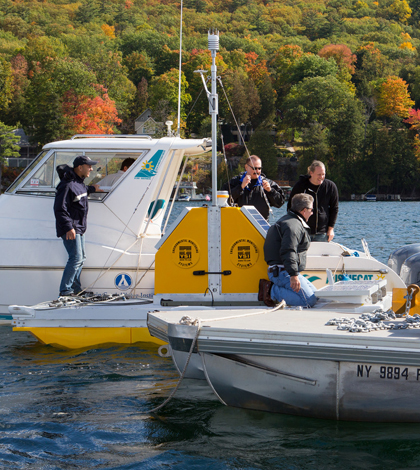 As part of IBM’s Smarter Planet initiative, the company has poured millions into projects around the world to test out some of its new technologies and has gotten some good clippings in the press along the way. One well-known offshoot of this effort is Watson, the computer that famously beat human opponents at Jeopardy.

But the initiative goes much farther than Watson, and some of the same engineers who worked on the supercomputer project have already turned their eyes to another one: the Jefferson Project, a joint effort between IBM, The FUND for Lake George and the Rensselaer Polytechnic Institute that is pushing the limits on lake monitoring.

“IBM, as part of their Smarter Planet effort to use cutting-edge tech, is using Lake George as a proving ground for their sensors,” said Rick Relyea, scientific lead of the Jefferson Project at RPI. “So we do have sensors from YSI (deployed), but on top of that, IBM uses its own computer boards to make them smarter.” Relyea says the modifications allow for some sensors to communicate with one another so that they notice when odd readings are coming in and adjust on their own. These tweaks are made throughout the day, as profilers use a winch to lower YSI water quality sondes up and down in the water column to take measurements of temperature, pH, dissolved oxygen, chlorophyll-a, chloride and conductivity.

Lake George was chosen for the project partly because Rensselaer Polytechnic Institute, which already partnered with IBM on Watson, is located nearby. The lake has an important role in supporting tourism to the Adirondack Mountains. But Lake George is also at a tipping point, and now is the time to take its pulse, Relyea says.

“It’s a lake that’s received inputs from runoff and has been impacted by invasive species, but it hasn’t gone too far,” said Relyea. It’s also got an interesting mix of problems to study, as nearly one full side of the lake is undeveloped, protected state land, while on the opposite shore lie resort towns like Lake George Village and Bolton Landing, as well as numerous resorts and residences. An early run at a circulation model of Lake George (Credit: IBM Research)

Relyea and other investigators will use all the tech to dissect those issues and turn them into models that can help future management efforts. Models will be built on Lake George’s circulation, runoff, food web and weather patterns. Some primitive modeling has already been done.

“We recognize that all the work is taking place on Lake George,” said Relyea. “But we all appreciate that what we’re doing is much more global in context. This tech – new tech — can be used on other lakes one day.”