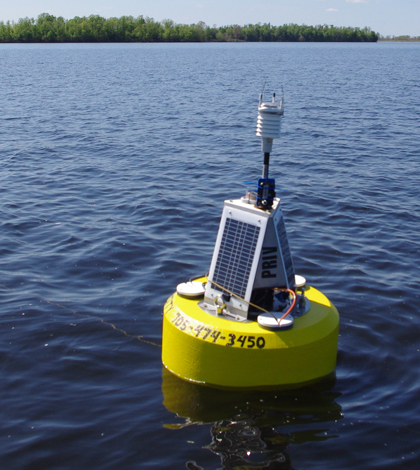 Sitting between the Ottawa River and Georgian Bay, Lake Nipissing is the third largest lake in Ontario. It’s packed full of islands and has shallow waters that make for numerous sandbars along a winding shoreline. The lake is a popular tourist draw, especially around Callander Bay, where boaters and swimmers come in the summer and anglers fish year-round. Despite that, the nutrients that support algae growth in the bay have been largely unstudied.

Researchers at the University of Saskatchewan and Nipissing University are trying to relieve that lack of knowledge with the help of two data buoys. One is deployed in the center of Callander Bay while the other is sitting between the Manitou Islands and the City of North Bay. Both platforms are sitting above 10 meters of water and equipped with water quality sondes, weather stations and temperature strings for tracking the lake’s stratification in a profile.

“These two sites represent distinctly different regions of the lake – that Manitou site represents the open water part of the lake, while Callander Bay is a relatively isolated embayment,” said Krystopher Chutko, assistant professor of geography and planning at U. of Saskatchewan. “… Several of the isolated bays surrounding Lake Nipissing (including Callander Bay) experience occasional cyanobacteria events, some of which can be toxic.”

The T-Node FR Thermistor Strings are important for keeping an eye on mixing events in the lake, Chutko says. Those can directly influence the availability of dissolved oxygen and nutrients.

The basic idea is that stratified bottom waters become anoxic during periods of stability. Phosphorus bound to sediments can become mobile in that period, Chutko says, serving as a nutrient source for cyanobacteria and potentially leading to Lake Nipissing algae blooms. “We use the T-Nodes to monitor the temperature profile at the sites at high frequency (every 10 minutes) so that we can identify the particular controls of mixing at those sites, such as wind and rain to model the potential influence on the presence of cyanobacteria,” said Chutko. “We use the Manitou site as a control location, while Callander Bay is our primary site.”

At each site, the scientists are seeking to collect the data needed to dissect overturning and mixing. But the data, gathered over the last couple years typically between late May and late October, have also been presented at research conferences, including the most recent meeting of the International Association for Great Lakes Research.

The buoy data are also posted online for public access, and Chutko says they’ve proven useful for educational programs as students have used them in presentations and theses. Many students likewise gain experience assembling and deploying the buoys.

Early analysis of the data are also revealing some of the dynamics affecting mixing and the likelihood of Lake Nipissing algae blooms.

“Although I wouldn’t call it surprising, we do see a strong relationship between the stability of the water column and what we are calling wind and/or rain ‘events.’ We identify these events and meteorological phenomena greater than one standard deviation above the norm,” said Chutko. “For instance, an extended period of above-normal winds are strongly related to periods of water column mixing, while periods of below-normal winds are related to stratification and stability. Similarly, heavy rainfall is related to mixing. It is likely these two parameters are correlated as well, since in central Ontario heavy rainfall is usually associated with convective storm systems, which typically come with high winds.”