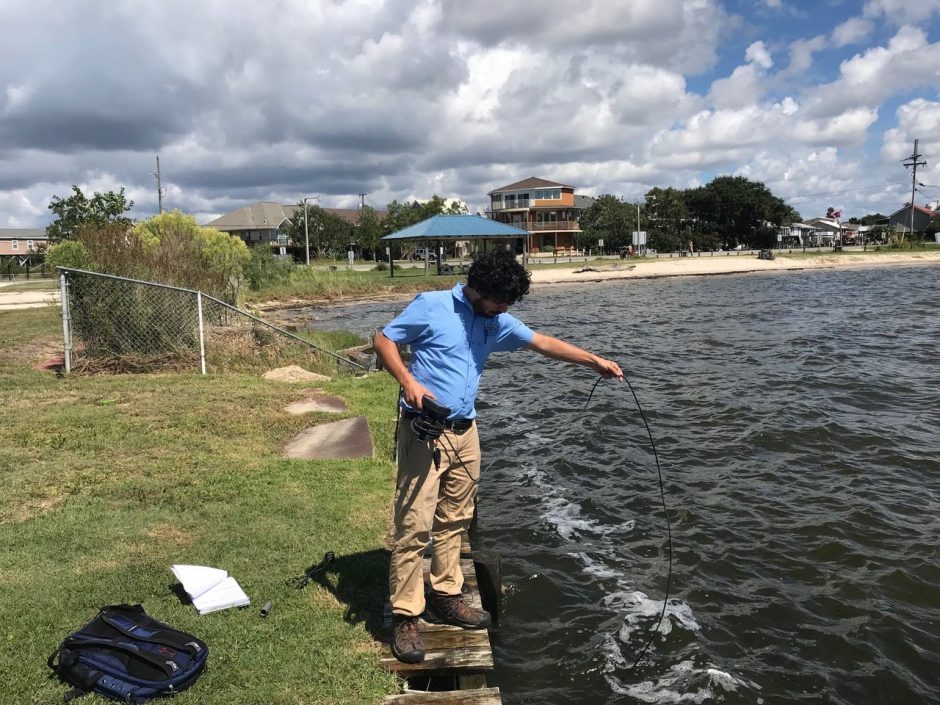 Located near New Orleans, Lake Pontchartrain is a 630-square-mile estuary open to the Gulf of Mexico. The lake drains 10,000 square miles of land. Because of its proximity to the Gulf, the lake is a mix of freshwater and seawater that is home to several species of aquatic life such as trout, redfish and crab.

“There is a tremendous amount of fishing in the lake, both recreationally and commercially,” said Brady Skaggs, Ph.D., the water quality program manager for the foundation.  “Some of the best crabs you can get in Maryland come out of Lake Pontchartrain.”

The foundation formed in the late 1980s when the water quality of the lake was adversely affected by silt stirring from the regular practice of dredging for clamshells.

“Our organization, also known as LPBF, started to champion stopping that activity,” said Skaggs. “Since then, the water quality of the lake has greatly restored because the silt is not continuously moved around.”

Over time, the LPBF evolved to tackle new issues ranging from the now-resolved wastewater discharge on the south side of the lake to the dead zone created by the Mississippi River Gulf. As recently as 2006, the lake was impaired for swimming and other recreational activities. However, the LPBF has helped with addressing factors leading to pollution and the lake was removed from Louisiana’s 303(d) list of impaired water bodies.

In the 1990s, according to Skaggs, the foundation, the Louisiana Department of Health and Hospitals and local academics from Tulane University and the University of New Orleans collaborated to model the long-term decay rate of the lake microorganisms.

To stay on top of any issues that may be adversely affecting the lake, LPBF’s staff, which includes microbiologists and biologists, collect weekly water quality data. The group uses YSI Pro2030 and YSI 85 handheld meters to monitor 10 regular sampling sites around the lake. The meters measure several water quality variables including dissolved oxygen, salinity, conductivity, barometric pressure and temperature.

The group also takes water samples for laboratory testing that shows fecal coliform and enterococci as microbial indicators of pollution. The LPBF is also interested in assessing new indicators, such as chlorophyll and coliphage. Chlorophyll concentrations are associated with the presence of algae in the water, while coliphage is a viral indicator of fecal material.

Residents can access the current week’s data on the foundation’s website along with a map of the 10 sampling sites (www.saveourlake.org). LPBF also shares the data with local news stations and newspapers. The information helps residents make decisions on accessing the lake for fishing, swimming and other activities.

Regular monitoring and a large collection of historical and current data have provided the foundation with a true insight into the lake’s natural state, making it easier to establish protocols. “Typically we see elevated rates after rain events,” said Skaggs. “Our standing advice to the public is that they not swim in the lake for three days after a rain event.”

Having such an in-depth knowledge of the lake’s ecological system and water quality levels also makes it easier to identify when something is wrong. In one instance in early 2017, a sampling point showed elevated results for a few consecutive months. Because this particular location had not shown elevated results historically, even when others did, the foundation knew that something in the area was amiss.

“We started to work in that watershed to trace the source and found that a pipe that traverses the bayou from the state park had broken,” said Skaggs.

Over time the group’s area of focus on the lake has shifted from the south shore to the north shore because of the rapid urbanization of St. Tammany parish after Hurricane Katrina. Though the parish saw a great deal of damage, it was still considered “higher ground” and somewhat safer than the lower parishes. As rebuilding took place the parish grew as many Louisiana residents sought a higher elevation.

“There’s been a lot of rapid development since 2005 on the north shore,” said Skaggs. “It’s almost a doubling of the population in a very short amount of time. In many ways, the infrastructure couldn’t keep pace with the rate of development.”

The lack of infrastructure included septic systems which can’t be used in the area due to the poor percolation rate of the soil. A normal septic system includes a septic tank that treats the organic matter and discharges it into a pipe system that leads to a drain field. The drain field is a shallow, covered area in the soil. The wastewater is naturally filtered through the soil. For it to work, the proper type of soil is required, preferably a sandy soil that this area of Louisiana doesn’t possess.

In lieu of a working septic system, the newly developed residential areas include miniaturized surge treatment systems at each home.  The homeowners are in charge of maintaining the systems. If the systems aren’t properly maintained, untreated wastewater can be released onto soil that is unable to naturally filter it, seep into the groundwater and eventually into the lake.

The possibility of the systems affecting water quality is a known risk. The systems appear on the Louisiana Department of Environmental Quality’s Water Quality Integrated Report. There just aren’t many alternatives available.

“We know from the citizens in the basin that water quality is a big concern. We are able to use citizen reports and evaluate the monitoring data to identify hot spots or potential problem areas,” said Skaggs. “The organization is very active in watershed improvement projects on the north shore right now.”

For this issue, the group is taking a proactive approach rather than reactive one.

“We are working very closely with the parish to provide advocacy and education on how to keep these systems in working order,” said Skaggs. “We do a door-to-door inspection program to check the systems, and help homeowners return non-working systems back to a functioning status. We provide inspection information to the parish.”

The education outreach, coupled with the regular sampling of the north shore area, helps keep the lake accessible.

“With a lot of groundwork and regularly assessing the waterways, we have been able to return the lake to recreation standards,” Skaggs said. “That’s a credit to our personnel, they are very easy to work with and talk to.”