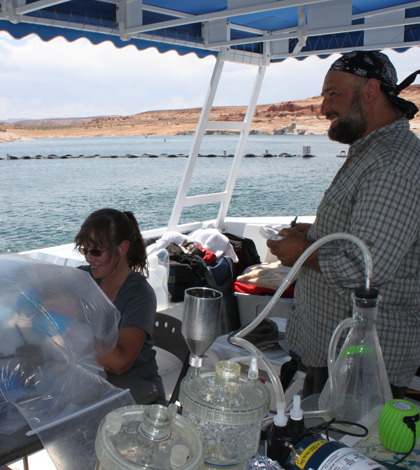 Lake Powell, the canyon-lined, serpentine reservoir that straddles the Utah-Arizona border, draws millions of visitors every year. Vacationers there often take to houseboats for a mellow week on the water amongst the red sandstone cliffs.

That never appealed much to David Naftz, a U.S. Geological Survey research hydrologist who lived in Utah before taking up a post with the agency’s Montana Science Center. But then duty called, in the form of a project to learn more about mercury contamination in the lower half of the 180-mile reservoir.

He and six USGS researchers from across the country — “A lot of the mercury gurus,” Naftz said — stayed 12 nights on 60-foot houseboat on the lake.

“It does sound fun, and it was a fun trip, but there were very long days,” Naftz said. Instead of racking up empties or launching day trips into one of the reservoir’s 90 side canyons, the scientists were collecting samples and working the mobile laboratory that occupied their vessel’s top deck.

“There were a few days of the trip where people were processing samples until two or three in the morning and then getting up at six to start over again,” Naftz said.

The trip came about when, after several years of collecting fish with high mercury levels in the southern half of the reservoir, Arizona and Utah issued consumption advisories for that section of the lake in late 2012. That elevated the mercury issue on the radar of the National Park Service, which operates the Glen Canyon National Recreation Area where the lake lies. High-mercury fish included endangered species, the protection of which is a management priority for the park service. The houseboat that served as mobile laboratory and crew quarters. (Credit: USGS)

So the USGS crew, along with another researcher from University of Montana, set off in late May this year to get a better handle on the mercury dynamics in the lake. That includes a look at potential sources and the chemical and biological processes driving the mercury contamination. They’re also looking at why the issue is much worse in the southern reservoir than in the northern half.

“Why is the mercury problem restricted geographically? That’s basically what the project is trying to address,” Naftz said.

Their work began on the north end of Lake Powell near where the Colorado River flows into the reservoir. They operated two boats: the “mud boat” dedicated to gathering samples of the bottom sediments, and another collecting water samples and gathering additional data with a YSI EXO2 multi-parameter water quality sonde.

The scientists were also running an instrument that continuously analyzed the air for mercury. That data could give an indication of the effects of nearby mercury sources, include coal-fired power plant near the Glen Canyon Dam at Lake Powell’s southern end. However, it seems more likely that the difference in mercury levels between the two ends of Lake Powell has more to do with what’s going on under the water. The thought is, Naftz said, that particulates cloud the water in the north end of the lake, but the sediment settles out as the water flows south. That clears the water and allows more sunlight to penetrate, fueling phytoplankton growth. Then the plankton die off, which facilitates microbial activity that converts mercury to methylmercury, the toxic form that accumulates in fish tissue.

“It just seems like the conditions for the methylation reaction are perhaps more important than having an actual point source in the watershed,” Naftz said.

The researchers were on the water during the spring high-flow season, and Naftz said that the signs of runoff faded and the water cleared as they moved closer to the dam. Now researchers are waiting to see how clearly the contrast shows up in the data.

In the meantime, they’re looking forward to a follow-up trip during the low-flow season in August 2015, even if being on the clock means tempering some enthusiasm over a Lake Powell houseboat adventure.

“The houseboat did have a water slide on it, but that was for emergency evacuations only,” Naftz said.