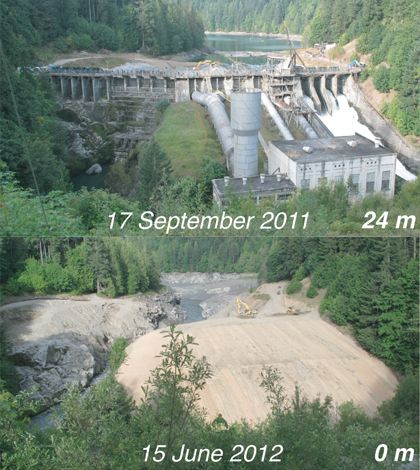 The habitat impacts of removing a dam are often as great as installing one — though not always in ways that are easy to predict. When the largest dam removal in U.S. history wrapped up at Washington’s Elwha River in 2014, it raised questions about the short- and long-term effects of such a huge undertaking.

Now, a series of studies by the U.S. Geological Survey, Reclamation, Lower Elwha Klallam Tribe, University of Washington and various state and federal agencies are providing answers and insight into the effects of dam removal. The five papers appear in the peer-reviewed journal Geomorphology.

The Elwha River Restoration Project targeted two dams for removal with the goal of reintroducing upstream access for spawning salmon. This project was largely ensured after Congress passed the Elwha Act in 1992, and baseline studies of the Elwha River and its coast were started soon afterward to help project what habitat changes might occur sans dam.

“What we saw in the Elwha River was basically a very cobbly river substrate — very poor for salmonids,” said Jonathan Warrick, a USGS research geologist and lead author of a paper tying the studies together. He helped design the coastal survey research plan for the USGS, from which spawned two major questions: “What’s going to happen to the fish? What’s going to happen to the sediment?”

Dams of all sizes alter their aquatic environment by trapping sediment, which tends to pool in reservoirs above the dams. Research teams working on the Elwha River Restoration Project understood that removing the dams would release massive amounts of sediment, but how much, exactly, was a subject of speculation. Understanding the fate of that sediment was among the studies’ primary objectives. “Sediment forms the basis of landforms and habitats, and those things are important because they provide homes for all the important critters that are out there,” Warrick said. “Down on the coast, sediment also provides important resilience against storms and coastal flooding.” He noted that sediment’s role as a buffer against erosion and potential sea level rise is also a point of interest for the USGS and other agencies with coastal jurisdictions.

To study where all that sediment went, the researchers used a combination of classic and modern survey techniques, including aerial and ground-based LIDAR, plane-based imaging and seafloor SONAR imaging to track offshore sediment movement. They coupled that with old-fashioned water sampling of the Elwha River, plus some ecological and biological analyses of local fish.

Within two years of the dam’s removal, researchers found themselves shocked by the sheer amount of sediment that eroded into the river. Ten million cubic meters, enough to fill about 1,000 Olympic swimming pools or three or four football stadiums — “Depending on which pro team you’d like to bury in dirt,” Warrick quipped — flowed through over 20 kilometers of the Elwha River from the upper dam to the coast.

“It was pretty amazing,” Warrick said. “There were lot of excited phone calls and emails saying, ‘Is this true? Are we really seeing 10 million cubic meters?’”

The released sediment has influenced processes that create and maintain habitat for salmonids and other species. Sand and gravel has already returned to the river below the old dam sites, Warrick said. And with the dams gone, salmon are now free to spawn upstream in Olympic National Park.

Warrick chalks up the success of the Elwha River Restoration Project to the collaboration of the myriad entities involved. He lauded the involvement of the U.S. Environmental Protection Agency, who funded much of the coastal monitoring project. “Our work wouldn’t have happened without them,” he said.

Although the lion’s share of the work is over, Warrick said researchers will continue to monitor the long-term effects of the dam removal. Sediment is still moving downstream at a high rate, and the delta at the Elwha’s mouth continues to expand considerably.