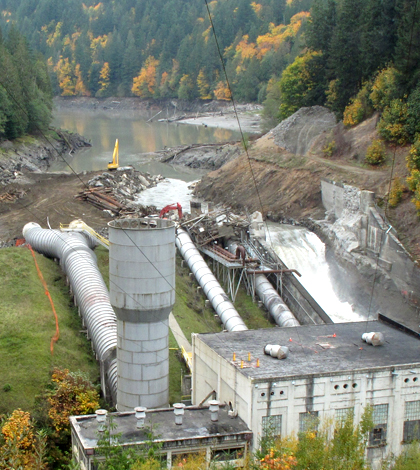 The largest dam removal in history is underway on the Elwha River in Washington, where deconstruction has freed a massive amount of sediment that had built up over the past 80 years in two now-drained reservoirs. A recent study from federal scientists gives an early look at the downstream effects of the sediment release, which has transformed the channel in ways that may not be settled for decades.

The 108-foot Elwha Dam came down in 2012, and the 210-foot Glines Canyon Dam seven miles upstream is halfway there, opening up 70 miles of the river and its tributaries to migrating salmon for the first time in a century. The height of the dams make them the largest ever removed, but the projected release of up to 13 million cubic meters of sediment is also a record.

“It’s by far the biggest dam removal project in terms of the amount of sediment stored in the reservoirs,” said Amy Draut, a research geologist with the U.S. Geological Survey’s Pacific Coastal and Marine Science Center.

The removals restored the connection between the ocean and river habitats, bringing benefits for both. One of those is benefits is additional salmon spawning ground, a habitat that depends on the natural flow of sediment. The sediment-trapping reservoirs deprived the lower sections of finer silt, sand and gravel, leaving the riverbed downstream of the dams artificially coarse.

“These fish need a really specific grain size to use as spawning gravels.” Draut said. “The size of the cobbles that we were seeing on much of the river bed below Elwha Dam were too coarse for fish to move around with their tails and build nests in.”

With one dam gone and the other nearly so, four federal agencies and the Lower Elwha Klallam Tribe are conducting an intensive study of how the incoming sediment is affecting the channel and floodplain. The work includes sophisticated data from land surveys and terrestrial Lidar that scientists are still analyzing. Results of those studies will be published over the coming year. In the meantime, Draut and Andy Ritchie, a hydrologist with Olympic National Park, have authored a preliminary study, recently published in the journal River Research and Applications.

The study was low hanging fruit, Draut said, forgoing complicated equipment like Lidar and relying instead on trowels and notebooks.

In March 2013, the researchers picked out 18 sediment deposits between Glines Canyon Dam and the ocean and used shovels to expose vertical profiles, describing what they saw and collecting samples for lab analysis of grain size and organic content. Prior to removal, modeling work had projected that the undammed river would carry fine mud from the reservoirs all the way to the ocean without depositing any in the channel. But Draut’s work shows that wasn’t the case: Mud made up an average of 20 percent of each deposit they sampled.

In some places the additional material has built up the river bed, forcing the water to spread out from the former channel.

“Even now at non-flood stage the river uses a lot of its floodplain area,” Draut said. “We saw places where the river channel is flowing through trees now, depositing huge amounts of gray, goopy sand and mud.” The same site as above photographed in 2012 after removal (Credit: Amy Draut)

Draut said the models that predicted the mud would pass weren’t designed to paint a clear picture of what would deposit along every inch of the river, but rather give a general idea of what would happen across the river as a whole. And the fact remains that the majority of the mud has passed to the ocean.

The mud that hasn’t passed through may be there as a result of uncharacteristically low flows during the two winter flood seasons that have passed since removal.

“If we got a big flood this winter, if we got a five-year flood or even a 10-year food– or heck, even a two-year flood–the river channel could look completely different than it does now,” Draut said. “We might see a lot of erosion of the new deposits in the river. We might even see erosion and new deposition. It’s pretty hard to predict.”

Meanwhile, the ecological benefits of the project are also emerging. Salmon have been spotted swimming upstream of the former dams and building nests below the former site of the Elwha Dam where the cobble was once too coarse.

In addition to building more habitat for salmon, the sediment also makes it easier to feel the presence of other wildlife in the watershed, Draut said.

“When we walk around in our field areas now, you see lots of animal tracks. ‘There were beavers here last night. And there’s a mountain lion print,'” Draut said. “It leaves a really different impression on you to walk around in a place like that than it did before they took the dams out.”