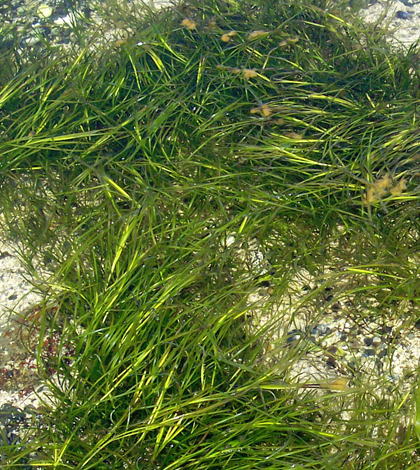 Rhode Island’s Little Narragansett Bay was once teeming with eelgrass prior to the 1930s. But wasting disease decimated eelgrass beds after that time, causing a 90 percent decline. And a series of hurricanes throughout following decades further thwarted eelgrass recovery.

The seagrasses are vital for all of the ecosystem services they provide. These include serving as nursery habitat for many juvenile fish and as a refuge for bay scallops that attach to eelgrass to avoid predators. The grasses also dampen wave energy and help to reduce shoreline erosion.

Nowadays, the health of eelgrass beds is still a concern, underscored largely by water quality issues caused by nutrient runoff flowing in from the Pawcatuck River and other waterways. Cleaner water generally means healthier eelgrass beds because those conditions best support underwater photosynthesis.

To keep tabs on the status of eelgrass in the bay, researchers with the state’s Eelgrass Mapping Task Force survey the extent of the seagrasses every few years. The task force is comprised of a number of organizations, including the Coastal Resource Management Council, Save the Bay and the University of Rhode Island, among others.

This summer, their efforts were helped by an airborne photogrammetric digital camera that imaged all parts of the shallow bay, with max depths around 8 feet. Using an underwater video camera and a handheld computer set up for GIS mapping, the investigators are currently working to verify where the eelgrass beds really are.

“It’s a continuation of some of our efforts in the past. We want to get an idea of where eelgrass is surviving in the bay and the coastal ponds of Rhode Island,” said Dave Prescott, south county coastkeeper with Save the Bay. “And the reason is that we really want to protect this really valuable habitat, this very important underwater habitat that provides a lot of ecosystem services we want to preserve.”

He and Mike Bradley, a research associate with the university’s Environmental Data Center, were recently out on the bay surveying its eelgrass. Their aim was to nail down where beds exist in comparison to the planimetric photographs. Bradley, who also helped with the 2012 assessment of eelgrass in the bay, analyzed the digital four-band images gathered from the sky and used them to create polygon segments where he predicted seagrasses would be.

“Where these flights occur, the conditions have to be perfect,” said Prescott. The Coastal Resources Management Council (CRMC) funded the airborne effort, which wrapped up in late June. “It can’t be cloudy or have whipped-up sediments in the water. You have to have the right conditions to get these photos.”

Bradley and Prescott boated to the regions using a GIS map as a guide. To confirm the presence of eelgrass, they dropped a SeaViewer underwater video camera.

“We use a GPS device that utilizes GIS data layers. The device enables us to overlay our position with the mapped polygons of eelgrass,” said Bradley. “We then drop the underwater video camera to double check the edges of the polygon.”

The ground-truthing portion of the work began in August, says Prescott, and is still ongoing. Because of that, there aren’t many findings to report.

“We don’t have all of the data yet, but Mike has had a lot of time on the water. One thing though, in Little Narragansett Bay, there is an issue where some of the areas where we thought were eelgrass are macroalgae,” said Prescott. “… That’s something we know. And one of the areas where we had eelgrass beds, they’re no longer there because of the macroalgae. That’s connected to nutrient issues in the Pawcatuck River … We have a lot of nutrients coming down.”

More results are yet to be determined, but hopes are to wrap up this survey of the bay’s eelgrass beds by the time that water temperatures get cooler in the fall. When those drop, the seagrasses die back, Prescott says.

“We are anxious to see this year’s results because it will give us more data in order to better determine overall trends of eelgrass in Rhode Island coastal waters,” said Bradley. “This will be the third year with basically the same methodology. The other years were 2006 and 2012.”

After that, another eelgrass survey incorporating an underwater video camera and aerial photography will likely take place in a few years.

“People often ask why we aren’t doing this every single year … but this isn’t a project that can be done every year,” said Prescott, noting around $100,000 in habitat restoration funding for the 2016 project provided through the CRMC. There is substantial expense, clearly, but it’s also worth noting that eelgrass beds’ extent are unlikely to change much over the course of one year. “We really are trying to look at trends to see how the system is doing. And where we have water quality improvements, we hope to see where there’s expansion of eelgrass beds.”