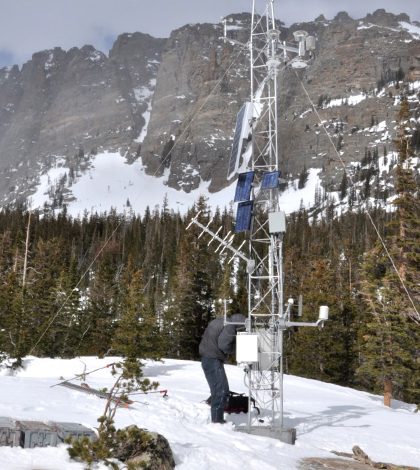 Puzzlingly high aquatic nitrate concentrations in the Loch Vale watershed high in Rocky Mountain National Park are closely linked to the amount of nitrogen settling in from the atmosphere, according to a recent study. Both atmospheric and stream nitrogen appear to be on the way down.

“What that means is there’s a pretty immediate response to changes in deposition,” said Alisa Mast, research hydrologist with the U.S. Geological Survey and lead author of the study. That’s good for streams because policy or management efforts to lower nitrogen emissions could quickly benefit water quality.

Streams flowing high in the Front Range of the Rocky Mountains have carried surprisingly high nitrate levels given that their watersheds are covered in little more than forests, talus and tundra.

“The streams have pretty high concentration of nitrate for an alpine watershed where there’s no land use,” Mast said. “There’s concern that it’s altering some components of the ecosystem like diatom assemblages in lakes.”

Scientist have speculated at causes behind the elevated nitrate, including atmospheric deposition, changes in forests brought on by mountain pine beetle infestation, and climate-induced effects of melting glacial ice and thawing tundra. In an effort to better understand what controls the amount of nitrate flowing out of the Loch Vale watershed, Mast and her colleagues analyzed nearly 30 years of data on water chemistry, streamflow, precipitation and nitrogen deposition collected there. The results were recently published in the journal Environmental Science and Technology. Loch Vale itself is a small subalpine lake in Rocky Mountain National Park, and its basin is likely among the most-studied high-elevation watersheds, thanks in part to the work of Jill Baron, a research ecologist with the USGS and co-author of the study. Formerly with the National Park Service, Baron set up stream gauges and began routine, year-round water sampling in the watershed in the early ’80s, which continues today. She also helped establish a National Atmospheric Deposition Program site there, which was rare for that part of the country.

“At that time there were relatively few in the Rocky Mountain region, and in the western U.S. in general,” Mast said. “It’s pretty unique to have a station in such a remote area.”

But the data from the NADP site had previously led to some confusion over just what was going on in the watershed. Water chemistry data from the streams had shown nitrate levels climb throughout the ’90s and peak in the 2000s before declining. The NADP nitrogen deposition data showed a similar trend through the 90s and 2000s, except it didn’t show the same decline in recent years.

“We observed the trends in the stream and were kind of perplexed by it for a while,” Mast said. “Deposition is flat. Why is the stream going down?”

That trend was an issue with measuring precipitation at high elevations, where winter winds blow snow horizontally and cut down on gauge efficiency. By pulling in other deposition and precipitation data and performing a careful review of the data, Mast corrected the NADP data to show that deposition rates had also declined, helping to confirm the link between atmospheric nitrogen and stream nitrate levels. That decline in nitrogen deposition has occurred at the same time as a nationwide decline in nitrogen oxide emissions as power plants switch from coal to natural gas. As the authors wrote in the study, “This transition is ongoing in Colorado, especially in the Front Range metropolitan area, which is the major source of (nitrogen) emissions to (Loch Vale).”

The effects of the metro area’s nitrogen emissions on the ecosystems in the national park led to the Rocky Mountain National Park Initiative, a 2007 agreement between the National Park Service, U.S. EPA and the state to reduce nitrogen deposition in the park by 2035.

“Our results,” the authors wrote, “suggest that reductions in (nitrogen) emissions and deposition on a regional scale should result in fairly immediate declines in stream nitrate concentrations in (Loch Vale) and in other high-elevation watersheds in the Colorado Front Range.”