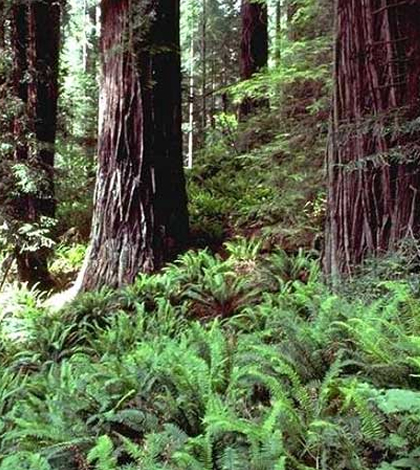 The effects of drought on California’s majestic redwood forests have gotten plenty of attention in recent years. But few studies have considered the impacts to plants that live in their shade, like grasses and ferns that populate the forest understory.

Though they’re not as big or noticeable as the giant redwoods that tower over them, these small plants still play significant ecological roles and should be protected with that in mind. After all, their presence alone helps to keep out invasive plants that could be highly detrimental to the forest ecosystems if they worked their way in.

Scientists at the University of California, Santa Cruz, are lucky to have a redwood forest on their campus and in many ways understand the importance of redwood ferns to the forests better than researchers elsewhere. But they still know relatively little when compared to their knowledge of redwood trees.

To begin the process of filling this gap in understanding, the UC Santa Cruz researchers embarked on a study of two species of redwood ferns that live in the campus’ redwood forest. These include the western swordfern and the coastal woodfern, both abundant perennials that can be studied year round.

“I started researching basic fern physiology about five years ago and I realized there was a gap in our understanding of the plants’ evolution. A big part was in seedless flora,” said Jarmila Pittermann, associate professor of ecology and evolutionary biology at the university. “As we started studying ferns, we realized that we didn’t know anything about their anatomy beyond the fronds.”

That set up a chase for knowledge about the two fern species that would stretch throughout 2013 and 2014, with Pittermann and other researchers in her lab going out every 10 days to grab samples and take measurements.

These involved using a porometer to measure the transpiration coming off leaves of the ferns, a metric that helped scientists to know when the plants were photosynthesizing. The porometers would be clipped onto transpiring fern leaves and take measures of stomatal conductance, a figure commonly used in the agricultural community.

Scientists used pressure chambers to measure the stem water potential of the ferns. These work by compressing fern fronds until water comes out, at which point researchers know the plant’s hydration status. “We measured soil moisture with a standard Campbell Scientific soil moisture probe, light levels, air temperature, humidity and we also measured the flow of water through a frond,” said Pittermann. “That involves taking a field sample, cutting the frond and then measuring the rates of water that flow through…That’s not something that most people do. It’s very tedious in the lab. But we did that to learn more about the physiology of the plants.”

All of those methods taken together helped to reveal some interesting findings about the resiliency of redwood ferns. Pittermann and others found that the fronds of the ferns can bounce back remarkably quickly after long periods of drought, only needing about 24 hours to restore their water-transporting abilities.

But the long-term exposure to dry conditions may set up a negative trend for fern growth in the future, researchers found. This is because the plants may be unable to develop as many leaves in the following seasons as they once did, and they may very well be more vulnerable to diseases and attacking insects.

“In some ways, we were surprised but also concerned. Given the vascular structures of the plants, they don’t completely shut down and die. What’s disturbing is that the plants are becoming more stressed,” said Pittermann. She believes that the ferns may be depleting their carbon reserves during dry periods, which could make it harder for them to make compounds important for protecting them from ailments when conditions improve. “What we’re seeing is a lot of insect infestation. It’s not unlike with humans — for example, maybe you’re working nonstop, sleeping five hours a night through the week and then you catch a cold on Sunday night.”

So what are the implications of these results? Pittermann says that they show just how important it is to consider the plants that are living in forest understories.

And in the case of redwood ferns, the plants may very well be harbingers of things to come. There is evidence that such long-term stressors as drought, and broader climate changes, could change the characteristics of forest understories completely.

“The long-term consequences will be profound with the potential replacement of the understory with invasive taxa and shrubs,” said Pittermann. “In the absence of ferns and the shading produced by the canopy, other taxa can establish themselves. Ferns can shade out other taxa, but when more space opens up, typically invasives slide into that niche.”

In future research, Pittermann would like to learn more about ferns’ reproductive capacity as well as more about how they function within forests on a larger scale. “There are no easy answers, but we’re trying to understand how this simple system (redwood forest) works,” said Pittermann.

Full results of the redwood fern research are published in the journal New Phytologist. Funding was provided by the National Science Foundation.