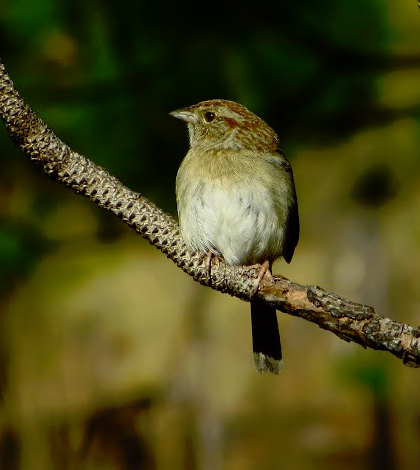 Every organism, from human to hawk to hedgehog, has specialized traits that make it most suitable for one habitat or another. Some species are fine-tuned for living in particular types of habitats that may only occur across one narrow swath in the whole world. For these species, a lost acre of habitat is one less buffer between them and endangerment. The Bachman’s sparrow nests only in stands of longleaf pine, a tree that once grew all across the American Southeast. Today, the fire-dependent longleaf pine mostly grows in confined patches, surrounded by private development or farmland. A new study from North Carolina State University suggests that isolated stands of longleaf pine aren’t enough to support these sparrows — connectivity to larger forests is key to predicting their presence.

“It’s kind of an elusive species,” said Paul Taillie, a doctoral student at NCSU who conducted the study as a master’s student. “The best time to detect it is in the spring, when they’re singing. But outside of that, they’re pretty hard to come by. They’re a tough species to study.”

Despite the Bachman sparrow’s limited range, Taillie said the species isn’t federally listed as endangered, or even threatened. Instead, it’s been designated as a Category 2 species, indicating that not enough is known about the sparrow to determine its threat level. Bachman’s sparrows spend most of their time close to the ground under cover of wiregrass and other fire-maintained herbaceous vegetation. (Courtesy Paul Taillie)

While the Bachman’s sparrow prefers recently burned patches of longleaf pine and wiregrass savannas, one theory suggests that the species’ range expanded in the early 20th century following the abandonment of agricultural land across the midwest. The fallow fields provided suitable habitat for the sparrow to disperse westward. When the agricultural land was worked once again, many sparrow populations were cut off and isolated, and the species’ range reverted to a narrow stretch of the southeast.

“Since the habitat is so ephemeral, they have this mosaic of habitat at all different stages,” Taillie said. “They’re all sort of blinking in and out.”

Taillie and his co-authors, M. Nils Peterson and Christopher Moorman of NCSU, wanted to determine what factors influenced the distribution of the Bachman’s sparrow. Using GIS tools, Taillie selected more than 100 sites for assessment on private and public lands in North Carolina.

“Pretty much all the properties were off the road, so we were navigating there with a map and a GPS,” Taillie said. “It was a lot of walking.” The open canopy of a well-managed longleaf pine stands allows sunlight to reach the ground and support a diverse community of herbaceous plants. (Courtesy Paul Taillie)

Some of that walking was through thorn thickets and nearly impassable tangles of brush, particularly on private lands where controlled burns are harder to coordinate. Taillie said traversing between sites was the hardest part of the study. So difficult, in fact, that 5 percent of the sites were relocated, and another 5 percent were dropped altogether.

Once the researchers arrived at each site, they collected various vegetation measurements and listened and watched for the sparrows for about five minutes — “Mostly listening,” Taillie said. “You don’t see them very often.”

The study revealed that healthy sparrow populations were most common in longleaf pine patches connected to larger forests. Most of these patches were found on well-maintained public lands that were treated with prescribed burns. The researchers observed very few Bachman’s sparrows on private lands, likely due to lack of resources available for private landowners interested in prescribed burns.

Taillie pointed out that his study addresses sparrows “from the North Carolina perspective,” which is at the northern extent of the birds’ range. Their habitat conditions may vary toward the core of their range, including Georgia, Alabama and northern Florida. But in North Carolina, at least, the researchers are confident in their recommendations:

“More places need to burn,” Taillie said. “Prescribed fire, in this part of the country, has been shown to benefit a whole suite of species” and should be made “more logistically feasible for private landowners.”

“Really, involving private landowners is the key,” he said.