So what can MAIC’s three-foot prototype buoy offer that others can’t? It’s easy to clean and costs very little.

“One of the big issues for putting anything in the water is biofouling,” said Josh Girgis, an engineer at MAIC based at the University of Maine’s Darling Marine Center (DMC). “If you put a sensor in, you can only expect it to work until something starts growing on it.”

For larger commercial operations, it can be tricky to clean all the bells and whistles that accompany larger equipment. That’s why manufacturers use UV light to kill algae or pumps that cycle water through the system. But all of that requires power, a luxury that small, low-cost autonomous data buoys don’t have. This is why Girgis and the team of researchers opted for a simpler solution – scrubbing a sponge on the buoy’s sensors.

Minimal maintenance is among the chief factors that Girgis and Chris Davis, who oversees the Maine Aquaculture Innovation Center, are prioritizing in the creation of their buoy. That’s because their future customers won’t be governments or research scientists – but Maine’s oyster and seaweed farmers.

“Our center’s goal is to develop low cost buoys with real-time data collection abilities,” Davis said. “Our target is to create and sell one for about $2,000.”

From Maine to Florida and from Texas to Washington State, aquaculture farming dots much of the coastal landscape surrounding the states. These shoreline farmers harvest an array of shellfish, including oysters, mussels, clams, and scallops. 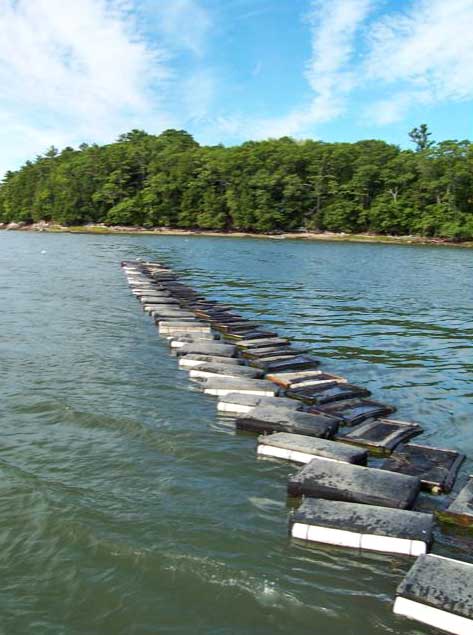 A standard oyster farm in Maine. It can take between one and three years for a farmer to grow a marketable product customers will purchase. This makes early decisions made by farmers in site selection very important. (Photo credit: Chris Davis)

In Maine alone, shellfish farming is a $20 million industry. Some mom and pop farms might grow 50,000 oysters a year, while commercial operations will yield multiple millions during harvest. But like their landfarming cousins, aquaculture farmers rely on successful harvests to turn a profit. And a profitable season might not arrive until years after getting into the industry.

For farmers targeting the right location and time to plant their oysters, it helps to rely on the data. Click To Tweet

“To do that, you need to develop growth models using environmental controls that regulate how fast shellfish grow,” Davis said. Of the myriad of variables to consider when farming, Davis, an aquaculture farmer himself, says that temperature, salinity (as measured by conductivity), and the amount of food are primary factors. 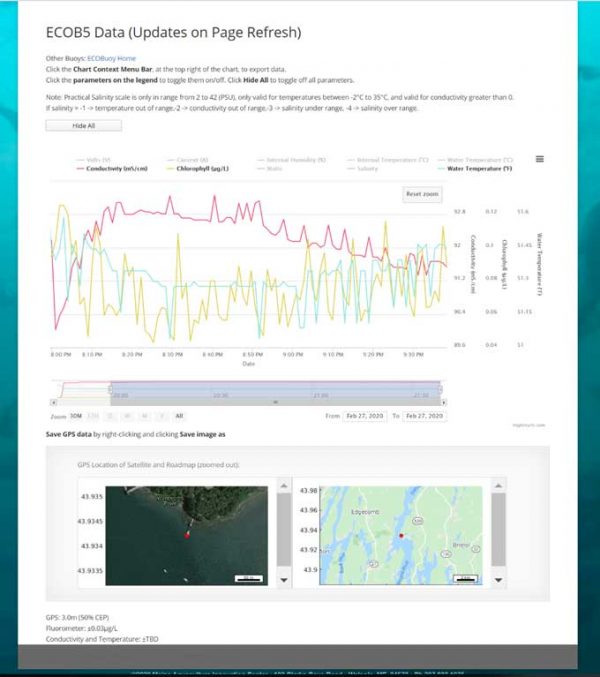 The online interface farmers will eventually look at when analyzing data collected from buoys in their farms. (Photo credit: Maine Aquaculture Innovation Center)

“Getting that information is expensive and you need a year’s worth of data to drive the growth model at the location you pick to farm,” he added.

Much like how agriculture is driven by sunlight, water, and the nutrient makeup of the soil, aquaculture farming for oysters relies on water temperatures in the high 60’s and low 70’s range to regulate metabolism, an abundance of chlorophyll from phytoplankton and algae to filter feed on, and enough salinity.

“Coupled with those three factors, you could plot them all on a time series chart and say ‘okay, historical trends match this year or next year and allows the farmer to make decisions about what they can do and when,” said Girgis.

Even before marketable oysters are grown, it can take years to acquire a permit for an aquaculture farm. If the salinity is too low or temperatures are too high or low, farmers risk wasting years before ever turning a profit.

Another oyster farm out of Maine. When farmers received their seeds, they’re no bigger than a grain of sand. By the time oysters and mussels are fully grown, they’ll have been moved to nets hanging down from buoys where they filter feed. (Photo credit: Chris Davis)

However, the year-to-year variability of temperature, conductivity, and food doesn’t change much. Measurements taken at one site will likely be reliable for decision making in the future. That means as long as farmers have the data, they know what to expect.

“Knowing water temperatures for a site from year to year can help just in managing for the farmer,” Davis said. “When do you overwinter your crop? How do you control the density of your shellfish? Of the water temperature? There are ways to use the data to better manage the farm.”

The buoy that Davis and Girgis want to use would take measurements of all three parameters every quarter-hour, half-hour, or hour, depending on the farmer’s preference, and wirelessly transmit it to a website or one’s cell phone. The data would be communicated from a cellular modem.

The makeup of the buoy prototypes is essentially a combination of circuit boards contained within the buoy’s hull. Wires connect the circuit boards to probes that protrude from the bottom on an external plate. 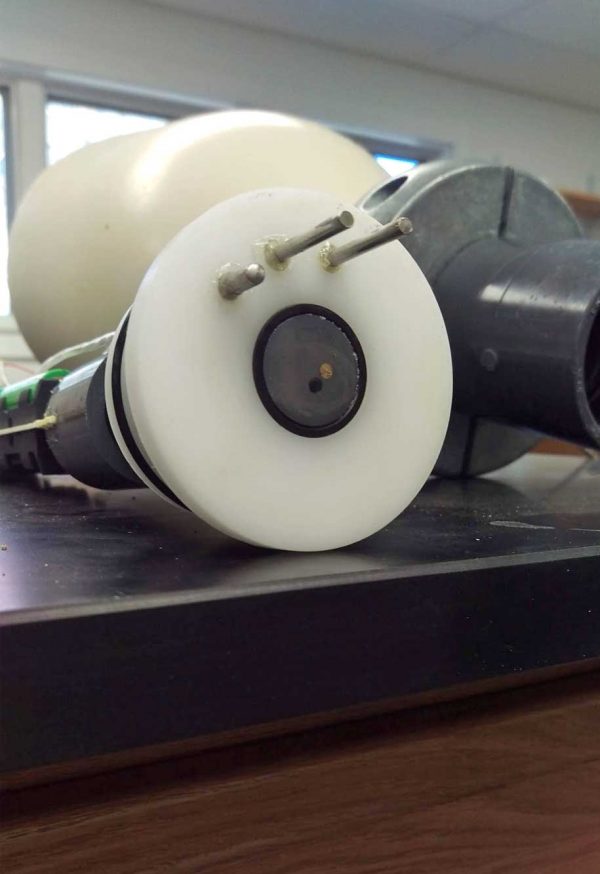 “You have to figure out how to make all that watertight as it’s mostly circuit boards inside the hull,” Girgis said.

In the first four prototypes, the team used a combination of commercial and custom-made parts to build the buoys, which helped keep the cost down. Temperature is measured by a precision thermistor built from a combination of the market and modifications from Girgis.

A working model ready for release is still months away as physically fitting modified sensors takes time. However, researchers at the Darling Marine Center envision a future where they could be leased to farmers on an annual basis and the data they collect available to the public.