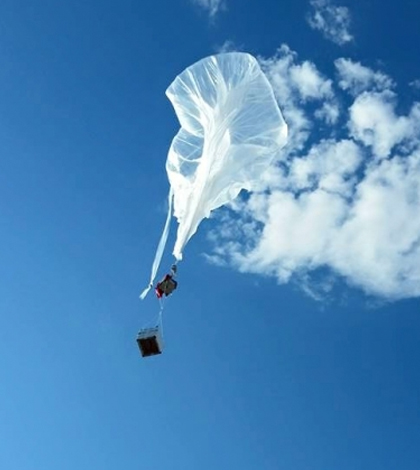 A large plastic research balloon launched by the Montana Space Grant goes up into the sky. (Credit: Berk Knighton / BOREALIS)

Following the test launch of a weather balloon to get ready for a nationwide project to study the upcoming 2017 solar eclipse, officials at the Montana Space Grant Consortium learned that what goes up doesn’t always come down. Sometimes, what goes up stays airborne for 32 hours and travels more than 1,100 miles before crash landing on an island in Lake Winnipeg.

Berk Knighton, flight director at the space grant, says that the test balloon launch began like many others have. But there was one exception, as the satellite modem typically used was swapped out for a newer model shortly before launch from Big Timber, Montana. The change shifted things just enough that a razor blade configured to cut the line that would bring the balloon down didn’t go through its intended slot, and got stuck instead.

“It’s a very simple device. It’s a DC motor like you’d use on a hobby plane. On the shaft, we mount a fabric-cutter wheel,” said Knighton. “When that motor spins, the blade is designed to go through the housing to cut the line that connects the top of the parachute to the bottom of the balloon. The DC motor had shifted in position within the housing, it hit the side of the housing and didn’t go through the groove.”

The weather balloon was also carrying a raspberry pi controller, 5.8 gigahertz modem and a camera for sending back live video. Knighton says this gear is being used to work on long-range video transmission capabilities that will be employed during the upcoming nationwide eclipse tracking event. There was also a GPS tracker and an Iridium satellite modem for receiving commands. “Like for the line termination which didn’t happen,” Knighton joked. That malfunction, which occurred around four hours after the initial morning launch, was the beginning of a busy and demanding 32 hours for Knighton.

“By about 12:30 (p.m.), we realized that all the systems we had to possibly terminate the flight weren’t going to work,” said Knighton. “Then I called the folks in Salt Lake.” That’s where a Federal Aviation Administration outpost is located, Knighton says, and he let officials know that the balloon was “derelict” — that there was no way of bringing it down.

The balloon continued to float around and the Montana Space Grant crew was able to track it through the rest of that afternoon. Around 8 or 9 that evening, the platform was making circles above Missoula, Montana, and there was hope that the sunset could lead to cooler temperatures that might help bring it down. But there was no such luck.

“We got a little excited. Then, around midnight, it looked like it was leveling off. And my worst fear came true,” said Knighton. “Sometime around 1 a.m., our communications system went out.”

Knighton says that the system’s battery was designed to run for eight hours, so the fact that the balloon kept communicating for around 16 hours was impressive. Luckily, it transmitted long enough to tip him off that it would soon enter Canadian airspace. Knighton called officials with Transport Canada Civil Aviation in Edmonton, Alberta, to let them know where the balloon was headed and then went home to get some sleep.

“(That night) I got a text alert that one of the little backpack transmitters had started replying again, for just under an hour, but it was enough for four points,” said Knighton. “I saw that it was just north of Regina, Saskatchewan.”

The next day, he was getting ready to contact Canadian authorities in Edmonton again to give them an update on where the weather balloon might be floating. But he checked the Space Grant’s tracking website first. There were two trackable devices onboard. “The second one reported it was right in Lake Winnipeg. These devices have little accelerometers in them,” said Knighton. “It must’ve gotten hit (when it landed). I think it had gone into deep sleep and then got woken up.”

By referring to satellite images, Knighton says he could tell that it had landed on Nut Island in the middle of Lake Winnipeg. The question, then, was how to go about retrieving it. Thankfully, some contacts at Google were there to help. Knighton says they helped by talking through different dynamics and were key for connecting him with people in Manitoba who would later help him find places to stay the night and charter a boat.

Once he got to the lake, it took about two hours to cross the water and reach Nut Island, where the balloon was draped around the branches of a cottonwood tree.

“The fact that I recovered the balloon and could do detective work to see what did or did not work, I consider to be like the MasterCard commercial,” Knighton said. “You know — priceless.”

Some of that detective work included reviewing video footage stored on memory cards. Knighton says one of the cameras onboard was aimed upward to record the balloon, so he was able to rule out any extreme twisting or things like that. And just being able to take a broad look at how everything was still attached was valuable.

All of those findings will be useful in making the 2017 nationwide solar eclipse monitoring project a success, Knighton says. He and others will be able to leverage them in helping students at more than 50 schools who have signed up to participate.

“Having a mistake happen is a really valuable lesson for us because we generally think of our group to be reasonably experienced. It’s eye-opening and good, and makes us rethink how to replicate our termination system so these things don’t happen during the eclipse,” said Knighton. “In summary, we learn more from our mistakes than our successes. That’s the most important lesson here.”