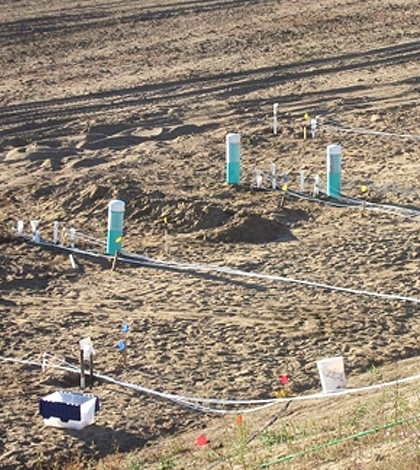 Capturing and storing water is a big deal in drought-stricken California. And with the possibility of a wet winter thanks to the looming El Niño, gathering and keeping whatever precipitation does fall is of extreme importance for water managers and those who rely on the land to grow crops.

One approach, which has received relatively little attention so far in California, is managed aquifer recharge. This technique is linked to the collection of stormwater runoff and uses a variety of methods to capture it. These include utilizing infiltration ponds, aquifers and wetlands in unique mixes to recharge the freshwater sources that people rely on.

Scientists at the University of California, Santa Cruz, are at the forefront of investigating the utility of managed aquifer recharge in helping to alleviate the state’s water woes. And though the approach is not the be-all, end-all solution to problems caused by drought in California, researchers say it has proven itself to be a useful tool through the course of several investigations.

In one field project looking at an infiltration pond used to recharge a shallow aquifer near the Pajaro Valley, researchers at the university set out to make improvements to the water supply and water quality of the area by using the approach. Water that makes it into the pond was diverted from a nearby wetland during the rainy season when flows are high enough and water quality is good. The UC Santa Cruz scientists have since expanded the benefits of this recharge by adding a basin to capture stormwater. A nearby field site owned by the State of California may also be used to recycle wastewater in the future. Another investigation looking into the benefits of managed aquifer recharge considered how it could be used to both address water storage needs as well as reduce nitrate contamination. Scientists at UC Santa Cruz say that, at one recharge site, the nitrate load during infiltration was reduced by about 50 percent. That’s an achievement comparable to reductions yielded by more standard mitigation approaches like buffer strips.

Interestingly, the researchers also found that the rate of denitrification increased along with the rapid pace of infiltration, but only to a point. The scientists still have some questions to answer regarding managed aquifer recharge, including what controls denitrification rates and how recharging aquifers in purposeful ways could be used to clean up dirty stormwater runoff.

Still, they point out that one key advantage of the approach is that it can be used both during drought conditions and through high-flow conditions caused by floods.

So how have researchers gone about studying those different dynamics as well as the effectiveness of managed aquifer recharge overall?

The investigators have designed, built and installed instrumentation at several sites around the Central Coast of California over the years. The equipment they use commonly involves data loggers, sensors to measure water infiltration and GPS receivers that help them amass GIS maps of areas of interest. Since most of the work to install sensing gear is completed when waters are low, it can be hot, hard work. There are typically 10 people in the field on any given day, including representatives of local stakeholder groups that help keep projects going.

Though each aquifer recharge project is unique, scientists from UC Santa Cruz work to find common elements that making approaching other projects easier. They try to take creative approaches, just like water managers throughout California dealing with drought conditions.

Researchers believe that managed aquifer recharge is just one creative way to address water shortages in California and say that it could be used as part of a portfolio of approaches to meet the state’s water needs sustainably in the future.