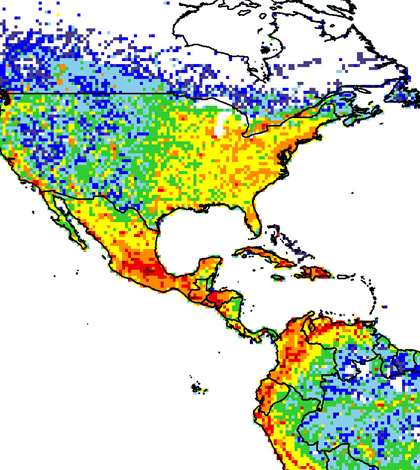 The impact of human activity on water quality is often expressed in terms of agricultural runoff or industrial contamination. But long before the advent of agriculture or industry, another source of anthropogenic pollution has tainted the waters wherever people reside: human waste.

A new study from Michigan State University has produced a map revealing rotavirus emissions into waterways around the world. The map and a paper detailing the study’s finding are published online in the journal Pathogens.

Scientists believe that rotavirus, a fecal pathogen, causes more than 450,000 deaths around the world annually, with children under the age of two being the most susceptible to its effects. The virus exhibits a fast transmission rate and travels via waterways, placing impoverished or developing regions with poor wastewater infrastructure at particular risk.

Until the release of the MSU study, no map showing the spread of the pathogen existed. But Joan Rose, Homer Nowlin chair for water research at the university, saw that a pathogen map could help researchers interpret transmission risks at a regional level.

Of course, developing a qualitative snapshot of any health issue on a global scale poses a challenge, but addressing wastewater pathogens, Rose said, was especially troublesome, as the required data vary in quality — if they exist at all — depending on the source region.

Rotavirus travels via sewage through waterways, and is believed to cause more than 450,000 deaths globally each year. (Credit: Joan Rose / MSU)

Still, Rose says that modern advances in technology allowed the research team to take an “ingenious” approach to mapping the world’s sewage.

“It’s just been recently that we’ve had these computer-based tools, these GIS-based tools, that we can start looking at the broader landscape,” she said. “The data set that we’re developing — it’s got pretty good resolution, down to 100-kilometer grids — it takes population, it takes what we know about wastewater infrastructure, and then it takes clinical data.”

Using data from the World Health Organization (which Rose says “has done a pretty good job” but is still lacking in coverage), the researchers compared a region’s population to its infection and excretion rates to build the model upon which the map is based.

The study and the map were created to address some of the United Nations’ Sustainability Development Goals, one of which seeks to cut “the proportion of the global population without access to safe sanitation in half by 2015,” according to an MSU press release. Joan Rose is the Homer Nowlin chair for water research at MSU, and is lead author on the study. (Credit: K.A. Stepnitz)

“In my view, it’s going to be extremely useful,” Rose said. “This is exactly what we need for decision making.”

Rose said she was surprised to see just how many parts of the map turned up red, representing the highest levels of rotavirus emissions. “It suggests to me that the Earth has a carrying capacity to support these things, but we’re reaching a tipping point,” she said. “It’s making me think about the combination of population growth and a lack of infrastructure keeping up.”

For now, the map is a static tool, but Rose and her co-authors are interested in producing an interactive map with greater resolution and better risk assessment tools. Doing that will require them to work closely with the international hydrology community and consider the implications of a changing climate.

The Global Water Pathogens Project, as the effort is known, will produce a publically accessible database covering 60 pathogens found in human waste, and will detail the current impacts and health effects of those pathogens.

Rose says she hopes the map and future elements of the GWPP will draw attention to the need for adequate wastewater infrastructure, not only around the world but in the U.S. as well, where certain regions still suffer from a lack of sanitation services.

“In this country, we don’t think often about our water and our wastewater system, but it’s all tied together and it’s all part of a cycle,” Rose said. “The fallout of not having a strong wastewater infrastructure is what we see people struggling with in other parts of the world.

“I don’t want to see us travel down that road here in the U.S.”