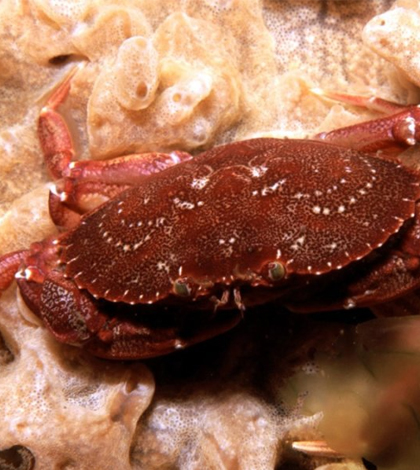 Many marine animals, like this rock crab, could be heading to shallower water with more oxygen. (Credit: J. MacCausland / USGS)

Research using climate models suggests that the combined effects of higher temperatures and lower oxygen will drive many marine animals away from their current habitats to areas with more oxygen, according to in a recent press release from the University of Washington.

Species are expected to move out of equatorial regions to areas where their respiratory needs are easier to meet. Metabolic stress occurs because the higher the temperature goes, the more oxygen marine creatures require to function. But as seas get warmer, they hold less dissolved oxygen.

Species modeled included Atlantic cod, rock crab, sharp snout seabream and the high northern latitude-dwelling common eelpout. Although these creatures live in different types of environments, all were projected to head for more oxygen-rich parts of their environments, which would be shallower water for some and away from equatorial waters for all.

Oxygen levels are projected to be 5-10 percent lower in future marine environments than they are now.

Top image: Many marine animals, like this rock crab, could be heading to shallower water with more oxygen. (Credit: J. MacCausland / USGS)