Marine Vegetation Could Serve as a Buffer Against Increasingly Acidic Oceans 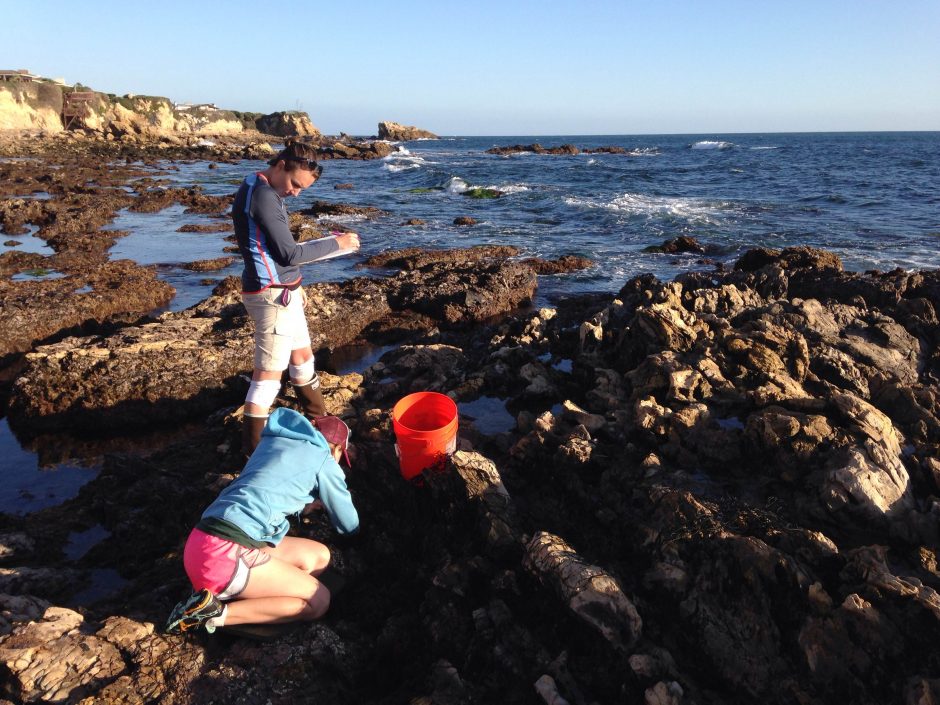 Growing and shrinking with the whims of the tide and weather, pools of sea life dot the rocky shores along America’s west coast. These multilayered pools house tiny ecosystems, each a study in surviving a changing climate. University of California, Irvine (UCI) ecologists have now discovered that the hearty seaweeds and other marine plants and in these shallow coastal pools may help protect more fragile species such as shellfish from the effects of ocean acidification.

UCI Assistant Professor Cascade Sorte of the Department of Ecology and Evolutionary Biology speaks to the inspiration behind this research led by former postdoctoral scholar Nyssa Silbiger.

“Although we know that plants use CO2 as a carbon source and, by so doing, remove it from the atmosphere—or, for submerged vegetation, the water—we know much less about the degree to which this biological process drives variation on very local scales,” Dr. Sorte explains. “This is particularly important in what has been called ‘the Anthropocene,’ when humans are rapidly increasing CO2 levels. We want to know the degree to which local communities, including through photosynthesis, drive and potentially buffer anthropogenic changes in CO2 levels. In marine ecosystems, adding CO2 also leads to ocean acidification (OA), decreasing pH.”

Fluctuating coastal pH is a particularly nagging concern now. OA decreases survival and growth of marine species including shellfish, and there is increasing recognition that marine vegetation may provide refuges from OA.

“As climate change continues and accelerates, the capacity of native ecosystems to buffer local pH conditions can mean life or death for associated species,” comments Dr. Sorte. “This study was unprecedented in its scope, including sites over more than 1,000 miles of coastline from Southern California to Oregon, and a total of almost 60 local communities (tide pools).”

The team characterized the different communities or pools based on their physical attributes such as location, shape, and size, and by the composition of their community—the relative abundance of vegetation versus animals. Focusing on the community metric allowed the team to separate the species based on their relationship with CO2; in other words, they were able to separate plant species that both photosynthesize and respire, taking up and releasing CO2, from the animals that only release CO2.

“We uncovered evidence of some interesting feedbacks during our night sampling,” adds Dr. Sorte. “At night, oxygen became limiting, because all species are respiring but producers are not photosynthesizing and not replenishing O2. Because low oxygen decreased respiration, pH leveled off instead of becoming more and more acidic over the nighttime low tide.”

The team studied tide pools because of their clear value as small, contained systems, which made it much easier to observe the factors that were important to the research questions.

“Tide pools are great systems for studying biophysical feedbacks because we can link causes and effects when the pools are separated at low tide,” explains Dr. Sorte. “They’re like mini aquaria in the field.” Screen shot from “Looking Below the Surface,” an image of 17 macroinvertebrates. (Credit: Brocken Inaglory [GFDL (http://www.gnu.org/copyleft/fdl.html) or CC BY-SA 3.0)

The team sampled the pools about once every hour over the 5 to 6 hours of each of two daily low tides, one during the day and one at night. They were monitoring to determine the rate of change in environmental conditions, including factors of interest such as pH and oxygen. Most of the measurements were taken right there in the field, except alkalinity; the team quantified this value using a titrator in the lab.

The researchers found that pools dominated by producers fare better in terms of pH—even when oceans are increasingly acidic. This is because during the day, these producers photosynthesize, bringing the pH level back up. Thus, “buffer zones” of marine vegetation may be able to protect more delicate species, such as shellfish.

“Our results suggest that marine vegetation could play an important role in buffering local pH conditions, but we did not assess their influence—and we would not expect them to buffer changes—on a global scale,” cautions Dr. Sorte. “The best course of action would be to triage multiple actions to combat climate change, including decreasing emissions at a global scale and protecting local environments that could be helping ecosystems to cope for the time being.”

The team also documented an echoing latitudinal pattern in composition of tide pool communities that runs parallel to our modern understanding of how various species of algae respond to ocean pH.

“Along the west coast of the US, oceanic pH decreases from south to north, with northern sites being more acidic,” Dr. Sorte details. “We found that coralline algae, which are known to be sensitive to OA because they contain hard, calcified tissues, were more abundant in the south, where conditions are less acidic. Fleshy algae (which do not have calcified tissues) were more abundant in the north, where conditions are more acidic. These findings support the expectation that calcifying coralline algae are likely to be some of the ‘losers’ of climate change due to their high sensitivity to climate change. Comparative studies like ours, conducted across gradients in temperature and pH, can give us additional clues about potential impacts of climate change.”

Scientists are not the only people who should take note of this research. These findings may also be of major interest to shellfish fisheries, as the industry struggles to protect itself from oceans that grow more acidic every year, wreaking havoc on the calcium-rich shells of their product. Aug. 4, 2009 – A state inspector checks the water temperature in the cleansing tanks while an FDA shellfish specialist talks to the plant operator. States take the lead regulating the shellfish industry, while FDA monitors and evaluates the state programs and provides training and technical assistance. (Credit: By The U.S. Food and Drug Administration [Safe Shellfish 4649])

“There’s increasing discussion, including at the Catalina Sea Ranch in southern California, about pairing kelp farming with shellfish farming because the kelps might buffer pH conditions and optimize shellfish survival, growth, and economic productivity,” comments Dr. Sorte. “I’m not aware of these ideas being put to practice yet on a large scale, but I wouldn’t be surprised to see a move this direction over the next few years.”

Interestingly, the most common shellfish in these coastal communities—mussels—appeared to be thriving in the most acidic sites. This counterintuitive result may well have been possible because of pH buffering by seaweeds and surfgrasses.

“Both mussels and the vegetation themselves increase coastal biodiversity by creating habitat and forming the base of coastal food webs,” remarks Dr. Sorte. “The benefits to conserving robust populations of these basal and foundational species is, thus, multifold.”

What’s next in this line of research? Pushing the same concepts further in the field with simulations.

“This summer, my lab will be starting a new project to determine how well these communities can cope with future climate conditions,” describes Dr. Sorte. “This project is a collaboration with Matt Bracken (UCI), Kristy Kroeker (UC-Santa Cruz), and Luke Miller (San Jose State University) and will involve simulation experiments in the field. Please stay tuned!”